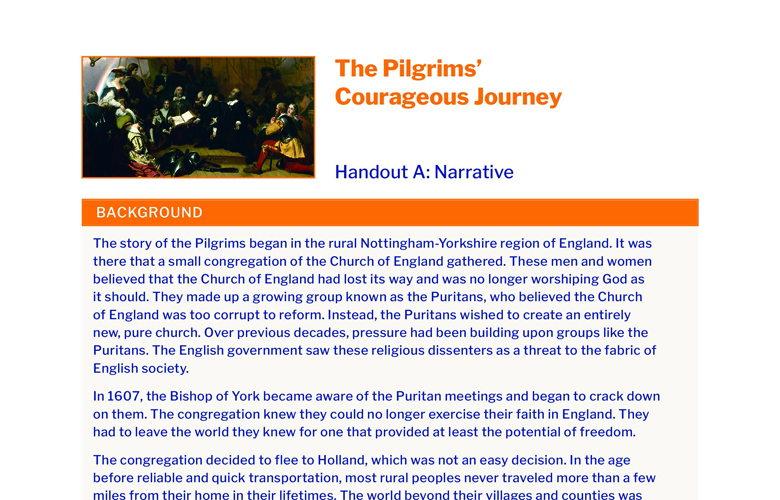 The story of the Pilgrims began in the rural Nottingham-Yorkshire region of England. It was there that a small congregation of the Church of England gathered. These men and women believed that the Church of England had lost its way and was no longer worshiping God as it should. They made up a growing group known as the Puritans, who believed the Church of England was too corrupt to reform. Instead, the Puritans wished to create an entirely new, pure church. Over previous decades, pressure had been building upon groups like the Puritans. The English government saw these religious dissenters as a threat to the fabric of English society.

In 1607, the Bishop of York became aware of the Puritan meetings and began to crack down on them. The congregation knew they could no longer exercise their faith in England. They had to leave the world they knew for one that provided at least the potential of freedom.

The congregation decided to flee to Holland, which was not an easy decision. In the age before reliable and quick transportation, most rural peoples never traveled more than a few miles from their home in their lifetimes. The world beyond their villages and counties was utterly foreign to them. Additionally, the English government would not allow anyone to leave without permission. The congregation fled in secrecy.

When they arrived in Holland, they were greeted by a strange place that differed in culture and size from their home villages. They settled in the city of Leiden, which was home to tens of thousands of people. The busy commercial city was distinctly opposite to the slow-paced and seasonal life the English farmers had grown up in. It was not long before the culture and character of the city began to separate the Pilgrims from the agrarian English values and heritage they prized. Additionally, the English government continued to monitor their activity with the help of Holland’s officials. The Puritans knew they could not stay.

Where could they go and still maintain their heritage and lifestyle? Continued religious and political unrest on the continent of Europe meant moving further inland was not an option. They looked west, to a new and unknown world.

In 1620, the Pilgrims undertook an arduous voyage across the Atlantic to North America. The
settlers had to overcome uncertainty, disease, hunger, cold, and apprehension. The story of the Pilgrims is truly one of determination and courage.

The Pilgrims’ decision to settle in North America created immense challenges. First, they would need permission from the English crown to settle on the lands there. Next, they would need to finance the expedition and find a ship and a crew willing to make the dangerous and long journey. They needed to buy enough supplies to not only get them across the everturbulent north Atlantic but also then have enough to allow them to settle in the new continent. They knew almost nothing of the area they were traveling to. Unknown American Indians, animals, and weather all awaited them on the new shore.

After much diligence, the congregation eventually secured a patent in 1619 from the Virginia Company, a private joint-stock venture which technically owned the land in North America. This patent would allow them to settle in North America while retaining a sense of their English identity.

The Pilgrims set about obtaining a ship and supplies for their voyage. They purchased the Speedwell in Holland and hired passage on another ship from England, the Mayflower. The two ships rendezvoused in Southampton, England in the late summer of 1620 and began to fit out for their journey. They were small, cramped vessels that leaked in heavy seas and lacked any comforts for onboard passengers.

After several weeks of outfitting, the ships set sail for the New World. They were weighed down with supplies and plodded through the rough seas of the English Channel. The Speedwell began leaking so badly that the Pilgrims decided they needed to return to England. It was now mid-August, and the Pilgrims began facing the daunting prospect of a fall crossing and winter landing in the New World. Worse yet, the winds had changed, pinning the sailing ships in the harbor without a chance of getting out.

Weeks later, they set sail once again. The Speedwell sprung another leak, forcing the ships back to port once again. The Pilgrims decided that if they wanted to reach the New World before winter, they would have to leave the Speedwell behind. This meant abandoning a vast amount of supplies, as well as losing the one ship that they owned. Other than costing them a significant amount of money, it also deprived them of a tool that they saw as critical to their success in North America. Once the Mayflower left them ashore, they would be stranded.

Finally, on September 6, they set sail for a third time with as many people and supplies packed into the Mayflower as they dared. The ship was cramped, cold, wet, and miserable. For the next 65 days, the ship worked its way slowly across the North Atlantic. Fierce gales and rough seas battered the Mayflower. Flying spray and water that worked through the seams of the ship soaked the passengers. They suffered from sea sickness, cold, and the frustration of being cooped up around the same people with no reprieve for day after day.

Finally, on November 9, 1620, they sighted land. It was not the Hudson River as they had originally intended, but further north off the sandy coast of Cape Cod. It was there that their true test began. They found themselves off the coast of an unknown and cold shore with nothing but their wits and supplies to sustain them.

Before they landed, the Pilgrim men convened to form a covenant with God and each other. In their founding political document, the Mayflower Compact, they agreed to “solemnly and mutually in the presence of God, and of one another, covenant and combine ourselves into a civil body politic, for our better ordering and preservation . . . to enact, constitute, and frame, such just and equal laws, ordinances, acts . . . unto which we promise all due submission and obedience.” They built a republican government based upon consent.

The Pilgrims built their homes before the cold New England winter set in. They secured food and water while creating protections against possible attacks from local American Indian tribes. Dozens of colonists perished in the harsh winter that followed. By spring, only fifty had survived, and the colony teetered on the edge of collapse. However, they survived and laid a foundation for future settlers by exercising courage in the face of the unknown.