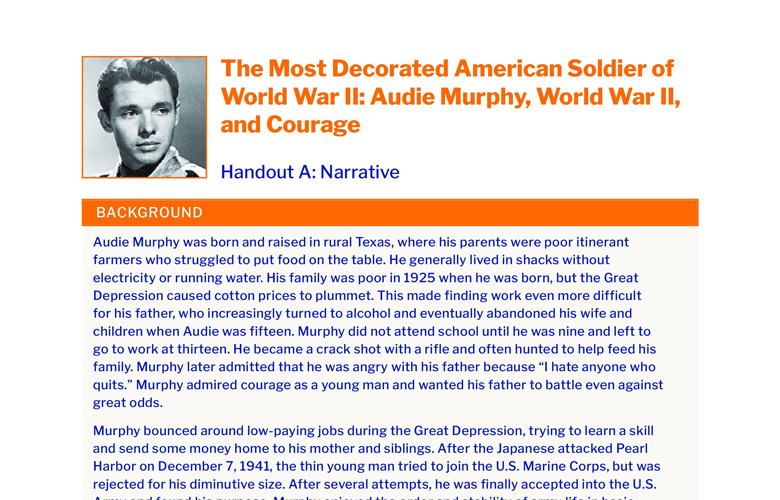 Audie Murphy was born and raised in rural Texas, where his parents were poor itinerant farmers who struggled to put food on the table. He generally lived in shacks without electricity or running water. His family was poor in 1925 when he was born, but the Great Depression caused cotton prices to plummet. This made finding work even more difficult for his father, who increasingly turned to alcohol and eventually abandoned his wife and children when Audie was fifteen. Murphy did not attend school until he was nine and left to go to work at thirteen. He became a crack shot with a rifle and often hunted to help feed his family. Murphy later admitted that he was angry with his father because “I hate anyone who quits.” Murphy admired courage as a young man and wanted his father to battle even against great odds.

Murphy bounced around low-paying jobs during the Great Depression, trying to learn a skill and send some money home to his mother and siblings. After the Japanese attacked Pearl Harbor on December 7, 1941, the thin young man tried to join the U.S. Marine Corps, but was rejected for his diminutive size. After several attempts, he was finally accepted into the U.S. Army and found his purpose. Murphy enjoyed the order and stability of army life in basic and advanced infantry training at various military bases. He easily earned his marksmanship badge because of his expert skill with a rifle.

On February 8, 1943, he shipped out to North Africa, where the United States and its allies had invaded in Operation Torch. The allied effort would continue with the invasion of Sicily and then Italy in 1943. In June of 1944, the Allies invaded Normandy and pushed the Germans out of France before a massive German counterattack at the Battle of the Bulge in December and January, 1944. After defeating the German onslaught, the Allies entered Germany and the Nazis surrendered on May 8, 1945. Murphy fought in North Africa, Sicily, Italy, France, and Germany and his courageous actions made him the most highly decorated American soldier of World War II.

In May 1943, under the blinding North African sun, Private Audie Murphy was frustrated. He was stuck guarding German prisoners from Field Marshal Erwin Rommel’s Africa Korps who had recently surrendered. Murphy had not been in combat yet and was itching to get into the fight.
As novelist and war correspondent John Steinbeck wrote, “No man there knows whether he can take it, knows whether he will run away or stick, or lose his nerve and go to pieces, or will be a good soldier.” Murphy was eager to prove he was courageous.

Murphy would soon get his chance when his division was assigned to participate in the invasion of Sicily in July 1943. There, Murphy proved that he was a good soldier and would courageously
fight. When his platoon was pinned down, Murphy rose up, yelled to the others to follow him, and led a charge up a hill “firing from the hip.” After valiantly taking the hill, he was promoted to corporal two days later.

In late September, his company invaded Italy. There, he and his buddy were pinned down in a ditch before charging a German machine-gun nest and eliminating the threat. By December, he won promotion to sergeant. Murphy was so dedicated to his unit and not appearing that he was
“deliberately trying to avoid the coming action” that he once had to be dragged to the infirmary with a case of malaria and a 105-degree temperature. He recovered and was quickly back in the action where he was promoted to staff sergeant. Murphy admitted to new replacements that, “I’m always scared when we’re up front.” He advised that they should not be ashamed of it, but should not let it rule their actions during a battle.

When his division was pinned down after a successful amphibious landing at Anzio, Italy, Murphy helped the Americans break out of their beachhead with valiant actions. On March 2, 1944, a line of 20 German Mark IV Tiger tanks was moving up a road toward American positions. Thinking quickly, Murphy called in artillery strikes, which temporarily disabled the front tank. The German tank crew tried to repair the tank as darkness settled over the battlefield. Meanwhile, Murphy led a squad out stealthily toward the tank to disable it permanently. As they approached, Murphy then told his men to cover him, and he inched forward alone. He threw a grenade into the tank’s hatch and then crippled the tank by firing several rifle grenades. The Germans in the line responded by raking the terrain with machine guns as the unseen assailant skulked off. Murphy won the Bronze Star with “V” for valor. Two weeks later, hospitalized with influenza, he complained, “My place is up there beside [them].” He praised his fellow soldiers’ courage, stating, “When the chips are down, they do their jobs like men.”

After his division invaded southern France in Operation Dragoon in August after D-Day, Murphy again proved his courage. While several men in his unit were pinned down by German fire from a hilltop pillbox, Murphy sprang into action, climbing the hill and killing two Germans. With bullets whizzing all around him, Murphy ran back up and down the hill several times to retrieve a machine-gun and ammunition. When a sniper shot his friend, he killed two snipers, wiped out the Germans shooting from the pillbox, and cleared the hill of the remaining Germans. For his meritorious and audacious action, he won the Distinguished Service Cross.

In early October, Murphy won two Silver Stars within three days for his courageous actions. In the first, he trailed a reconnaissance patrol because he thought he would see some action. Indeed, it was ambushed and pinned down by eight Germans who wounded several of the Americans. Murphy rushed forward, shooting his carbine and throwing grenades. He killed four of the Germans and wounded the other four before saving the lives of the Americans and getting them back safely to their own lines. Two days later, his company was pinned down by perfectly camouflaged Germans hidden in a stream bed. The next day, Murphy slithered forward on his belly, shot a couple of the enemy, and called in mortar strikes until they won the position, having killed 15 and wounded 35 enemy soldiers. Besides the medals, he was promoted to second lieutenant.

Audie Murphy’s greatest example of courage was during the American counter-attack after the Germans launched the Battle of the Bulge invasion. He had recently rejoined his unit after being shot in the backside, developed gangrene in the wound, and spent nearly two months in the hospital. The ordeal did not slow him down.

On the freezing afternoon of January 26, 1945, in eastern France, Murphy was in a foxhole scanning for Germans as he watched a village through binoculars. Suddenly, two groups of three tanks appeared, aiming for the American position. Moreover, roughly 250 German infantry emerged from the snow wearing white winter jackets. After the German armor knocked out one of the American tank destroyer guns and killed several Americans in the advance, Murphy ordered all of his men to retreat and covered them by leaping atop the burning tank destroyer and firing its fifty-caliber machine-gun. As he raked the enemy troops with bullets and killed dozens, he called in artillery strikes on the enemy. The shells and Murphy’s machine-gun fire killed dozens more Germans as they continued to advance. Murphy grew desperate as the Germans closed, and he called down artillery strikes almost on top of himself. Finally, so many Germans were killed that the tank drivers withdrew. Just as the action ended, Murphy jumped off the burning tank destroyer, and it blew up. For these valorous deeds, Murphy won a Congressional Medal of Honor.

Having been recommended for the Medal of Honor, Murphy was automatically given a job behind the battle lines until the war ended a few months later. He had consistently proven his courage and gone well beyond the call of duty. Audie Murphy could have let others do the dangerous jobs many times, but he persisted in performing heroic deeds that showed his great courage under fire in World War II.