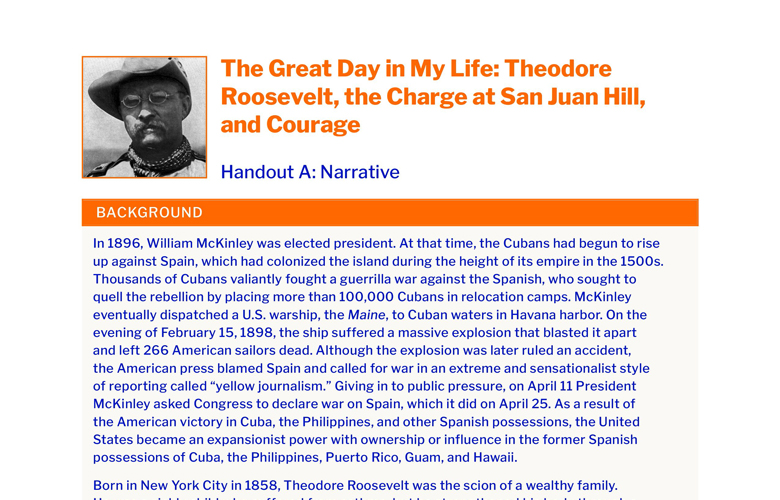 In 1896, William McKinley was elected president. At that time, the Cubans had begun to rise up against Spain, which had colonized the island during the height of its empire in the 1500s. Thousands of Cubans valiantly fought a guerrilla war against the Spanish, who sought to quell the rebellion by placing more than 100,000 Cubans in relocation camps. McKinley eventually dispatched a U.S. warship, the Maine, to Cuban waters in Havana harbor. On the evening of February 15, 1898, the ship suffered a massive explosion that blasted it apart and left 266 American sailors dead. Although the explosion was later ruled an accident, the American press blamed Spain and called for war in an extreme and sensationalist style of reporting called “yellow journalism.” Giving in to public pressure, on April 11 President McKinley asked Congress to declare war on Spain, which it did on April 25. As a result of the American victory in Cuba, the Philippines, and other Spanish possessions, the United States became an expansionist power with ownership or influence in the former Spanish possessions of Cuba, the Philippines, Puerto Rico, Guam, and Hawaii.

Born in New York City in 1858, Theodore Roosevelt was the scion of a wealthy family. He was a sickly child who suffered from asthma, but he strengthened his body through a rigorous program of physical activity. As a young man, he graduated from Harvard and then became a New York Assemblyman, head of the U.S. Civil Service Commission, and the New York City Police Commissioner. However, he was also a rancher out West who loved to test himself against the harsh environment of frontier life. He was a voracious reader and wrote many books and periodical pieces. Roosevelt was the Assistant Secretary of the Navy when the Spanish-American War erupted. When the Secretary of the Navy was away for the weekend, Roosevelt re-positioned American fleets near Cuba and the Philippines to capture the islands quickly in the event of war. Roosevelt fought courageously in the war on the front lines and became a war hero. He was soon elected New York governor, vice-president, and president. Throughout his life, he promoted an active and vigorous life of physical exercise and martial virtue.

On April 25, 1898, Congress declared war, blaming the Maine explosion on Spain. The Assistant Secretary of the Navy Theodore Roosevelt was not content with a desk job ordering fleets around on a map and felt compelled to go to war. He stated, “It does not seem to me that it would be honorable for a man who has consistently advocated a warlike policy not to be willing himself to bear the brunt of carrying out that policy.” Moreover, Roosevelt believed men and nations ought to follow “the soldierly virtues,” and sought to test himself in battle and win glory.

Roosevelt hopped on a train and headed to Texas to join the new First Volunteer Cavalry regiment of roughneck westerners that included cowboys, hunters, wilderness scouts, and Indians. When a few hundred more spots opened, they were filled by Ivy League athletes who also sought to serve patriotically and test themselves. Commander Roosevelt felt comfortable in both worlds as he had attended Harvard but also owned a ranch in North Dakota. They trained in the dusty heat of San Antonio in the shadow of the Alamo. They were known as the “Rough Riders.”

Finally, in June, the regiment loaded their horses and boarded trains for a four-day trip to Tampa, Florida, which served as the embarkation point for troops departing to fight the Spaniards in Cuba. Enduring the confusion of the assembly area, they boarded a stiflingly hot transport ship and were eager to go to war. However, they had to wait for a week because of fears that the Spanish navy was patrolling the waters nearby. Once underway, the Rough Riders sailed for almost another week to their destination as part of a large convoy and landed unopposed on the coast of Cuba. Though many of the cavalrymen were without their horses, they gathered up their packs and started marching.

The Rough Riders from the American West and northeast were not prepared for the tropical heat of the island and left a trail of unnecessary equipment that they shed during their march. The next day, they briefly skirmished with a small Spanish force, which fled. They continued marching along the road to Santiago for a week, persisting through the humidity, swarms of insects, and tropical rain of the jungle.

Roosevelt wrote that July 1 dawned a “Very lovely morning, the sky of cloudless blue” that contrasted with the horrors of war surrounding them. They were on the Santiago plain hemmed in by mountains, making it, Roosevelt thought, “An amphitheater for the battle.” American guns were brought forward and fired at the enemy entrenched on San Juan Hill to the left and the smaller Kettle Hill on the right. “Great clouds of white smoke hung” in the humid air in front of the guns.

The Spanish artillery answered, ripping into the American lines. The hot shrapnel cut down several Rough Riders and men from other units, including many Cuban allies. Roosevelt himself was wounded in the arm but ignored the pain. On horseback and an inviting target for Spanish sharpshooters, Roosevelt ordered the men to advance on the enemy. They forded a small river and halted at a sunken lane for protection. Roosevelt ordered the men to move forward when he encountered a frightened man hiding in a bush. Roosevelt reproached him, stating, “Are you afraid to stand up when I am on horseback?” The embarrassed man felt cowardly and stood up to fight.

The Rough Riders, joined by other regiments, then stormed Kettle Hill, running up the incline yelling and firing their weapons. Wearing a conspicuous sombrero with a polka dot blue handkerchief, Roosevelt had dismounted and led the charge on foot. He was one of the first Americans up the hill as the Spanish poured withering fire into the American and Cuban ranks, killing and wounding several dozen men before being driven off by the allied forces. When the Spaniards atop San Juan Hill fired on the Rough Riders, Roosevelt marched his men down Kettle Hill and prepared to take San Juan Hill.

Roosevelt called to his men to follow him into battle, but few heard him. Thinking that his men accompanied him, Roosevelt began to charge.” Running into battle with bullets whizzing into the grass all around him, Roosevelt noticed only four men had joined him, and one of them was quickly mortally wounded. Angrily, he ran back to his troops and rallied them. Finally, all heard Roosevelt’s orders as he jumped over the fence again and led the charge. Once again, the Rough Riders and other regiments successfully drove the Spaniards off the hill and cheered loudly. The Americans dug into their positions for the night and collapsed exhausted after a day of strenuous fighting.

During the battles on Kettle Hill and San Juan Hill, more than 200 Americans were killed with several hundred wounded, and an unknown number of Cuban casualties. Theodore Roosevelt’s courage had struck many of his men, although the Rough Riders were a group of hard men who were generally not easily impressed. One noted, “He was the most conspicuous figure in the charge” up San Juan Hill. Another enraptured man stated that Roosevelt’s courage “made you feel that you would like to cheer” even in the middle of a frightful battle. He had won his men’s admiration, and they adopted the polka dot blue handkerchief as their badge because they
believed it brought them great honor to fight under the valiant Roosevelt.

Theodore Roosevelt was a comfortable politician and wealthy individual who could have stayed at home and sent other men into battle. Instead, Roosevelt wanted to test his courage in battle and see whether he measured up to his own heroic ideals. He bravely passed the test and was proud of his accomplishment. “I feel that I have done something which enables me to leave a name to [the] children of which they can be rightly proud.” In short, looking back over his colorful career in which he served as New York governor, vice president, and president, Roosevelt stated, “San Juan was the great day in my life.”