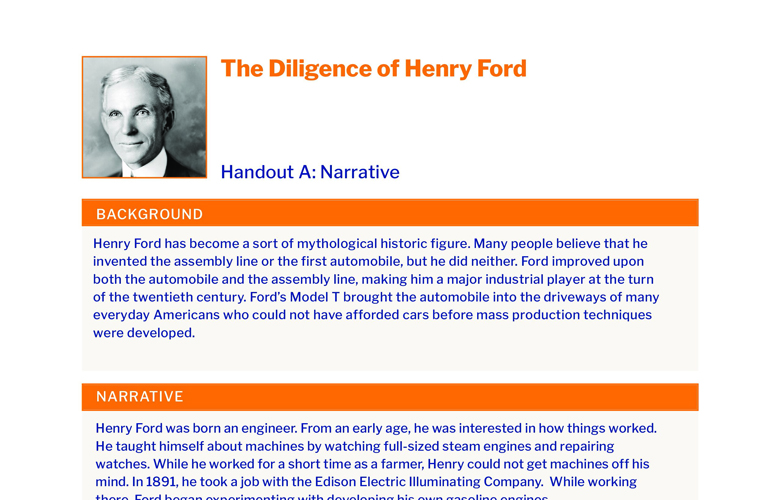 Henry Ford has become a sort of mythological historic figure. Many people believe that he invented the assembly line or the first automobile, but he did neither. Ford improved upon both the automobile and the assembly line, making him a major industrial player at the turn of the twentieth century. Ford’s Model T brought the automobile into the driveways of many everyday Americans who could not have afforded cars before mass production techniques were developed.

Henry Ford was born an engineer. From an early age, he was interested in how things worked. He taught himself about machines by watching full-sized steam engines and repairing watches. While he worked for a short time as a farmer, Henry could not get machines off his mind. In 1891, he took a job with the Edison Electric Illuminating Company. While working there, Ford began experimenting with developing his own gasoline engines.

He continued to improve upon his designs and opened his own company, Detroit Automobile Company, in 1899. However, Ford’s first attempt at his own company was not successful and it closed two years later. He would not give up, knowing that he could find a way to make an inexpensive and reliable car. Ford started yet another business in 1901, this time naming it the Henry Ford Company. When his colleague brought in another consultant, Henry decided to leave rather than compete with another’s ideas. Yet another company, Ford & Malcomson, Ltd., began, but sales were slow and Ford and his partners could not pay their bills.

Instead of closing his doors, Ford convinced his financial backers to give him another chance. In 1903, the company reopened as the Ford Motor Company. While other Ford automobiles, like the Model A and Model N, were somewhat successful, Henry’s goal to develop a cheaper automobile finally came to fruition with the Model T in 1908. People clambered for the new car because it was easy to drive and cheap enough for a middle class family to purchase.

People who drove Model Ts began to join auto clubs and local dealerships began to spring up in neighborhoods across the country. As sales increased, the price of the car decreased. Ford wanted to increase production as much as possible, and he used many new techniques to improve the way his cars were made. He helped perfect the moving assembly line and introduced $5 per day wages to his employees to keep them on the job. This jump in pay allowed the people who worked for Ford to buy one of his automobiles themselves.

By pursing his dream to build a cheaper car and run an effective company, Henry’s diligence helped his employees become middle class citizens who could contribute to the economy. Ford employees’ pay was nearly double that of the average factory workers, and this rate of pay helped reduce turnover. With less turnover, there was less need to train new employees, further increasing productivity. Ford also offered profit-sharing to his employees so that they could benefit from the success of the cars that were being built and sold in record numbers.

Henry Ford’s popularity skyrocketed, and he was asked by President Woodrow Wilson to run for the United States Senate seat in Michigan in 1918. Ford lost the race, but he continued to fight for his principles throughout his life. As a pacifist, he opposed American involvement in both World Wars. Despite this, after the attack on Pearl Harbor in 1941, Ford’s Willow Run plant held the largest assembly line in the world and began building airplanes, engines, and tanks for the United States war effort.

The Ford Motor Company revolutionized factory work in the modern era and changed the way that people lived. More Americans had the ability to travel and see their great country as they drove in their Model Ts, and many who worked for Ford knew a standard of living they had never before experienced. It was because of Henry Ford’s diligence and willingness to take risks to be successful that he was able to build an empire that has lasted over 100 years.