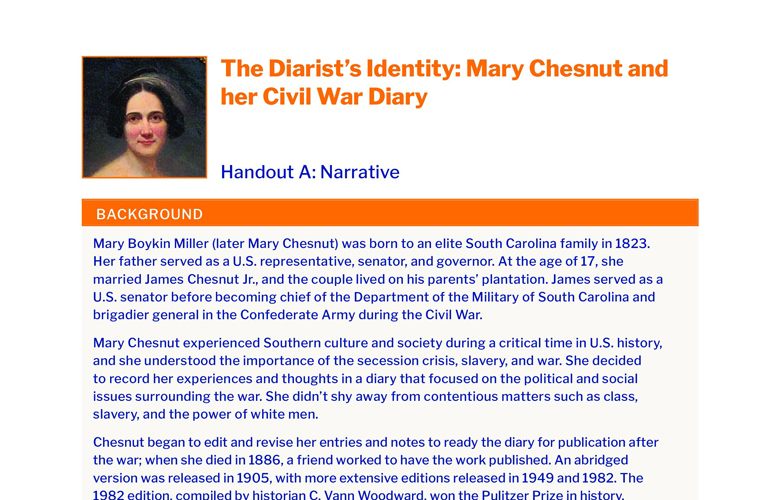 Mary Boykin Miller (later Mary Chesnut) was born to an elite South Carolina family in 1823. Her father served as a U.S. representative, senator, and governor. At the age of 17, she married James Chesnut Jr., and the couple lived on his parents’ plantation. James served as a U.S. senator before becoming chief of the Department of the Military of South Carolina and brigadier general in the Confederate Army during the Civil War.

Mary Chesnut experienced Southern culture and society during a critical time in U.S. history, and she understood the importance of the secession crisis, slavery, and war. She decided to record her experiences and thoughts in a diary that focused on the political and social issues surrounding the war. She didn’t shy away from contentious matters such as class, slavery, and the power of white men.

Chesnut began to edit and revise her entries and notes to ready the diary for publication after the war; when she died in 1886, a friend worked to have the work published. An abridged version was released in 1905, with more extensive editions released in 1949 and 1982. The 1982 edition, compiled by historian C. Vann Woodward, won the Pulitzer Prize in history.

South Carolina’s social circles revolved around slaveholding landowners in Charleston and Columbia. As a young girl, Mary Miller attended Madame Talvande’s French School for Young Ladies in Charleston to prepare for life as a member of this society. While there, Miller studied literature, rhetoric, sciences, and history.

When she was 13, she met James Chesnut Jr., a member of an elite southern family that owned a
vast estate in North Carolina. Mary’s father moved the family to Mississippi soon thereafter, in part to split the young couple up. It was there that the young woman’s ideas about life and society began to change. For the first time, she started to consider the enslavement of African Americans and the treatment of Native Americans as unjust.

Despite the separation, Mary and James married in 1840, and the couple moved to his parents’
plantation, Mulberry. There, Mary spent the majority of her time reading. The boredom of estate life began to wear on her health, and within a few years, the Chesnuts moved into a house in Camden, S.C. There, James served for a time as a South Carolina representative and senator. Mary helped James with his writings and speeches as a politician, but she didn’t always agree with his positions. She supported states’ rights and the South’s right to secede, but was against slavery and advocated for gradual emancipation.

When James was elected to the U.S. Senate in 1858, the couple moved to Washington, D.C, where
Mary became involved with the political society. After Abraham Lincoln was elected president in 1860, however, James resigned his Senate seat. The Chesnuts returned to South Carolina, where James served at the secession convention and the writing of the Confederate constitution. Mary Chesnut understood that she was living through a significant time in history, and decided to record her thoughts and observations in a diary, which she kept from 1861 until the end of the Civil War in 1865. James took a position as an officer in the Confederate Army, serving as an aide to General Beauregard during the siege of Fort Sumter. Mary was also in Charleston when the first shots were fired, writing a detailed description of her experience watching the attack from a rooftop.

Mary followed James to many of his posts during the war, allowing her to mingle with leaders of the Confederacy. Her diary reflected the changing lives of those who lived in and fought for the South. She delved into issues of class, race, and gender. For example, her work described the problems that arose when white male slave owners had children with female slaves as well as the expected subordination of southern women. She understood the significance of the war and the effect it had on southern society. Writing and describing these issues made Chestnut more self-aware and affected the way she viewed her own life.

After the war, Mary and James returned to Mulberry, but their way of life had changed. James
went back to local politics, but when his father died in 1866, the Chesnuts were left in debt. Mary Chesnut began to write novels, and in 1876, she decided to start editing her diaries for publication. Her initial edits were insufficient to reduce the book to a publishable size, and she also feared that some of the more controversial entries would cause her to lose her social standing. She continued to polish the diary for years, removing personal entries and filling in gaps.

Prior to her death, Chesnut gave a draft of the diary to a friend, Isabella Martin, to have it published. Mary passed away in 1886 from a heart attack, and the first version of her journal was printed in 1905. Chesnut recorded her thoughts so others would understand the issues that southerners faced. Her identity as a member of southern society influenced her writing but also affected later generations’ understanding of southern culture and practices.