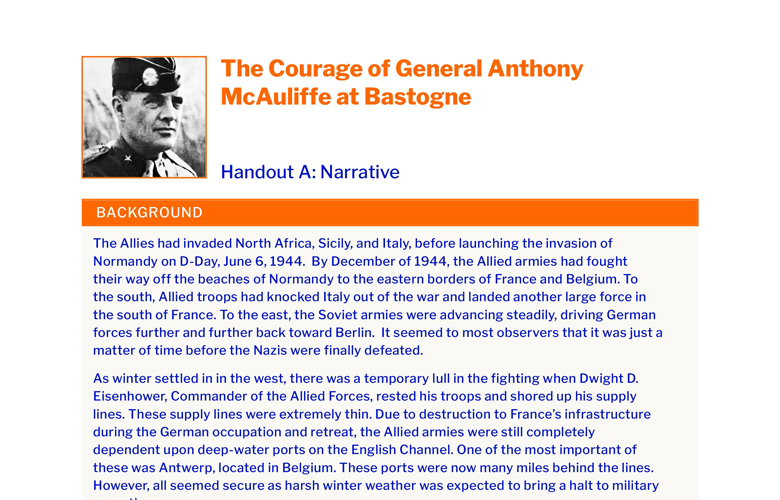 The Allies had invaded North Africa, Sicily, and Italy, before launching the invasion of Normandy on D-Day, June 6, 1944. By December of 1944, the Allied armies had fought their way off the beaches of Normandy to the eastern borders of France and Belgium. To the south, Allied troops had knocked Italy out of the war and landed another large force in the south of France. To the east, the Soviet armies were advancing steadily, driving German forces further and further back toward Berlin. It seemed to most observers that it was just a matter of time before the Nazis were finally defeated.

As winter settled in in the west, there was a temporary lull in the fighting when Dwight D. Eisenhower, Commander of the Allied Forces, rested his troops and shored up his supply lines. These supply lines were extremely thin. Due to destruction to France’s infrastructure during the German occupation and retreat, the Allied armies were still completely dependent upon deep-water ports on the English Channel. One of the most important of these was Antwerp, located in Belgium. These ports were now many miles behind the lines. However, all seemed secure as harsh winter weather was expected to bring a halt to military operations.

In this, German planners saw an opportunity. If they could secretly mass a large offensive in the west and punch through the thinly held Ardennes region of the Allied line and capture Antwerp, they could divide the Allied armies and cut their supply lines, making them ineffective as fighting units. With this accomplished, the Germans could drive the Allies out of Europe, or at the very least negotiate peace. It was a desperate gamble. On Hitler’s orders, German planners gathered what reserves they could and prepared to attack.

It was the worst winter in living memory. Cold winds swept down from the north, enveloping the continent of Europe in a thick blanket of snow and ice. Exhausted Allied troops were stretched across the length of the eastern border of France. For six months, they had fought bitterly to gain a foothold in Europe, suffering thousands upon thousands of casualties. It was nearing the end of the third year of the war for the United States, and the prospect of yet another Christmas away from home was on the minds of the men in the cold and muddy foxholes all along the front. They relaxed despite the miserable conditions, believing no army would attack in such weather.

One division, in particular, was glad for the lull in fighting brought on by the cold weather. Temporarily under the command of General Anthony McAuliffe, the 101st Airborne Division had suffered heavy losses the previous year. Known as the Screaming Eagles, these men and their fair share of combat. They had been dropped behind enemy lines in the pre-dawn hours of June 6 as the vanguard of the Allied invasion of Normandy. They had fought bitterly to capture key road junctions and towns that allowed the infantry landing on the beaches to move inland. They continued to fight the German army for weeks after, slogging through the thick hedgerows of the French countryside in the ferocious Allied push to break out of Normandy.

After a brief rest in England, the division again saw heavy combat in September in Operation Market Garden. This operation was a high-risk attempt at capturing Holland by seizing a series of bridges. The 101st’s mission was to help secure a middle series of bridges while the British airborne would secure the final set of bridges that led into Germany. However, this tenuous path into Germany proved to be much more heavily defended than British planners anticipated. After days of fierce fighting, it became clear that the mission was a disaster. The 101st was given the unenviable task of covering the retreat of the Allied armies along a section of road that became known as “Hell’s Highway.”

General Anthony McAuliffe had participated in all of these campaigns. By 1944, McAuliffe was the commander of the division artillery. Though he broke his back during a practice jump in May, he still went into Normandy with the rest of the division on June 6. During the landings, Brigadier General Don Pratt was killed, leading McAuliffe to be promoted to the position of Assistant Division Commander. In this role, he participated in Operation Market Garden in September of 1944, fighting with the division through the terrible conflicts in Holland.

Thus, McAuliffe found himself with the 101st Airborne that cold December with the battleweary veterans of the division. He had temporarily been placed in command of the division while commanding General Maxwell Taylor attended a staff conference back in the United States. The division was in reserve, resting and re-equipping after the hard fighting that fall. All signs seemed to point to a quiet holiday season for the troops.

Suddenly, on December 17, the Germans launched a massive offensive. Thousands of men, tanks, and trucks had been massed in secret along the Ardennes forest and struck a stretched out and exhausted Allied line like a bolt of lightning. The quiet, snow-covered woods were filled with the squeaking of tank tracks, the roar of engines, and the sharp crack of rifle fire. The German attack quickly overran the inexperienced troops in that sector, inflicting heavy casualties. General Eisenhower swiftly moved to strengthen his line at the point of the attack. He repositioned the 10th Armored Division and then moved forward his reserves, including the 101st Airborne.

McAuliffe must have been feeling shock and doubt that cold evening as his men moved forward. He was only a temporary commander. Would he have the full respect of his commanders and his soldiers? Many had assumed the Germans were all but defeated. How could they be attacking? How large was their force? How well-prepared was the division for combat? Soon, McAuliffe would have all of his questions answered.

The division dropped everything they were doing, grabbed their gear and some ammunition, and rushed by truck to the area around the city of Bastogne on December 18. An ominous cloud of uncertainty hung over them. McAuliffe realized the division was drastically unprepared. They were short on food, medical supplies, and ammunition. They had not needed to stock up on these supplies in the previous weeks as they were stationed close by the supply depots. Perhaps worst of all, they had not been issued their winter clothing. They advanced quickly into a chaotic atmosphere, made even more confusing by German troops in American uniforms deliberately sent forward to disrupt Allied relief efforts.

McAuliffe deployed his men in the woods around the city of Bastogne. They dug into the frozen ground and prepared for the worst. The next several days saw fierce fighting that ebbed and flowed around the city. The Germans advanced relentlessly with tanks and heavy artillery bombardments, and McAuliffe coolly directed the defense of the city. The weather aided the German advance as thick fog, snow, and clouds prevented the Allies from receiving supplies or martial assistance from the air. Nevertheless, McAuliffe and his men fought back tenaciously.

By December 22, the defenders around Bastogne were surrounded and drastically low on supplies. The commander of the German forces sent a message to General McAuliffe demanding he surrender. “The fortune of war is changing” it read. “There is only one possibility to save the encircled U.S.A. troops from total annihilation: that is the honorable surrender of the encircled town.”

General McAuliffe knew the situation was desperate and that his men were barely holding the line. He was isolated, completely cut off from his senior commanders, and faced a seemingly endless German assault. In every modern tactical sense, the Americans had lost. To continue to resist could mean complete annihilation. However, McAuliffe also knew that his resistance was critical if the Allies were to have enough time and space to recover and launch a counter-attack.

McAuliffe hardly hesitated in answering the Germans. He sent a one-word reply that indicated there would be no surrender. The Americans would fight on to the end. In the face of great danger, with everything on the line, McAuliffe did not back down or hesitate.

His response was read out to all the men under his command. His example inspired those men to stand fast and hold out just a little longer. They courageously fought on until General Patton’s Third Army finally relieved them on January 2.

McAuliffe never lost faith in his men or his cause. The Allies desperately needed to slow the German attack so they could reorganize and respond. The defense of Bastogne helped slow
the German advance. In overcoming the challenges of being in a temporary command, of moving into an unknown position, lacking supplies or support, and fighting on when completely
isolated, McAuliffe epitomized the virtue of courage at a time when it was needed most. The
courage, determination, and tenacity of the general and the men under his command were essential to the Allied effort and defeating the Nazis.