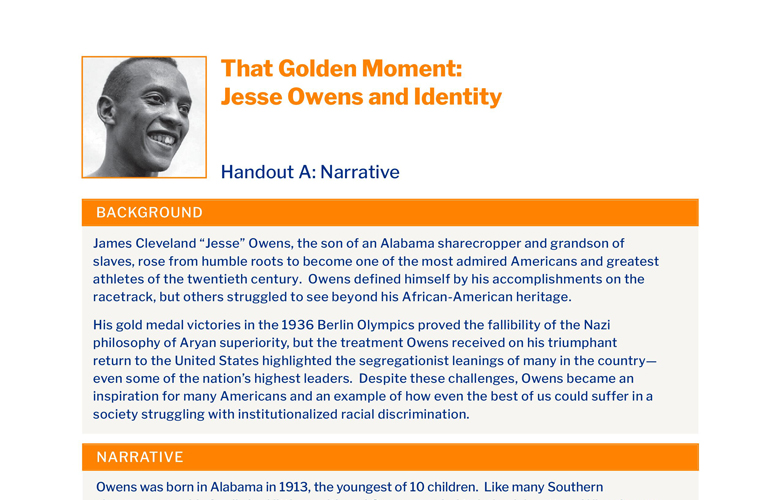 James Cleveland “Jesse” Owens, the son of an Alabama sharecropper and grandson of slaves, rose from humble roots to become one of the most admired Americans and greatest athletes of the twentieth century. Owens defined himself by his accomplishments on the racetrack, but others struggled to see beyond his African-American heritage.

His gold medal victories in the 1936 Berlin Olympics proved the fallibility of the Nazi philosophy of Aryan superiority, but the treatment Owens received on his triumphant return to the United States highlighted the segregationist leanings of many in the country— even some of the nation’s highest leaders. Despite these challenges, Owens became an inspiration for many Americans and an example of how even the best of us could suffer in a society struggling with institutionalized racial discrimination.

Owens was born in Alabama in 1913, the youngest of 10 children. Like many Southern sharecroppers, his family had little wealth and Owens needed to help pick cotton. When he was nine, Owens’ family moved to Cleveland, where his father and brother got better-paying, more secure jobs in heavy industry. Owens also had to work to support his family, holding a variety of jobs while attending school.

In middle school, the young boy discovered what would become a lasting love of track and field. By the time he entered high school, Owens was a nationally acclaimed athlete, tying the record for the 100-yard dash. His accomplishments on the field led him to join Ohio State University’s athletics program, where he continued to break records. Known as the “Buckeye Bullet,” Owens won eight NCAA championships.

Before one match, Owens injured his back, limiting his mobility for several days. His teammates advised him to withdraw from the competition, but Owens competed, setting three world records and tying a fourth.

While his athletic accomplishments multiplied, life away from the track was much harsher. The university did not offer Owens an athletic scholarship, who needed to work at night to pay for his education and support his wife and child. When the track team traveled for competitions, he was forced to stay in blacks-only accommodations and eat his meals in segregated restaurants. Though Ohio was not in the South, Owens was still prohibited from living on campus because of his race.

In 1936, Owens traveled to Berlin as a member of the United States Olympic team. Adolf Hitler and the ruling Nazi Party believed in the superiority of the Aryan race. African Americans such as Jesse Owens were considered inferior and incapable of the intellectual and physical feats performed by their white counterparts. The Nazis expected that Aryan athletes would dominate the games, demonstrating the superiority of German society.

With Hitler observing, Owens beat his German competitors and won four gold medals. Despite the international acclaim, his reception in the United States was much cooler. He was not invited to meet President Franklin D. Roosevelt as other Olympic medalists were, nor did he receive any acknowledgment or congratulations from the White House. While in Germany, Owens had been afforded the same rights and privileges as his fellow white athletes. In the United States, however, he was subject to a system of segregation which denied him equal rights. He could not ride at the front of the bus, enter businesses through the front door, stay at whites-only hotels, or live in white neighborhoods. When Owens left international competition to pursue endorsement offers, officials stripped him of his amateur status and barred him from competing in future Olympic events.

For many years, Owens struggled financially. In 1946, he helped found a Negro baseball league, but it quickly folded. He then became a sports promoter and even ran races against horses and cars. In time, Owens found a second calling as a motivational speaker, sharing his experiences as an Olympic champion and telling of his struggle to overcome racial discrimination in the pursuit of athletic excellence. Owens left audiences enraptured, and he was soon appointed a United States goodwill ambassador, traveling the world to share his story of triumph despite adversity.

Jesse Owens remains a leading example of an individual who never abandoned his African American identity in a society that sought to prevent upward mobility for his race. By winning
four gold medals in the 1936 Berlin Olympics, Owens decisively proved to the world the fallacy of the doctrine of white racial supremacy and brought attention to the need for extending equal rights to all individuals, no matter their origin. Similarly, he never lost his identity as a champion athlete, even after his Olympic career had finished. During times of adversity, he remembered what he had already achieved and could yet accomplish. Looking back on his life, Owens observed, “Time has stood still for me. That golden moment dies hard.”