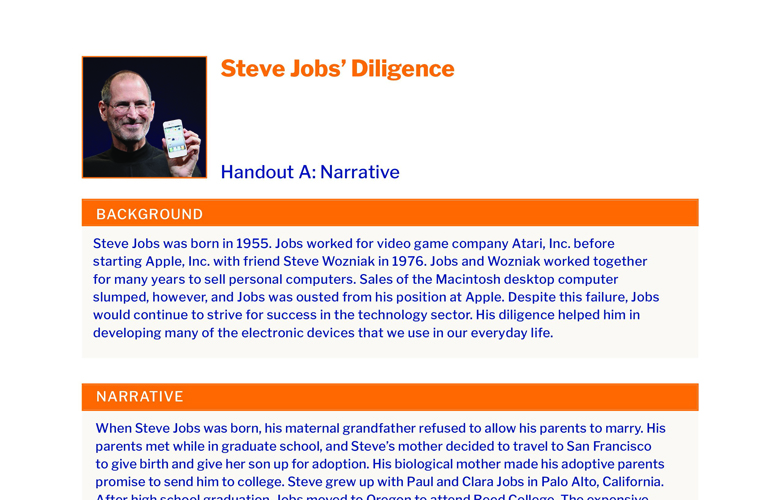 Steve Jobs was born in 1955. Jobs worked for video game company Atari, Inc. before starting Apple, Inc. with friend Steve Wozniak in 1976. Jobs and Wozniak worked together for many years to sell personal computers. Sales of the Macintosh desktop computer slumped, however, and Jobs was ousted from his position at Apple. Despite this failure, Jobs would continue to strive for success in the technology sector. His diligence helped him in developing many of the electronic devices that we use in our everyday life.

When Steve Jobs was born, his maternal grandfather refused to allow his parents to marry. His parents met while in graduate school, and Steve’s mother decided to travel to San Francisco to give birth and give her son up for adoption. His biological mother made his adoptive parents promise to send him to college. Steve grew up with Paul and Clara Jobs in Palo Alto, California. After high school graduation, Jobs moved to Oregon to attend Reed College. The expensive college put a strain on his parents and he was not fully invested in attending college, so Jobs dropped out after one semester. However, his lack of a higher education did not affect his decision to make something of himself.

Steve and his father had tinkered with electronics when Steve was young, and Steve’s love for inventing continued after he left college. In 1972, Jobs accepted a position at Atari, a video game company. After a sojourn to India, Jobs was asked to help Atari minimize the number of chips in the circuit board of a video game. He turned to his old friend, Steve Wozniak, for help. “Woz,” as he was known, was able to reduce the number of chips and the two teamed up.

Jobs joined a group called the Homebrew Computer Club with Woz and began to be more interested in the development of computers. In 1976, Woz developed a computer he called the Apple I and showed it to Jobs. Jobs was impressed with the computer and thought they would sell. The two men founded Apple Company in Jobs’ parents’ house, where they put the computer boards together. Jobs worked diligently to secure investors for the new endeavor while Woz built an even better version of his computer. The new computer, Apple II, would break all sales records on computers and make Jobs and Woz millionaires.

The next Apple computer product, the Lisa, (named after Jobs’ daughter) brought about great contention between Steve and the team. Steve was removed from the project and he instead took over development and management of a smaller project—the Macintosh. Steve decided that this new computer would be a smaller, more user-friendly version of the Lisa, complete with a mouse. Steve drove his team to make a computer that the common person would be able to use. He worked day and night to push the project to success. The Macintosh was launched in 1984 with great flourish, but sales numbers only remained high for a few months. The lack of success drove a wedge between Jobs and the rest of Apple. Steve was removed from his duties and only remained chairman of the board of the company he helped found. In September 1985, he left Apple and started his own company, NeXT.

NeXT’s foray into personal computer building did not go as well as Jobs had planned. Other companies had already developed high-functioning and cheaper models and NeXT couldn’t keep up. In 1986, Jobs purchased Pixar, which had been the graphics division of Lucasfilm. At first, the company focused only on selling graphics workstations, but after they won an Academy Award for a computer-animated short film, Jobs saw Pixar’s potential. Pixar released its first full-length movie, Toy Story, to great acclaim in 1995. Jobs’ diligent work paid off. After the movie’s release, he took Pixar public, meaning people could buy shares of the company on the stock market. Steve was now worth over $1.5 billion as holder of eighty percent of Pixar.

Meanwhile, Apple was struggling ever since Jobs had left the company. In 1996, a new CEO was hired and Steve convinced him to buy NeXT. With this purchase, Steve was back at the company he had founded two decades before. In 1997, Steve was named CEO of Apple and proceeded to revolutionize the company.

In the years following Steve’s ascent to CEO, Apple released the extremely popular iMac computer. This computer was colorful, compact, and appealed to multiple generations. Steve was also instrumental in the development of the iPod mp3 music player and iTunes. He also oversaw the release of the iPhone smartphone and the iPad tablet computer. Steve’s diligent work brought Apple back from the brink of failure to be one of the greatest technology companies in the world.

In 2003, Jobs learned that he had pancreatic cancer. Over the next few years, his health began to decline, but he continued to hold speaking engagements, introduce new products, and attend conferences. He took two leaves of absence from Apple before resigning in 2011. He continued to work until his death in October 2011.