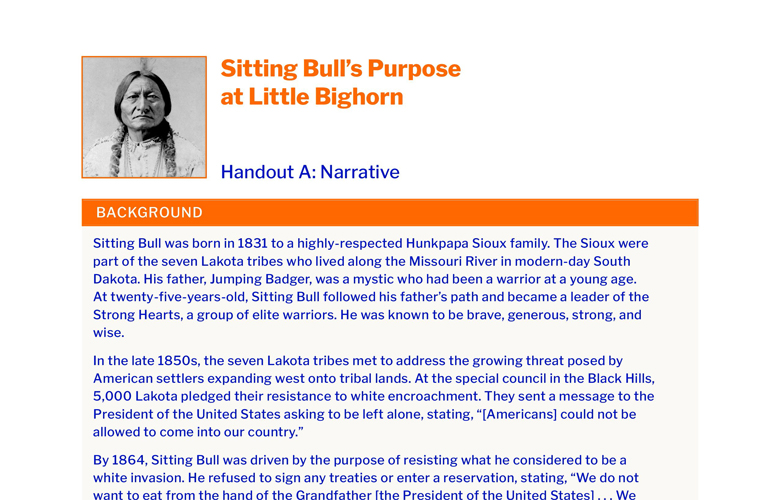 Sitting Bull was born in 1831 to a highly-respected Hunkpapa Sioux family. The Sioux were part of the seven Lakota tribes who lived along the Missouri River in modern-day South Dakota. His father, Jumping Badger, was a mystic who had been a warrior at a young age. At twenty-five-years-old, Sitting Bull followed his father’s path and became a leader of the Strong Hearts, a group of elite warriors. He was known to be brave, generous, strong, and wise.

In the late 1850s, the seven Lakota tribes met to address the growing threat posed by American settlers expanding west onto tribal lands. At the special council in the Black Hills, 5,000 Lakota pledged their resistance to white encroachment. They sent a message to the President of the United States asking to be left alone, stating, “[Americans] could not be allowed to come into our country.”

By 1864, Sitting Bull was driven by the purpose of resisting what he considered to be a white invasion. He refused to sign any treaties or enter a reservation, stating, “We do not want to eat from the hand of the Grandfather [the President of the United States] . . . We can feed ourselves.” He also joined the fight against white armies sent to the Dakotas and assaulted forts that were built there.

In June 1876, Sitting Bull had small pieces of flesh ritualistically taken from his arms, followed by hours of dancing, during the most sacred of Lakota religious ceremonies. Suddenly, he stopped dancing and held his gaze to the heavens, receiving a prophetic vision while communing with the Great Spirit Wakantanka. He described a vision that included white soldiers and their horses above an Indian village falling upside down, which signified death. Some of the Indians in the village were falling upside down but not as many. It was a great victory over the encroaching enemy. The forty-five-year-old warrior would soon ride out to lead and encourage his warriors to fulfill the prophecy at Little Big Horn.

Sitting Bull was lying in his lodge in the tribal circle when he received word that the American army was attacking. He was in the middle of a massive encampment where men, women, and children were staying in a thousand teepees. He ordered the women and children to move away from the battlefield while dozens of warriors rode their horses and whipped up a large dust cloud to cover the movement. Sitting Bull climbed atop a black horse and rode out to encourage his warriors, who plunged into battle. Sitting Bull was pleased to have such a strong army of Cheyenne, Hunkpapa Sioux, and Lakota Sioux warriors to face the Americans in battle.

Major Marcus Reno of the United States Army had charged Sitting Bull’s village at about three o’clock in the afternoon in the hills of southern Montana. Reno was shocked when he saw the unexpectedly large village. He thought it was going to be easy to ride through the encampment, slaughter its inhabitants, and force the surrender of any survivors. That was not to be the case. Changing plans, he ordered his cavalry troops to dismount and charge the Sitting Bull’s warriors, who were mobilizing quickly to defend against the American “bluecoats.” Reno’s troops quickly lost their discipline as the line wavered and their fear grew. The Americans were overwhelmed and retreated chaotically. They hid in some nearby woods but were picked off by Indian riflemen and bowmen. Deadly projectiles zipped by from every angle. Reno galloped off as the situation descended into chaos and the panicked Americans were picked off in the pell-mell retreat.

Sitting Bull treated his enemies with respect. He came across one U.S. soldier that he knew and magnanimously told his warriors, “Don’t kill that man; he is a friend of mine.” He even dismounted and gave the wounded man some water before riding off back into battle. At that moment, U.S. General George Custer surveyed the battlefield and prepared to launch the bulk of his army to the northwest toward the Lakota village while a subordinate moved forward in a feint to draw the Indians into a place where Custer would wipe them out. Captain Frederick Benteen was ordered to relieve the pressure on Reno’s men and advance up the river valley to reinforce Custer. With the plan set, General Custer advanced beyond the Sitting Bull’s village to what became known as Last Stand Hill. Meanwhile, Sitting Bull urged hundreds of warriors to flood the hills around Custer’s army and surround them.

Custer’s army was quickly surrounded and suffered withering rifle fire from Native Americans riding on horseback or appearing everywhere from behind rocks on the hills. Custer organized a force to break through to the Little Big Horn River below, but there were too many enemies. Custer lost the initiative, and the men of his army were trapped.

Custer deployed his men on the summit of the hill and ordered all the horses to be shot so that they could create grisly, primitive breastworks for protection as they fired. He sent out a skirmish line to drive the Lakota warriors back, but few returned alive. Custer’s men fought desperately for their lives and killed many. However, Custer was soon shot in the left breast before another bullet slammed into his head, taking his life. Some of his men committed suicide rather than submit to a torturous death at the hands of the Native Americans. Soon, they were all dead. The enemy captured their battle flags, stripped the dead soldiers, and put on their clothes in celebration.

To the southeast, Benteen’s men met up with the remnants of Reno’s force. Sitting Bull ordered his warriors to kill the last of the Americans, and soon hundreds of Lakota assaulted the hill. The Americans were thirsty and frighteningly low on ammunition as they endured the attack. Their comrades were steadily dropping as the brilliant colors of the setting sun filled the valley. Soon, darkness fell and the enemy fire slowly faded. None of the American soldiers could sleep, and the men dug in with spoons and plates to build shallow trenches for the battle that was expected in the morning.

At dawn, Benteen called the trumpeters to sound reveille as the hail of fire commenced. All that day, the two sides exchanged deadly fire and the American numbers gradually diminished. Benteen inspired his men, stating, “When the bullet is cast to kill me, it’ll kill me, that’s all.” Reno, for his part, led a charge that drove off an abundance of enemy warriors. They miraculously held out until Sitting Bull decided to depart. The massive procession of Lakota tribes marched off. Another frightening and sleepless night passed as the American troops expected a ruse and thought the enemy would kill them in the darkness. Finally, a relief column of Americans entered the valley the next day and found the grisly scenes of battle. Eventually, they found Custer’s body and buried 204 soldiers. Sitting Bull’s vision had come true and his purpose fulfilled at Little Big Horn. He had won, at least for a short time, the independence and freedom he desired.