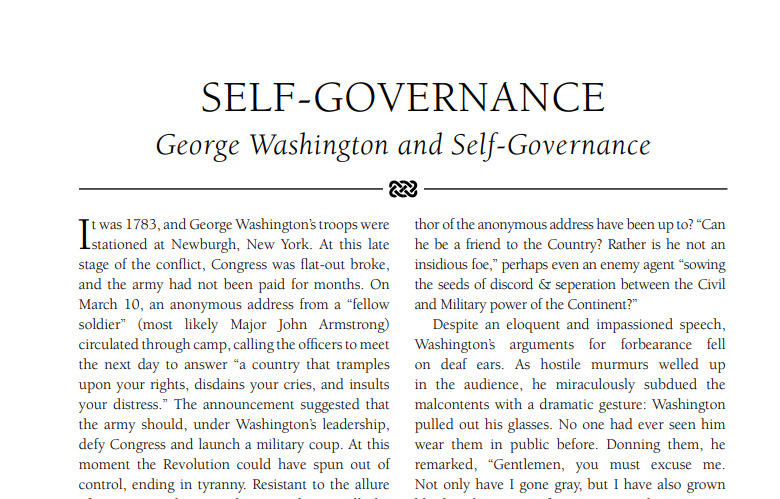 It was 1783, and George Washington’s troops were stationed at Newburgh, New York. At this late stage of the conflict, Congress was flat-out broke, and the army had not been paid for months. On March 10, an anonymous address from a “fellow soldier” (most likely Major John Armstrong) circulated through camp, calling the officers to meet the next day to answer “a country that tramples upon your rights, disdains your cries, and insults your distress.” The announcement suggested that the army should, under Washington’s leadership, defy Congress and launch a military coup. At this moment the Revolution could have spun out of control, ending in tyranny. Resistant to the allure of power, Washington determined to quell the incipient uprising.

Recognizing that the army’s patience had worn thin and that its grievances were legitimate, Washington knew he could neither cancel the meeting nor allow it to take place. Instead he shrewdly called his own substitute gathering on March 15, hoping somehow to mollify the men and avert a coup. He would meet his disgruntled officers in person, face-to-face, either to stand them down or be deposed.

On the fifteenth, a “visibly agitat- ed” Washington (according to an eye witness) spoke to a tense, restive audience in an over-crowded assembly hall known as “The Temple of Virtue.” He begged the officers not to take a step that would bury their reputations in infa- my. “My God,” he asked, what evil could the author of the anonymous address have been up to? “Can he be a friend to the Country? Rather is he not an insidious foe,” perhaps even an enemy agent “sowing the seeds of discord & seperation between the Civil and Military power of the Continent?”

Despite an eloquent and impassioned speech, Washington’s arguments for forbearance fell on deaf ears. As hostile murmurs welled up in the audience, he miraculously subdued the malcontents with a dramatic gesture: Washington pulled out his glasses. No one had ever seen him wear them in public before. Donning them, he remarked, “Gentlemen, you must excuse me. Not only have I gone gray, but I have also grown blind in the service of my country.” That poignant moment, that admission of weakness, that selfless dedication to duty, shattered the mutiny and left the officers in tears. After Washington left the room, the assemblage unanimously rejected a military coup in favor of peaceful negotiations with Congress. The new nation had survived its brush with despotism.

Indeed, the American Revolution is unusual among modern world revolutions because it did not end in a dictatorship, like the French, Russian, and Chinese Revolutions. That the new nation instead end- ed up a republic had a lot to do with Washington’s careful use of power. Once the war was over and independence won, his job complete, Washington resigned as Commander in Chief and retired back to his Mount Vernon plantation. The irony is that by never abusing power, and by giving it back to people, he became more and more powerful. Washington won the trust of his countrymen, who repeatedly called for his services, not only as Commander in Chief, but also as president of the 1787 Constitutional Convention, and finally as President of the U.S. for two terms, from 1789 to 1797. On four separate occasions the American people or their rep- resentatives thus unanimously elected Washington to lead them.

Washington’s contemporaries well understood his virtue. Consider the statue sculpted by the eighteenth-century French artist Jean Antoine Houdon. Instead of depicting one of Washington’s military victories, the statue shows Washington retiring from the army, hanging up his military cloak and sword, and going back to his plow. Similarly, artist John Trumbull’s painting that hangs in the U.S. Capitol rotunda shows Washington resigning his military commission back to Congress and becoming an ordinary citizen again.

Washington always did the virtuous thing because he wanted “secular immortality.” Some men seek spiritual immortality—everlasting life in heaven. But Washington wanted a different type of immortality. He wanted to live forever in the pages of history books, and in the hearts and minds of the American people. He wanted to be a leader unlike any other in modern world history—greatest of them all. To do that, he had to walk away from power, unlike other leaders.

Washington kept answering the call of his country because he became the only one who could. Not until the nation gained maturity could another leader hold it together. As Thomas Jefferson admonished him, “North and South will only hang together if they have you to hang onto.” By accepting two terms as President, Washington put his cherished reputation at stake. Had he died in office (his greatest fear was dying in office) he would have died holding power instead of giving it up, and his prized reputation would have been shot. Not until he retired for good did he secure his secular immortality once and for all. Without an “Indispensable Man” like Washington, the American experiment in republican government could never have succeeded, or become a model and inspiration to the world.

Defining Civic Virtues: Self-Governance
To be self-controlled, avoiding extremes, and to not be excessively influenced or controlled by others.