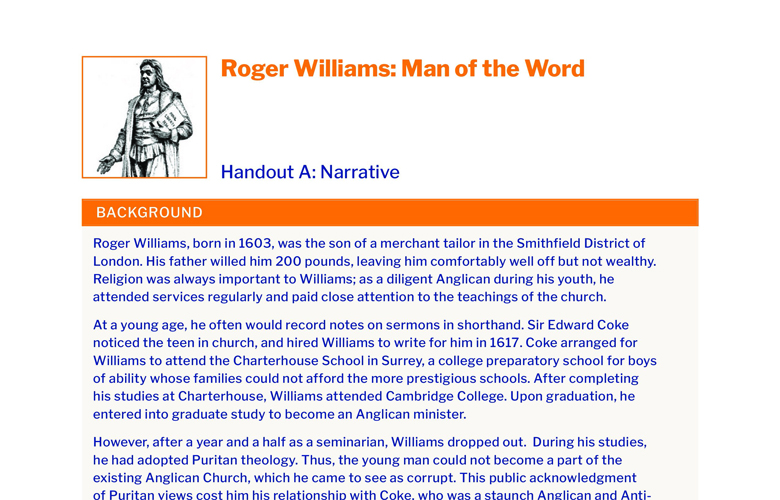 Roger Williams, born in 1603, was the son of a merchant tailor in the Smithfield District of London. His father willed him 200 pounds, leaving him comfortably well off but not wealthy. Religion was always important to Williams; as a diligent Anglican during his youth, he attended services regularly and paid close attention to the teachings of the church.

At a young age, he often would record notes on sermons in shorthand. Sir Edward Coke noticed the teen in church, and hired Williams to write for him in 1617. Coke arranged for Williams to attend the Charterhouse School in Surrey, a college preparatory school for boys of ability whose families could not afford the more prestigious schools. After completing his studies at Charterhouse, Williams attended Cambridge College. Upon graduation, he entered into graduate study to become an Anglican minister.

However, after a year and a half as a seminarian, Williams dropped out. During his studies, he had adopted Puritan theology. Thus, the young man could not become a part of the existing Anglican Church, which he came to see as corrupt. This public acknowledgment of Puritan views cost him his relationship with Coke, who was a staunch Anglican and AntiPuritan. Coke had become almost a second father to Williams, so this loss cost him his biggest emotional and financial supporter.

It certainly would have been easy for Williams to keep his Puritan views to himself and work for change from inside the Anglican Church, preserving the respect and support of Coke that meant so much to him. Above all else, however, Williams was loyal to the Word of God, and he chose to become a Puritan no matter the consequences. This would become the defining point of his identity. He left his old life behind and became a Puritan chaplain to a wealthy family in Essex. Williams soon became a “Separatist,” a Puritan who believed the Church of England was so corrupt that the only just course was to break away completely.

An open and honest man concerning his beliefs, Williams had no fear of man when convinced of the truth in his spiritual beliefs. He wrote and spoke of them clearly in his book, The Bloudy Tenet of Persecution, where he stated, “It hath been England’s sinfull shame to fashion and change their garments and religions with wondrous ease and lightnese, as a higher power, a stronger sword hath prevailed.”

Williams eventually moved to the American colonies to serve as a minister and escape religious persecution. His singular focus was to live according to his interpretation of God’s will, a task he built his identity around. He is best known for the founding of Providence, which would eventually become Rhode Island. The colony was known for religious tolerance and a strong wall of separation between church and state.

Although Williams had strong religious beliefs, his Christianity never allowed him to forget his own fallibility; he was a man of tolerance. His acknowledgment of his own flawed humanity made him willing to listen to others and their needs, and he never dismissed the possibility that he could have gotten something wrong. Williams’ struggle to protect religious freedom was not born out of any uncertainty in the truths he believed, but in his conviction that all persons must be free to worship God according to the dictates of their conscience.

Puritanism was a controversial belief to hold in England in the 1620s, a time when the Anglican Church wielded enormous power. Roger Williams faced harassment and persecution from church officials after he adopted his Puritan beliefs. He was among the reformers who believed that the Church of England was excessively ritualistic and ornamental, due to remnants of its Roman Catholic origins. Puritan Separatists like Williams wanted to simplify church services and recover what they considered a more biblical, purer Christianity. They believed that England’s church was too corrupt to even try to reform.

In the fall of 1630, Roger Williams and his wife, Mary, decided to flee to America in order to have greater religious liberty and establish a new church in Massachusetts. They boarded the ship, Lyon, arriving in Boston on February 5, 1631. Upon his arrival, Williams was offered a position as an assistant minister at a Puritan church in the city. However, Williams refused the post. He did not believe the church had adequately separated from Anglicanism and refused to compromise on the beliefs that he had forged his identity around. Massachusetts leaders branded Williams a radical as many of the colonials were wary of a complete separation from the Anglican Church.

Williams went on to take a position as an assistant pastor at a church in nearby Plymouth, where he served until 1633. While there, he developed another controversial view—that colonists should attempt to convert Native Americans to Christianity peacefully. Williams believed the conversions should be carried out with respect and reason, not violent coercion. He saw support for this belief in scripture. As he wrote in The Bloudy Tenent of Persecution, “It becomes not the spirit of the Gospel to convert Aliens to the Faith (such as the Samarians and the unconverted Christians in Crete) with fire and brimstone.”

In 1633, Williams moved to Salem, Massachusetts, becoming a minister at a church in 1634. While in Salem, his views continued to evolve. He started calling for a separation of church and state, believing that mixing the two was corrupting to both church and civil authority. He outlined this principle in his writing, stating, “An inforced uniformity of religion throughout a nation of civill state, confounds the Civill and Religious, denies the principles of Christianity and civility . . .” Williams believed that civil authorities should not have the power to punish violations of the Ten Commandments because the government should not interfere with church matters.

He also spoke out against the king’s right to own and grant land in the New World, arguing the only just way to gain land was to buy it from the Native Americans. This belief made the colonial leaders especially nervous, as they feared retribution from the Crown that could lead to the loss of their patent on the colony. Williams additionally undermined authority by speaking out against the requirement that individuals swear an oath to the Commonwealth. He believed an oath was an act of worship and should not be used in non-sacred ways.

The fiery Separatist continued to preach the word of God as he saw it, even as he realized powerful forces were beginning to move against him. To do otherwise would violate the principles that he had formed his identity around. In October 1635, Roger Williams was officially banished from Massachusetts for his views. He originally planned to live with and preach to the local Native Americans, but when eight families asked to join him, he decided to found a settlement. Williams left Salem in the brutally cold winter weather of January 1636 to avoid being deported to England. Thirty-two like-minded companions joined Williams for the journey, and the group stayed in a Native American settlement for the winter.

Williams lived out his principles and bought land from the Narragansett people for his new
settlement, which he named Providence. He had traded and shared his religious beliefs with
the Native Americans, earning their respect in the years since his arrival in New England.
Williams said Providence was purchased “by love,” as the chiefs would not have sold it to
anyone else at any price.

He was determined to shape the new colony, which would grow into Rhode Island, according
to his religious beliefs. Unlike Massachusetts, there would never be an established church.
Religious liberty and freedom of conscience would exist for people of any faith. He would
even welcome those whose beliefs he did not see as legitimate, such as Quakers, Jews, and
Catholics. The authorities of the colony would have power only when it came to civil issues
such as roads. This was a truly significant and unique achievement, as this kind of tolerance
simply did not exist at that time. He was never afraid of change regardless of how shocking it
could be to the established order.

In 1638, Williams became convinced of a new truth in scripture and became a Baptist (a Christian denomination that focused on conversion and adult baptism). Along with others,
he founded the first Baptist Church in the United States in Providence in 1639. However, he
left that church within a year, as he felt he could not belong to a church without any proof of succession from Christ’s original apostles. Williams’ spiritual journey would see him eventually become a “Seeker.” The Seekers denied that there was any “true” church and urged people to worship alone, seeing faith as a personal matter.

Roger Williams’ life itself was a spiritual journey, dedicated to living out the Word of God as he understood it. This principle became a core aspect of his identity, and he followed where he thought it led regardless of the personal consequences. His vision of separation of church and state and real freedom of conscience were principles that became the spiritual framework of the founding of the United States of America.