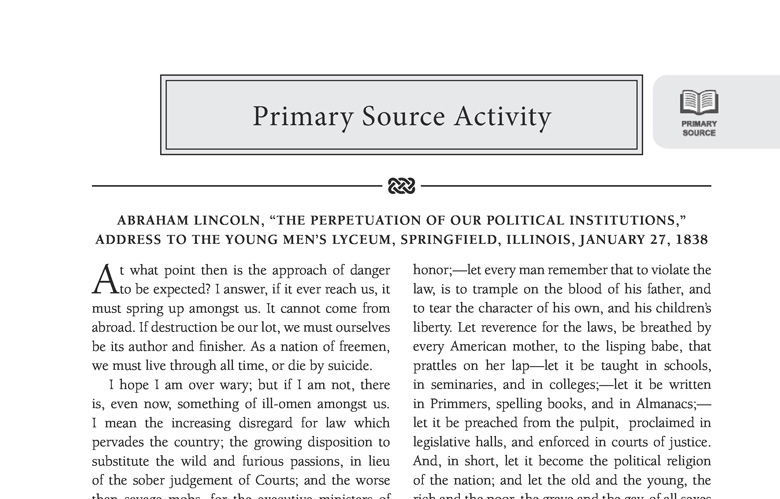 ABRAHAM LINCOLN, “THE PERPETUATION OF OUR POLITICAL INSTITUTIONS,” ADDRESS TO THE YOUNG MEN’S LYCEUM, SPRINGFIELD, ILLINOIS, JANUARY 27, 1838
At what point then is the approach of danger to be expected? I answer, if it ever reach us, it must spring up amongst us. It cannot come from abroad. If destruction be our lot, we must ourselves be its author and finisher. As a nation of freemen, we must live through all time, or die by suicide.

I hope I am over wary; but if I am not, there is, even now, something of ill-omen amongst us. I mean the increasing disregard for law which pervades the country; the growing disposition to substitute the wild and furious passions, in lieu of the sober judgement of Courts; and the worse than savage mobs, for the executive ministers of justice. This disposition is awfully fearful in any community; and that it now exists in ours, though grating to our feelings to admit, it would be a violation of truth, and an insult to our intelligence, to deny. Accounts of outrages committed by mobs, form the every-day news of the times….
Such are the effects of mob law; and such are the scenes, becoming more and more frequent in this land so lately famed for love of law and order; and the stories of which, have even now grown too familiar….

The question recurs “how shall we fortify against it?” The answer is simple. Let every American, every lover of liberty, every well wisher to his posterity, swear by the blood of the Revolution, never to violate in the least particular, the laws of the country; and never to tolerate their violation by others. As the patriots of seventy-six did to the support of the Declaration of Independence, so to the support of the Constitution and Laws, let every American pledge his life, his property, and his sacred honor;—let every man remember that to violate the law, is to trample on the blood of his father, and to tear the character of his own, and his children’s liberty. Let reverence for the laws, be breathed by every American mother, to the lisping babe, that prattles on her lap—let it be taught in schools, in seminaries, and in colleges;—let it be written in Primmers, spelling books, and in Almanacs;— let it be preached from the pulpit, proclaimed in legislative halls, and enforced in courts of justice. And, in short, let it become the political religion of the nation; and let the old and the young, the rich and the poor, the grave and the gay, of all sexes and tongues, and colors and conditions, sacrifice unceasingly upon its altars.

While ever a state of feeling, such as this, shall universally, or even, very generally prevail throughout the nation, vain will be every effort, and fruitless every attempt, to subvert our national freedom.

When I so pressingly urge a strict observance of all the laws, let me not be understood as saying there are no bad laws, nor that grievances may not arise, for the redress of which, no legal provisions have been made. I mean to say no such thing. But I do mean to say, that, although bad laws, if they exist, should be repealed as soon as possible, still while they continue in force, for the sake of example, they should be religiously observed….

There is no grievance that is a fit object of redress by mob law. In any case that arises, as for instance, the promulgation of abolitionism, one of two positions is necessarily true; that is, the thing is right within itself, and therefore deserves the protection of all law and all good citizens; or, it is wrong, and therefore proper to be prohibited by legal enactments; and in neither case, is the interposition of mob law, either necessary, justifiable, or excusable.

But, it may be asked, why suppose danger to our political institutions? Have we not preserved them for more than fifty years? And why may we not for fifty times as long?….

They were the pillars of the temple of liberty; and now, that they have crumbled away, that temple must fall, unless we, their descendants, supply their places with other pillars, hewn from the solid quarry of sober reason. Passion has helped us; but can do so no more. It will in future be our enemy. Reason, cold, calculating, unimpassioned reason, must furnish all the materials for our future support and defence. Let those materials be moulded into general intelligence, sound morality and, in particular, a reverence for the constitution and laws; and, that we improved to the last; that we remained free to the last; that we revered his name to the last; that, during his long sleep, we permitted no hostile foot to pass over or desecrate his resting place; shall be that which to learn the last trump shall awaken our WASHINGTON.

Upon these let the proud fabric of freedom rest, as the rock of its basis; and as truly as has been said of the only greater institution,” the gates of hell shall not prevail against it.”

DR. MARTIN LUTHER KING, JR.,
LETTER FROM BIRMINGHAM JAIL, APRIL 16, 1963
You express a great deal of anxiety over our willingness to break laws. This is certainly a legitimate concern. Since we so diligently urge people to obey the Supreme Court’s decision of 1954 outlawing segregation in the public schools, at first glance it may seem rather strange and paradoxical to find us consciously breaking laws. One may well ask: “How can you advocate breaking some laws and obeying others?” The answer lies in the fact that there are two types of laws: just and unjust. One has not only a legal but a moral responsibility to obey just laws. Conversely, one has a moral responsibility to disobey unjust laws. I would agree with St. Augustine that “an unjust law is no law at all.”

Now, what is the difference between the two? How does one determine whether a law is just or unjust? A just law is a man-made code that squares with the moral law or the law of God. An unjust law is a code that is out of harmony with the moral law. To put it in the terms of St. Thomas Aquinas: An unjust law is a human law that is not rooted in eternal law and natural law. Any law that uplifts human personality is just. Any law that degrades human personality is unjust. All segregation statutes are unjust because segregation distort the soul and damages the personality. It gives the segregator a false sense of superiority and the segregated a false sense of inferiority. Segregation, to use the terminology of the Jewish philosopher Martin Buber, substitutes an “I-it” relationship for an “I-thou” relationship and ends up relegating persons to the status of things. So segregation is not only politically, economically and sociologically unsound, it is morally wrong and sinful. Paul Tillich said that sin is separation. Is not segregation an existential expression of man’s tragic separation, his awful estrangement, his terrible sinfulness? Thus it is that I can urge men to obey the 1954 decision of the Supreme Court, for it is morally right; and I can urge them to disobey segregation ordinances, for they are morally wrong.

Let us consider a more concrete example of just and unjust laws. An unjust law is a code that a numerical or power majority group compels a minority group to obey but does not make binding on itself. This is difference made legal. On the other hand, a just law is a code that a majority compels a minority to follow and that it is willing to follow itself. This is sameness made legal.

Let me give another explanation. An unjust law is a code inflicted on a minority that, as a result of being denied the right to vote, had no part in enacting or devising the law. Who can say that the legislature of Alabama which set up that state’s segregation laws was democratically elected? Throughout Alabama all types of devious methods are used to prevent Negroes from becoming registered voters, and there are some counties in which, even though Negroes constitute a majority of the population, not a single Negro is registered. Can any law enacted under such circumstances be considered democratically structured?

Sometimes a law is just on its face and unjust in its application. For instance, I was arrested Friday on a charge of parading without a permit. Now, there is nothing wrong in having an ordinance which requires a permit for a parade. But such an ordinance becomes unjust when it is used to maintain segregation and to deny citizens the First Amendment privilege of peaceful assembly and protest.

I hope you are able to see the distinction I am trying to point out. In no sense do I advocate evading or defying the law, as would the rabid segregationist. That would lead to anarchy. One who breaks an unjust law must do so openly, lovingly, and with a willingness to accept the penalty. I submit that an individual who breaks a law that conscience tells him is unjust and who willingly accepts the penalty of imprisonment in order to arouse the conscience of the community over its injustice, is in reality expressing the highest respect for law.