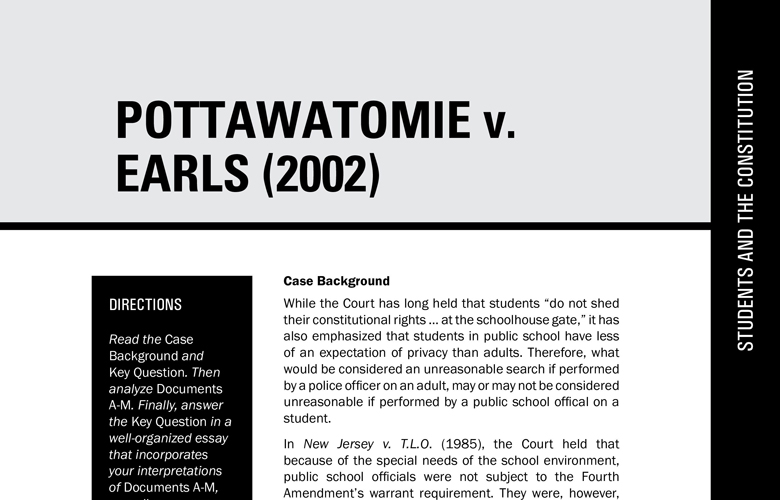 STUDENTS AND THE CONSTITUTION

While the Court has long held that students “do not shed their constitutional rights … at the schoolhouse gate,” it has also emphasized that students in public school have less of an expectation of privacy than adults. Therefore, what would be considered an unreasonable search if performed by a police officer on an adult, may or may not be considered unreasonable if performed by a public school offical on a student.

In New Jersey v. T.L.O. (1985), the Court held that because of the special needs of the school  environment, public school officials were not subject to the Fourth Amendment’s warrant requirement. They were, however, bound by the amendment’s requirement that searches be “reasonable.”

In Skinner v. Railway Labor Executives Association (1989), the Court held that drug tests were “searches” subject to Fourth Amendment considerations. The Court was asked to consider the constitutionality of random drug-testing of student athletes in Vernonia School District v. Acton (1995). Citing the diminished expectation of privacy of student athletes, along with the danger of serious injuries when competitors were on drugs, the Court upheld the policy as reasonable.

When the Board of Education of Pottawatomie instituted a policy requiring random drug tests of all students involved in any extra-curricular activity, Lindsay Earls and two other students challenged the policy as unconstitutional.