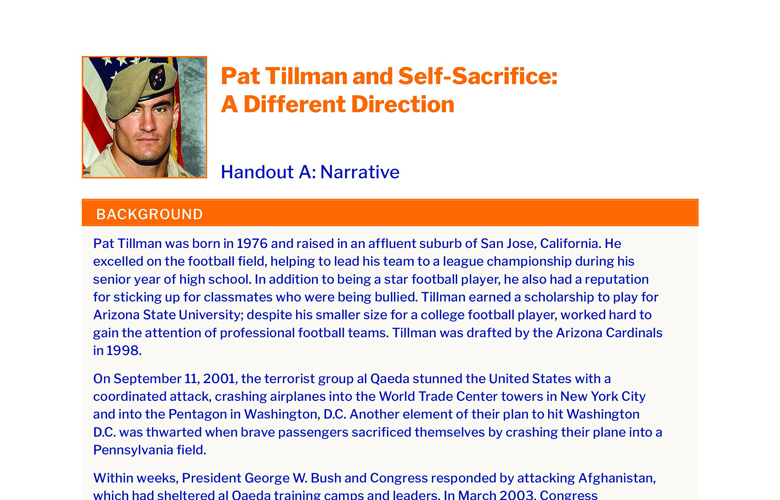 Pat Tillman was born in 1976 and raised in an affluent suburb of San Jose, California. He excelled on the football field, helping to lead his team to a league championship during his senior year of high school. In addition to being a star football player, he also had a reputation for sticking up for classmates who were being bullied. Tillman earned a scholarship to play for Arizona State University; despite his smaller size for a college football player, worked hard to gain the attention of professional football teams. Tillman was drafted by the Arizona Cardinals in 1998.

On September 11, 2001, the terrorist group al Qaeda stunned the United States with a coordinated attack, crashing airplanes into the World Trade Center towers in New York City and into the Pentagon in Washington, D.C. Another element of their plan to hit Washington D.C. was thwarted when brave passengers sacrificed themselves by crashing their plane into a Pennsylvania field.

Within weeks, President George W. Bush and Congress responded by attacking Afghanistan, which had sheltered al Qaeda training camps and leaders. In March 2003, Congress authorized the Bush administration to take the war on terror to Iraq because of the belief that the Middle Eastern nation possessed Weapons of Mass Destruction (WMDs) that might be sold to terrorists and threaten the lives of Americans.

In the spring of 2001, Pat Tillman was enjoying life and a string of great successes. Tillman was the starting strong safety for the National Football League’s Arizona Cardinals and was winning great accolades for his hard-hitting style of play. He may not have been a household name or the NFL’s biggest superstar, but he had been named the best strong safety of 2000 by a Sports Illustrated ranking.

Other teams started to notice his excellence on the playing field and on April 13, 2001, the St. Louis Rams offered Tillman an impressive contract of $9.6 million for five years with $2.6 million paid up front. For a player that made the league minimum of $361,000, it was the offer of a lifetime that would give him financial security and vindicate his hard work and excellent play. He turned it down without giving it much thought, however. He answered his agent’s incredulous response by asserting the importance of loyalty to the Cardinals, stating, “They believed in me. I love the coaches here. I can’t bring myself to take an offer from the Rams.” His agent explained, “That’s unheard of. You just  don’t see loyalty like that in sports today. Pat Tillman was special. He was a man of principle.”

On September 11, 2001, Tillman was sleeping in because it was his day off from practice. His phone started ringing and jarred him awake around 10:00 a.m. Rubbing the sleep from his eyes, he answered the phone to hear his brother, Kevin, frantically telling him to turn on the television. When he did so, he was horrified to see video clips of a jetliner crashing into the World Trade Center and footage of one of the buildings collapsing with unknown thousands trapped inside. Only twenty minutes later, the second tower crumbled to the ground as well.

After the initial shock had passed, he gave an interview to the press through the football team’s public relations office. He said, “Times like this you stop and think about just how — not only how good we have it, but what kind of a system we live under. What freedoms we’re allowed. And that wasn’t built overnight. And the flag’s a symbol of all that . . . My great-grandfather was at Pearl Harbor. And a lot of my family has . . . gone and fought in wars. And I really haven’t done a . . . thing as far as laying myself on the line like that. So I have a great deal of respect for those who have.”

Tillman had another good year playing on the gridiron despite the tumultuous world events and the start of the War on Terror. In April 2002, the Cardinals finally realized that they would need to pay Tillman what he was worth. The Cardinals offered him $3.6 million over three years but Tillman again turned the large offer down−this time for a different reason.

As the football season wound down, Tillman began speaking with his brother about joining the U.S. Army. He also spoke at length with a family friend who was a former member of the elite U.S. Marines Force Recon. Tillman and his friend went rock-climbing together and spoke for hours about the commitment and what to expect signing up for some of the elite fighting forces in the American military. Finally, Tillman made his decision. He would leave professional football at the peak of his career and highest market value as a player to enlist in the U.S. Army for a base salary of $1,290 per month as he pursued becoming an airborne Ranger.

Tillman never gave a media interview about his decision because he didn’t want to be accused of grandstanding and trying to win praise for his sacrifice. However, he confided to his computer diary, writing, “I’m not sure where this new direction will take my life though I am positive it will include its share of sacrifice and difficulty . . . Despite this, however, I am equally positive that this new direction will, in the end, make our lives fuller, richer, and more meaningful. My voice is calling me in a different direction. It is up to me whether or not to listen.”

Tillman certainly listened to his conscience. He gave up the prestige of being a well-known professional athlete, the comforts of being home with his wife, a lavish lifestyle, and financial security. The twenty-six-year-old patriot decided to sacrifice all of these to serve his country and dedicate himself to something he considered more important than material pleasures.

Tillman completed basic training that summer and went to Airborne school in the fall. He was deployed to Iraq during the 2003 invasion and completed some important missions before being assigned to patrol Baghdad once Iraq’s capital was taken. Technically, he might have been eligible to be released from his three-year military service commitment to return to the NFL. He had several teams who wanted to offer him large contracts to return, but Tillman stuck fast to his duty and turned them down yet again.

In April 2004, Tillman landed in Afghanistan for his second deployment. For three weeks, his platoon patrolled in a Humvee and on foot, but did not find the enemy. On April 22, his platoon was traveling to a village to clear out enemy fighters when one of the vehicles in the convoy broke down. After discussing with headquarters on the radio on how to proceed, the convoy finally continued with the help of locals while twilight was approaching. They traveled along a riverbed in a valley when suddenly they were hit by mortar fire from an unseen enemy. Tillman and some rangers fanned out to return fire behind some boulders. As the two sides exchanged fire for about thirty minutes in an increasingly confused situation, Tillman was killed by friendly fire despite warnings to his fellow Rangers that he was an American.

Although all Americans who were deployed to fight the wars in Iraq and Afghanistan made many sacrifices, Tillman is particularly an exemplar of self-sacrifice. He consistently gave up the allure of personal gain for both the good of his team and his nation. He gave his life in a tragic event fighting for his fellow Americans.