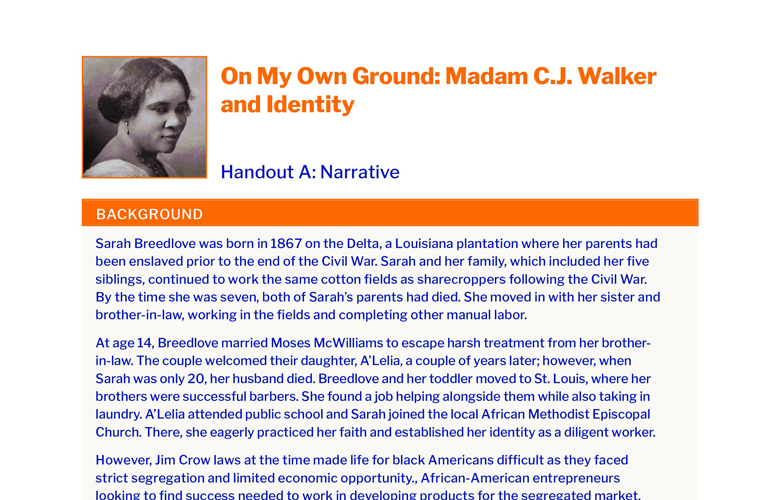 Sarah Breedlove was born in 1867 on the Delta, a Louisiana plantation where her parents had been enslaved prior to the end of the Civil War. Sarah and her family, which included her five siblings, continued to work the same cotton fields as sharecroppers following the Civil War. By the time she was seven, both of Sarah’s parents had died. She moved in with her sister and brother-in-law, working in the fields and completing other manual labor.

At age 14, Breedlove married Moses McWilliams to escape harsh treatment from her brother-in-law. The couple welcomed their daughter, A’Lelia, a couple of years later; however, when Sarah was only 20, her husband died. Breedlove and her toddler moved to St. Louis, where her brothers were successful barbers. She found a job helping alongside them while also taking in laundry. A’Lelia attended public school and Sarah joined the local African Methodist Episcopal Church. There, she eagerly practiced her faith and established her identity as a diligent worker.

However, Jim Crow laws at the time made life for black Americans difficult as they faced strict segregation and limited economic opportunity., African-American entrepreneurs looking to find success needed to work in developing products for the segregated market. When Breedlove began to suffer from a scalp malady that caused her to lose her hair, she tried various commercial preparations, including those made by Annie Malone, a black entrepreneur. Breedlove eventually moved to Denver, where she became a sales agent for Malone’s products. There, she provided in-home demonstrations and sold shampoos, lotions, and creams door-to-door.

Breedlove experimented with her own homemade hair conditioners while working for Malone. She later explained that in a dream, she saw a man who showed her a recipe that included petrolatum, medicinal sulfur, and certain ingredients from Africa—a preparation similar to Malone’s. Breedlove soon married Charles Joseph Walker, a newspaperman, and began to market her own new hair and beauty products as Madam C.J. Walker’s System. The flagship product was Madam C.J. Walker’s Wonderful Hair Grower. Breedlove (now Walker) used her own before-and after pictures in advertising and on the decorative tins in which she packed her pomades and other beauty supplies. The innovative marketing, coupled with Sarah’s indefatigable work ethic, made her business very successful.

Most homes at the time lacked indoor plumbing and electricity and most soaps and cleaning products were based on lye. Walker advised her clients to aim for “cleanliness and loveliness” by giving more attention to their grooming. While visiting clients in their home, she gave tips on how they could improve sanitation. She was careful to distinguish her products from the hair straighteners advocated by white cosmetic firms, stating, “Right here let me correct the erroneous impression held by some that I claim to straighten the hair. I deplore such impression because I have always held myself out as a hair culturist. I grow hair . . . I want the great masses of my people to take a greater pride in their personal appearance and to give their hair proper attention.” Madam Walker’s clients became her salespeople because of a generous commission system and demand for the products grew rapidly. She was part of a larger movement in America as between 10,000 and 40,000 black−owned businesses were started from 1883 to 1913.

Walker established her business headquarters in Denver and opened a branch in Pittsburgh managed by her daughter, A’Lelia. Walker provided lectures and demonstrations in homes, churches, and club meetings across the country, winning thousands of customers. In Pittsburgh and later in Indianapolis, she maintained beauty schools alongside her factories, where she
taught her agents the Walker System. Walker encouraged self-respect and inspired a strong sense of identity by personal example, cultivating black female business talent and training women as “hair culturists” to sell and demonstrate her products in house calls.

Culturists were trained in strict rules of cleanliness, grooming, and professionalism, wearing
crisp white shirtwaists tucked into elegant long black skirts, and carrying black satchels with all the equipment needed to help clients achieve the hair styles they desired. Her 1915 manual, Hints to Agents, exhorted, “Open your windows — air it well … Keep your teeth clean in order that [your] breath might be sweet … See that your fingernails are kept clean, as that is a mark of refinement.” Walker’s company trained some 40,000 “Walker Agents” in the expanding number of beauty colleges that she built or paired with already-established black institutions. “I am not merely satisfied in making money for myself. I am endeavoring to provide employment for hundreds of women of my race,” she explained.

Madam Walker was more than an entrepreneur. She sought to empower black women throughout the country, leading to open criticism from both white and African-American men. As generous as she was diligent, she established a network of Walker clubs which offered bonuses and prizes to the local organizations that contributed the most to their communities through charitable works. A fervent proponent of black self-help, she funded scholarships for women at Tuskegee Institute and donated large sums to such organizations as the YMCA, NAACP, and African-American colleges and charities.

Walker also used her vast network to counteract social injustice and racial violence. She built an elegant home in New York in 1916 and got involved in Harlem’s social and political life by becoming a major donor to a Harlem anti-lynching fund. In July 1917, white mobs, agitated due to labor-related tensions, set fire to black neighborhoods and murdered dozens of African Americans in East St. Louis, Illinois. As many as 6000 blacks were left homeless.

In Philadelphia that year, Walker hosted one of the first national conventions for American businesswomen. She told her network gathered there, “This is the greatest country under the sun, but we must not let our love of country, our patriotic loyalty, cause us to abate one whit in our protest against wrong and injustice. We should protest until the American sense of justice is so aroused that such affairs as the East St. Louis riot be forever impossible.”

Walker’s doctor warned her that she needed to slow down, but she was unable to do so. There was so much that she wanted to accomplish and her identity was wrapped up in constant efforts to make life better for blacks—especially black women—in America. In 1919, at the age of 51, Sarah Breedlove—Madam C.J. Walker—died of hypertension and kidney failure. She was the first black American woman to become a self-made millionaire. At the time of her death, she was the sole owner of her business, which was valued at more than $1 million. She also had a personal fortune estimated to be between $600,000 and $700,000. In 1912, Walker described her life: “I am a woman who came from the cotton fields of the South. From there I was promoted to the washtub. From there I was promoted to the cook kitchen. And from there I promoted myself into the business of manufacturing hair goods and preparations . . . I have built my own factory on my own ground.” She did not let racism stop her from achieving the goals that she built her identity around.