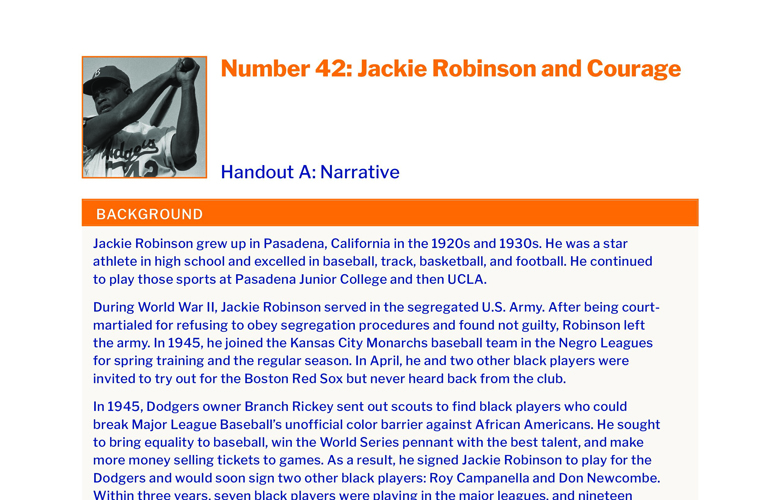 Jackie Robinson grew up in Pasadena, California in the 1920s and 1930s. He was a star athlete in high school and excelled in baseball, track, basketball, and football. He continued to play those sports at Pasadena Junior College and then UCLA.

During World War II, Jackie Robinson served in the segregated U.S. Army. After being courtmartialed for refusing to obey segregation procedures and found not guilty, Robinson left the army. In 1945, he joined the Kansas City Monarchs baseball team in the Negro Leagues for spring training and the regular season. In April, he and two other black players were invited to try out for the Boston Red Sox but never heard back from the club.

In 1945, Dodgers owner Branch Rickey sent out scouts to find black players who could break Major League Baseball’s unofficial color barrier against African Americans. He sought to bring equality to baseball, win the World Series pennant with the best talent, and make more money selling tickets to games. As a result, he signed Jackie Robinson to play for the Dodgers and would soon sign two other black players: Roy Campanella and Don Newcombe. Within three years, seven black players were playing in the major leagues, and nineteen played in the minor leagues, hoping one day to play in the majors.

Jackie Robinson needed incredible amounts of courage to withstand the racial taunts, being thrown at by pitchers, or hit in the legs with spikes by baserunners without fighting back. He endured and succeeded brilliantly, winning countless awards, making the Hall of Fame, having the number 42 retired forever from all of baseball, and helping to integrate baseball and other major sports. Breaking the color barrier had important larger implications for equality throughout society and starting the Civil Rights Movement.

On August 28, 1945, the African-American baseball player Jackie Robinson walked into a dark office in Brooklyn, New York that featured a portrait of Abraham Lincoln on the wall. It was the most important meeting of his life. Behind a large mahogany desk sat the owner of the Brooklyn Dodgers, Branch Rickey. He wore a jacket and bow tie, and, after welcoming Robinson, sat impassively smoking a cigar while assessing him. Rickey offered Robinson a “chance with the Brooklyn Dodgers” after a stint with the club’s minor league team. Robinson was “thrilled, scared, and excited” all at once. He was incredulous and speechless for a few quiet minutes as he processed the opportunity. When Rickey asked him if he could do it, Robinson finally replied, “Yes.” Robinson may have been surprised by Rickey’s next words. “I know you’re a good ball player. What I don’t know is whether you have the guts.”

Rickey did not question the physical courage of the athletic superstar and ex-serviceman standing before him, but he wanted to know if Robinson had the moral courage to break baseball’s color barrier and endure the inevitable racial abuse that he would face. “I’m looking for a ball player with guts enough not to fight back,” Rickey explained. The owner went through a variety of scenarios from segregated hotels and restaurants to angry fans to opposing players hurling racial slurs or trying to hurt him using their spikes. Robinson agreed to turn the other cheek and never react. Since both were impressed by the other and agreed to the terms, Robinson signed the contract to become the first black player to play baseball in the major leagues.

When Robinson attempted to travel with his bride to reach spring training for the Dodgers’ minor league club the following year, he experienced the first of many tests of his moral courage. First, they were bumped from flights due to their color and would eventually have to ride in a segregated bus to reach the team in Daytona Beach, Florida. Moreover, he had to stay at a private home away from his white teammates, who stayed at an ocean-front hotel. In addition, once the regular season started, he was thrown at by opposing pitchers and purposefully hit by spikes as expected. Games were even canceled when opposing players refused to play against him or cities shut down stadiums. Just as he had promised Rickey, Robinson endured the abuse and did not respond. “Mr. Rickey had made it clear that, for the success of our venture, we would have to bear indignities and humiliations without complaint,” Robinson explained. In fact, the two compared it to bearing “the cross of martyrdom.”

Still, Robinson would need to muster his courage to face the stinging barbs of racism as he climbed his way to a spot on the major league Brooklyn Dodgers team. The ugly racial taunts from fans and opposing players continued through his minor league season. Robinson almost had a breakdown a couple of times and confided to his manager in private that, “Nobody knows what I’m going through.” Despite the torrent of abuse, Robinson won the league batting crown and set a team record with a .349 batting average in addition to leading the league in runs scored and fielding percentage. His greatest moment that season came when his team won the league championship, and he was carried triumphantly on the shoulders of fans.

Robinson’s success in the minor leagues may have earned him a spot on the Brooklyn Dodgers during the 1947 season, but breaking the color barrier for major league baseball would be the greatest test of Robinson’s courage. Several members of the team staged a revolt and petitioned Rickey to keep Robinson off the team. The team’s owner only responded by laying down the law: “I will decide on who is on [the team] and [manager Leo] Durocher will decide who of those who are on it does the playing.”

On April 15, 1947, opening day found thousands of African Americans and others at the ballpark at Ebbets Field to cheer on Robinson and the Dodgers. The New York crowds were generally supportive and his teammates professional, but a week later, the visiting Philadelphia Phillies manager, Ben Chapman, and his players screamed horrifying racial taunts at Robinson and made threatening gestures. Robinson barely kept his cool and was greatly encouraged when his teammates defended him against the insults. When the Dodgers went on road trips that spring, he suffered the indignity of racial slurs and sleeping apart from his team in a different hotel. He was hit by more pitches by the end of May than any player the entire previous season, and baserunners continued to aim their spikes at the legs of the black first baseman. The president of the National League even had to warn several players that if they refused to play in a game with Robinson, they would be suspended. “This is the United States of America,” he said, “and one citizen has as much right to play as another.”

Although the incidents continued throughout the season, Robinson’s courage had won the day Teammates, opposing players, and fans began to judge Jackie Robinson more on his skills as a baseball player than the color of his skin. Though he received more than 300,000 votes for the All-Star team, that was not enough for him to be named to the team. On September 23, Rickey honored Robinson with a “Jackie Robinson Day” at Ebbets Field. He received a variety of large gifts including a new Cadillac. Robinson led the Dodgers in several categories of statistics and earned Rookie of the Year honors. He helped lead the team into the World Series against the New York Yankees. Robinson’s moral and physical courage in the face of adversity had made his dream come true and paved the way for others to achieve equality through sports.