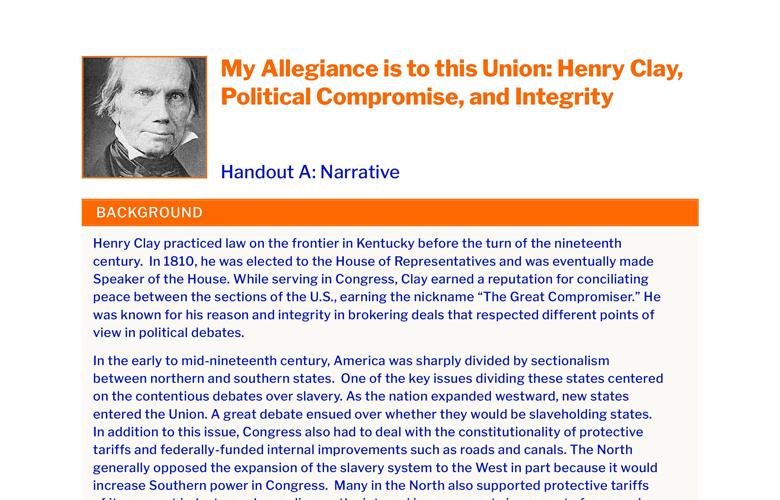 Henry Clay practiced law on the frontier in Kentucky before the turn of the nineteenth century. In 1810, he was elected to the House of Representatives and was eventually made Speaker of the House. While serving in Congress, Clay earned a reputation for conciliating peace between the sections of the U.S., earning the nickname “The Great Compromiser.” He was known for his reason and integrity in brokering deals that respected different points of view in political debates.

In the early to mid-nineteenth century, America was sharply divided by sectionalism between northern and southern states. One of the key issues dividing these states centered on the contentious debates over slavery. As the nation expanded westward, new states entered the Union. A great debate ensued over whether they would be slaveholding states. In addition to this issue, Congress also had to deal with the constitutionality of protective tariffs and federally-funded internal improvements such as roads and canals. The North generally opposed the expansion of the slavery system to the West in part because it would increase Southern power in Congress. Many in the North also supported protective tariffs of its nascent industry and spending on the internal improvements in support of economic growth. The South, on the other hand, generally supported the expansion of slavery and opposed protective tariffs and internal improvements that increased the price of goods and taxes the South paid.

These differing views erupted into disputes that threatened the country with disunion. In 1819, the admittance of Missouri into the Union led to tensions between the sections that Clay helped resolve. Later, in 1832, a fierce quarrel broke out when South Carolina held a convention that “nullified” a protective tariff it labeled the “Tariff of Abominations.” Clay believed that the American republic was built on “that great principle of compromise and concession, which lies at the bottom of our institutions.” Regarding the crisis, Clay averred it was “true my friends do not get all they could wish for; and the gentlemen of the other side do not obtain all they might desire; but both will gain all that in my humble opinion is proper to be given in the present condition of the country.” Consequently, Congress passed the Force Bill as well as a compromise tariff lowering rates.

Clay retired from the Senate in 1842 (where he had served since 1831) and attempted a failed run for the Whig Party nomination for president in 1848. Soon after that, a new crisis threatened the Union when the U.S. acquired territory after the Mexican-American war and disputes broke out over whether the land should allow slavery or not. Despite his old age, Clay attempted to broker one final compromise.

On December 3, 1849, members of Congress and spectators honored seventy-two-year-old Senator Henry Clay from Kentucky, who had first been elected to the House of Representatives in 1810. Although he had to stop and catch his breath several times and was overcome by coughing fits, Clay’s arrival in the chamber was met with a thunderous ovation. Graciously, Clay rose and said, “Much deference and consideration are shown me by even political opponents. I shall by a cruise of calmness, moderation, and dignity endeavor to preserve these kindly feelings.” Clay received such a welcome because of his reputation for honesty, humility, patriotism, willingness to compromise, and integrity.

After a few years of not serving in the legislature, Clay returned to the Senate in order to answer the call from a deeply-divided country that sorely needed his character and skill in political compromise. Congress was representative of the divisions that wracked American society at that moment. A southern Senator openly avowed, “I am for disunion…I will devote all I am and all I have on earth to its consummation.” For their part, northern representatives were just as willing to sunder the Union to let slaveholders go. The primary issue responsible for this discord was the issue of slavery and its expansion into the western territories recently acquired from Mexico.

Clay supported gradual emancipation and colonization back to Africa but was primarily concerned with reconciling the discordant sides that threatened the Union. He sought above all to prevent “the dissolution of the Union . . . and all the horrors of civil war” and “exercise mutual and friendly forbearance” for the good of their “glorious country.” Clay had devoted his entire life to public service and had engineered many of the key compromises of the nineteenth century to preserve the Union from the fierce sectional debates over slavery. One colleague praised him for that integrity and knew that Clay was the person to turn to during the crisis, stating, “I rejoice at your election to the Senate….In these days of inordinate personal ambition it is cheering to see that there is one state in the Union where attachment to the honor and interest of the nation prevails over all personal considerations.”

Clay was deeply troubled by the state of affairs in Congress and around the nation. He was confident enough in his purpose to realize that the nation needed his skill and sprang into action. He informed his son that he had “been thinking much of proposing some comprehensive scheme of settling amicably the whole question in all its bearings.”

On January 23, 1850, Clay rose from his chair in the Senate to offer his resolutions for consideration. He thought that they “propose an amicable arrangement of all questions in controversy between the free and slave States, growing out of the subject of slavery.” A few weeks later, Clay gave a speech defending his resolutions. Congress—and the country—in Clay’s estimation was “so oppressed, so appalled, so anxious.” He prayed “to implore Him . . . to calm the violence and rage of party – to still passion – to allow reason once more to resume its empire.” He called on his fellow Senators to “elevate” themselves “from the mad and mire of mere party contentions” and act “as responsible men, and as lovers of liberty, and lovers, above all, of this Union.” When he was overcome by fatigue, the Senate adjourned for the day out of respect for Clay and gave him the floor the following morning.

Clay recovered his failing strength and asked the next day for “mutual concession” from both sides of the question. He offered his resolutions as “an olive branch to both parts of this distracted, and at this moment, unhappy country.” He finished with an emotional appeal: “Here I stand and here I mean to stand and die.” The Constitution, he averred, was made for “posterity, undefined, unlimited, permanent, and perpetual.” He called on all Americans “by all their love of liberty—by all their veneration for their ancestors—by all their regard for posterity…to pause—solemnly to pause—at the edge of the precipice, before the fearful and disastrous leap is taken into the yawning abyss below. I pray I may not survive to behold the sad and heartrending spectacle.” When a southern Senator objected that he was betraying the South by granting too much to the North, Clay retorted, “I know no South, no East, no West, to which I owe my allegiance…My allegiance is to this Union.”

Over the next several months, Clay continued to act at The Great Compromiser. Even though John Calhoun had been a leader of states nullifying federal law and had talked of disunion for decades, Clay offered a laudatory eulogy when Calhoun died in the middle of the debate at the end of March. At the end of July, during a blistering hot day, Clay mustered the energy for one last defense of his compromise resolutions. It was one of the longest speeches of his lengthy, dignified career. He praised northern and southern congressmen for their spirit of compromise in “seeing the crisis of their common country . . . have met together . . . to compare their opinions upon this great measure of reconciliation and harmony.” He received long and sustained applause as he collapsed in a pool of sweat, his energy utterly spent. Clay had to vacation on the Rhode Island coast to recover his strength and left it to Illinois Senator Stephen Douglas to engineer a final passage of the bills, which President Millard Fillmore then signed.

In his final act of public life that showed his integrity and commitment to the country, Clay created the Compromise of 1850 that preserved the Union and averted civil war, even if only for a short time. Over several decades, he stood for the principle of doing what was good for his country and dedicated himself to deliberating and compromising in order to find practical solutions to seemingly intractable problems. As Stephen Douglas said of Clay, “Let it always be said of old Hal that he fought a glorious and patriotic battle. No man was ever governed by higher and purer motives.”