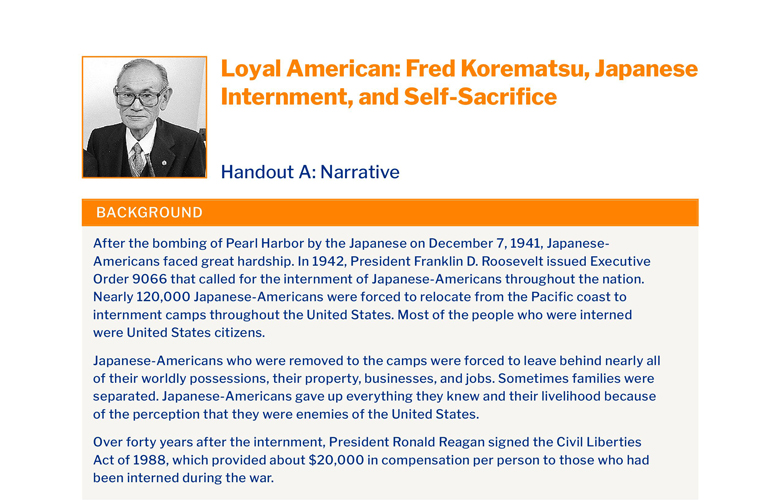 After the bombing of Pearl Harbor by the Japanese on December 7, 1941, Japanese Americans faced great hardship. In 1942, President Franklin D. Roosevelt issued Executive Order 9066 that called for the internment of Japanese-Americans throughout the nation. Nearly 120,000 Japanese-Americans were forced to relocate from the Pacific coast to internment camps throughout the United States. Most of the people who were interned were United States citizens.

Japanese-Americans who were removed to the camps were forced to leave behind nearly all of their worldly possessions, their property, businesses, and jobs. Sometimes families were separated. Japanese-Americans gave up everything they knew and their livelihood because of the perception that they were enemies of the United States.

Over forty years after the internment, President Ronald Reagan signed the Civil Liberties Act of 1988, which provided about $20,000 in compensation per person to those who had been interned during the war.

Fred Korematsu was born in 1919 in Oakland, California. Raised by Japanese immigrants who arrived in the United States in 1905, Fred was active in his community and school and worked in his family’s flower business. Following the attack on Pearl Harbor, Fred tried to help the American cause by working as a welder and was even promoted to foreman, but he was eventually forced out of the job because of his Japanese descent.

Shortly after President Franklin D. Roosevelt issued Executive Order 9066 in 1942, which called for the relocation of many Japanese, Fred made a drastic decision. He couldn’t face the anti-Japanese sentiments any longer, and he decided to have minor cosmetic surgery in order to pass as a Caucasian man named Clyde Sarah. When he was ordered to assemble in Oakland, California to be sent to an internment camp, Fred did not report. He ran from the internment officers for weeks before he was arrested and held in jail in San Francisco.

American Civil Liberties Union (ACLU) attorney Ernest Besig decided to represent Fred Korematsu in his case against the executive order. Fred was tried and convicted for failing to obey military orders and was sentenced to probation for five years. The government then sent Fred and his family to the Central Utah War Relocation Center, also known as the Topaz War Relocation Center. The family was forced to live in a converted horse stall during their internment. Because Fred lacked experience, he could not find a decent job while in the camp. He was forced to do menial tasks for low wages to support himself.

During his time at the camp, Fred was looked down upon by other Japanese-Americans who had followed the law to show the government that they were loyal Americans. Fred felt isolated, alone, and continued to face discrimination even from people of his own descent. He sacrificed his reputation, livelihood, and well-being as he continued to fight for his rights in court.

Fred continued to appeal his conviction through the U.S. Court of Appeals and the Supreme Court even while interned. In Korematsu v. United States (1944), the Supreme Court upheld Fred’s conviction, stating that internment of Japanese-Americans was lawful in times of “emergency and peril.”

After the war ended, Fred lived in Utah for a short time and then moved to Detroit. In 1946, Fred broke more barriers due to his interracial marriage with wife Kathryn. Fred eventually returned to the San Francisco area with his family in 1949. Fred Korematsu’s story did not end with his release from the internment camp. Fred continued to pursue justice for those Japanese-Americans who were forced into camps because of their ancestry. After an in-depth investigation into his case, Fred Korematsu’s conviction was officially overturned in 1983. In explaining why he decided to challenge the original ruling 40 years later, Fred stated:

According to the Supreme Court decision regarding my case, being an American citizen was not enough. They say you have to look like one, otherwise they say you can’t tell a difference between a loyal and a disloyal American. I thought that this decision was wrong and I still feel that way. As long as my record stands in federal court, any American citizen can be held in prison or concentration camps without a trial or a hearing. That is if they look like the enemy of our country. Therefore, I would like to see the government admit that they were wrong and do something about it so this will never happen again to any American citizen of any race, creed or color.