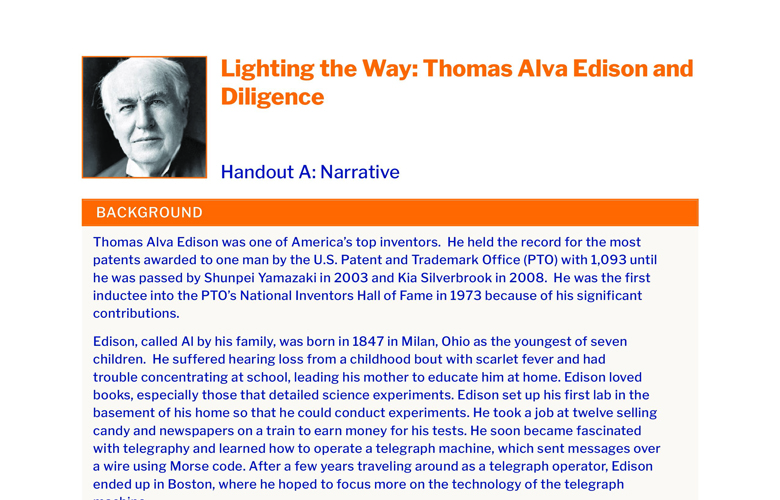 Thomas Alva Edison was one of America’s top inventors. He held the record for the most patents awarded to one man by the U.S. Patent and Trademark Office (PTO) with 1,093 until he was passed by Shunpei Yamazaki in 2003 and Kia Silverbrook in 2008. He was the first inductee into the PTO’s National Inventors Hall of Fame in 1973 because of his significant contributions.

Edison, called Al by his family, was born in 1847 in Milan, Ohio as the youngest of seven children. He suffered hearing loss from a childhood bout with scarlet fever and had trouble concentrating at school, leading his mother to educate him at home. Edison loved books, especially those that detailed science experiments. Edison set up his first lab in the basement of his home so that he could conduct experiments. He took a job at twelve selling candy and newspapers on a train to earn money for his tests. He soon became fascinated with telegraphy and learned how to operate a telegraph machine, which sent messages over a wire using Morse code. After a few years traveling around as a telegraph operator, Edison ended up in Boston, where he hoped to focus more on the technology of the telegraph machine.

“I am now twenty-one. I may live to be fifty,” Edison said to his friend Milt Adams. “I have got so much to do and life is so short, I’m going to hustle.” Thus began Thomas Edison’s approach to his new life in Boston. He would be diligent, not slothful, and by careful and persistent work, continue his experiments with technology. Employed as a telegraph operator by night, during the day Edison tinkered with a duplex telegraph, one that could send two messages at once. In addition, he was awarded his first patent for the creation of an electronic vote recorder that could be used in a legislature. He also made improvements on a stock ticker used by investors wanting up-to-date information on stock or gold prices. After selling the rights to his model, Edison finally had enough money to devote himself to inventions.

Despite his marriage to Mary Stillwell in 1871 and three children, Edison focused on his inventions, often working sixteen-hour days and sleeping in his workshop. Edison was meticulous in his experiments, carefully detailing his work in a series of notebooks. His thoroughness in documenting his notes resulted in an amazing archive of his work comprised of 3,000 of these notebooks, each measuring 6 inches by 9 inches and containing 280 pages.

Most importantly, however, Edison did not try to work alone. He knew that he could accomplish more with a team of inventors. In 1875, he purchased land in Menlo Park, New Jersey and set up what he called an “Invention Factory.” Edison believed that through careful and persistent work, his team would be able to “come up with a minor invention every ten days and a big thing about every six months.” One of the lab’s first successes was to take Alexander Graham Bell’s telephone and devise a carbon-button transmitter in order to improve the sound. He then went on to invent the phonograph as a way to record sound. People at the time were amazed at his inventions and began to refer to him as the “Wizard of Menlo Park.”

By 1878, a new field sparked his interest—electricity. Edison once remarked, “I find out what the world needs. Then I go ahead and try to invent it.” What the world needed was a dependable, long-lasting electric light bulb. Edison and his team set to work developing a filament that would burn in the light bulb for hours when an electric current passed through it. They were diligent in their efforts. Meticulously testing different materials, Edison finally applied for a patent for a carbonized cardboard filament in 1879 and showed off his invention to the world on December 31, when he lit up the Menlo Park lab with thousands of electric lights which could be turned on and off. When asked about his formula for success Edison explained, “the trouble with other inventors is that they try a few things and quit. I never quit until I get what I want.”

What Edison wanted now was for people to use his light bulbs, but to do that, cities and towns would need a supply of electricity. Thus, Edison designed an electric power plant system and installed it on Pearl Street in New York City. This power plant became the model for cities all over the country.

However, not all of Edison’s innovations were successful. In fact, Henry Ford claimed that Edison was “the world’s greatest inventor and world’s worst businessman.” His Edison Electric Light Company, for example, only became successful when it was reorganized as General Electric and operated as an independent company. Edison also faced significant competition from rivals like George Westinghouse and Alexander Graham Bell, who worked to refine his inventions into new products. He lost over two million dollars on an iron ore processing factory and faced a fire that destroyed his lab in 1914.

What was Edison’s reaction to setbacks? Well, after the devastating fire, “he cracked jokes, laughed, and declared, ‘Although I am over 67 years old, I’ll start all over again tomorrow.’” He set about the process of rebuilding the facility. He was aided in this endeavor by his second wife, Mina, his children, and trusted employees. Edison continued to work on the development of a motion picture camera and a projector, earning the title of “Father of Motion Pictures.” Edison worked hard on developing a storage battery to power electric cars as he investigated and tested new ideas by recording them in his notebooks. He tackled his last project in his eighties when he determined to develop a domestic source of rubber. He started a series of experiments on a variety of different plants, but poor health prevented him from completing his investigation.

Thomas Edison died at home in West Orange, New Jersey on October 18, 1931. President Herbert Hoover asked the entire country to dim their lights for a few minutes on the evening of his funeral as a tribute for his most significant invention. Edison’s legacy endures as a model for careful and persistent hard work to accomplish a goal. In an interview on April 3, 1898, Edison stated his formula for success was based on the way that he had chosen to live his own life:

“If you want a recipe for how to succeed as an inventor I can give it to you in a very few words, and it will do for any other business in which you might wish to engage. First, find out if there is a real need for the thing which you wish to invent. Then start thinking about it. Get up at six o’clock the first morning and work until two o’clock in the next morning. Keep on doing this until something in your line develops itself. If it don’t do so pretty soon, you had better shorten your sleeping hours and work a little harder while you are awake. If you follow that rule, you can succeed as an inventor, or as anything else, for that matter.”