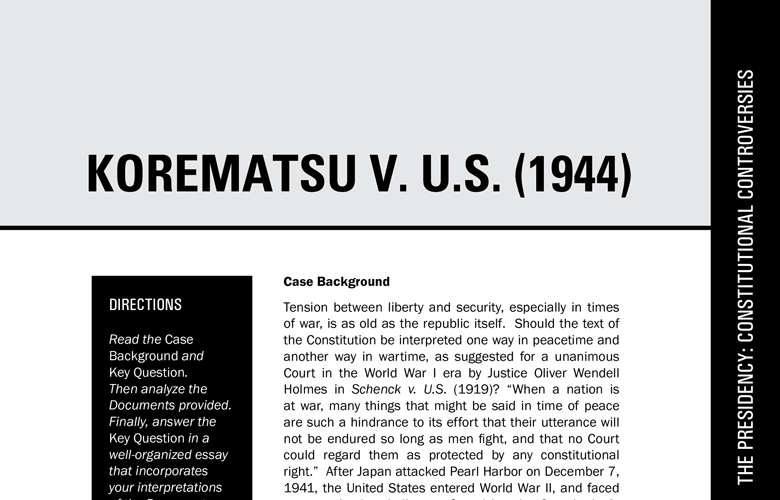 Tension between liberty and security, especially in times of war, is as old as the republic itself. Should the text of the Constitution be interpreted one way in peacetime and another way in wartime, as suggested for a unanimous Court in the World War I era by Justice Oliver Wendell Holmes in Schenck v. U.S. (1919)? “When a nation is at war, many things that might be said in time of peace are such a hindrance to its effort that their utterance will not be endured so long as men fight, and that no Court could regard them as protected by any constitutional right.” After Japan attacked Pearl Harbor on December 7, 1941, the United States entered World War II, and faced once again the challenge of applying the Constitution’s guarantees in the context of wartime. Based on advice from the military that there was a real threat of Japanese invasion of the west coast, as well as a credible danger of Japanese espionage, the U.S. government ordered the relocation and detention of Japanese Americans living in that region. From April of 1942 until the end of the war in September of 1945, 110,000 persons of Japanese ancestry, most of them U.S. citizens, were deprived of their liberty and held in detention camps far from their former homes. They lost most of the property they had entrusted to government authorities, but had no way of documenting their losses because they only had a few days’ notice to dispose of their property before reporting to assembly centers for relocation. The surprise attack on Pearl Harbor was very real, as was the fear engendered by it. How real was the threat of espionage?

Faced with extensive questioning on this point by the Supreme Court in oral argument, Solicitor General Charles Fahy convinced a majority of the Justices that the detention of Japanese Americans was justified by “military necessity.”