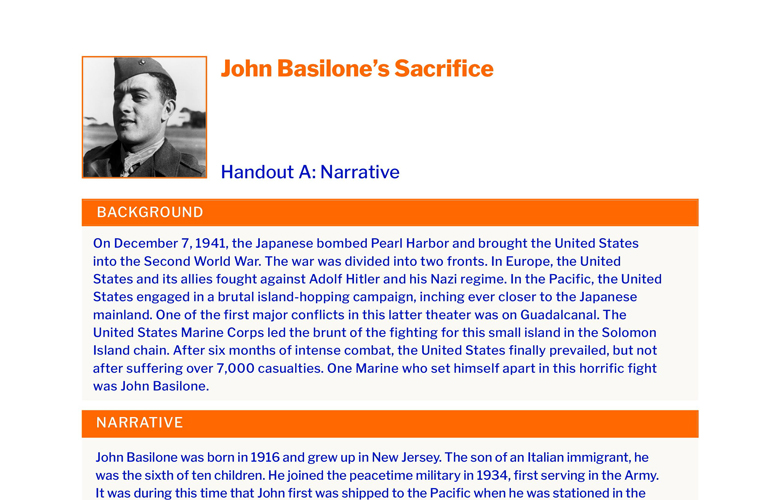 On December 7, 1941, the Japanese bombed Pearl Harbor and brought the United States into the Second World War. The war was divided into two fronts. In Europe, the United States and its allies fought against Adolf Hitler and his Nazi regime. In the Pacific, the United States engaged in a brutal island-hopping campaign, inching ever closer to the Japanese mainland. One of the first major conflicts in this latter theater was on Guadalcanal. The United States Marine Corps led the brunt of the fighting for this small island in the Solomon Island chain. After six months of intense combat, the United States finally prevailed, but not after suffering over 7,000 casualties. One Marine who set himself apart in this horrific fight was John Basilone.

John Basilone was born in 1916 and grew up in New Jersey. The son of an Italian immigrant, he was the sixth of ten children. He joined the peacetime military in 1934, first serving in the Army. It was during this time that John first was shipped to the Pacific when he was stationed in the Philippines for three years. While there, he gained a reputation as a boxer and a rabble-rouser.

After four years in the Army, John believed he needed a bigger challenge. So, in 1940, he enlisted with the Marine Corps and went back to basic training. With the Marines, John became a machine gun section leader, in charge of the Browning .30 caliber machine gun for his unit.

The United States Pacific fleet had suffered immensely during the raid on Pearl Harbor on December 7, 1941. While the Japanese had been attacking Pearl Harbor, they had simultaneously attacked other U.S. possessions scattered across the Pacific, including Wake Island and the Philippines. By mid-1942, they were taking aim at the island of Midway. It was here that the United States inflicted a resounding defeat on the Japanese Navy.

With this victory, the United States took the offensive. One of their first targets was the island of Guadalcanal in the Solomon Islands chain. Taking Guadalcanal would allow for the Allies to improve their supply lines and move them further north into the Pacific, inching ever closer to the islands of Japan.

The Marines, including John Basilone, landed on the island in August of 1942. After securing a perimeter, military engineers began to construct what would become known as Henderson Field. This airbase would allow for the Allies to have a base of operations with which to attack the rest of the Solomon Islands as well as providing cover for the troops on Guadalcanal. It was in the fighting for this airfield that John Basilone would first earn his reputation for heroism and valor.

On October 24, the Japanese launched a frontal attack on the airfield. Between the Japanese and their objective stood John Basilone and several thousand Marines. Exhausted from the previous months fighting, low on supplies because of Japanese naval operations, and suffering from dysentery, malaria, and other tropical diseases, the Marines fought back tenaciously.

John commanded two sections of machine guns, and for two days the fighting ebbed and flowed around him. John fought with nearly no sleep, constantly working to fix the machine guns and keep them firing. When one of his guns went out of action, he used his .45 caliber pistol and continued the fight. As the conflict raged, John worked to get an extra gun into position all while under heavy enemy fire. When his section ran low on ammunition, John crossed through heavily contested territory to secure more. John continued to hold his position until Allied units finally relieved him. By the end of the engagement, John and his section had virtually annihilated the enemy forces that opposed them.

For this action, John Basilone was awarded the Congressional Medal of Honor. He was the first Marine in the conflict to be awarded this prestigious medal for gallantry. This turned Basilone into an overnight celebrity, and the government wanted to recruit him for a different task. To keep the war funded, the government had undertaken massive bond drives. Citizens could purchase government bonds, the money for which was used to fund the war effort directly. Selling these bonds required that citizens believe in the war effort. Who better to use as a spokesman than those who had just been in combat? John Basilone had a new job.

John began to tour the United States promoting war bonds. He and his family were put on newsreels that broadcast in theaters across the nation. He gave hundreds of speeches and raised thousands of dollars in bonds. As important as this work was, however, John never felt it was his purpose. John knew he had a gift for operating the machines of war and for keeping a cool head in the chaos of combat. He believed that he could do more for the war effort by serving with the soldiers, sailors, and airmen that were in harm’s way than he could as a fundraiser. So, after months of haranguing officials, John got his wish to return to active duty.

He was first sent to Camp Pendleton in California, helping to train new Marines getting ready to be shipped out to the Pacific. Here his experience in theater and his skill with weapons were very beneficial. Although training young men for combat kept him busy, it did not prevent him from meeting Lena Mae Riggi, whom he married on July 10, 1944.

Later that year, John was finally granted his wish and was shipped back out with the fleet. On February 19, 1945, he landed with the 5th Marine division on the island of Iwo Jima. In the first day of fighting, he once again displayed incredible gallantry. While under heavy fire on the beach, John ran up and down the line, encouraging Marines to move inland. When they encountered a Japanese strongpoint, John had his men draw their fire while he made his way around and on top of the emplacement. Once there, he tossed in grenades and knocked the enemy position out of action. This action helped free up the beach and allowed the pinned Marines to advance inland. For this action, he was awarded the Navy Cross, the second highest honor for members of the United States Navy and Marine Corps.

Shortly after this gallant action, John was hit by enemy fire. He died there on the beach before he could be evacuated. John knew his purpose. Given the choice of staying safely at home with his new wife and family, John had chosen to go back and face enemy fire because he knew that was where he could do the most good. John knew that through his actions he could save countless lives, and so willingly put his on the line to save his comrades in arms. For this sacrifice, he would forever be honored by his nation.