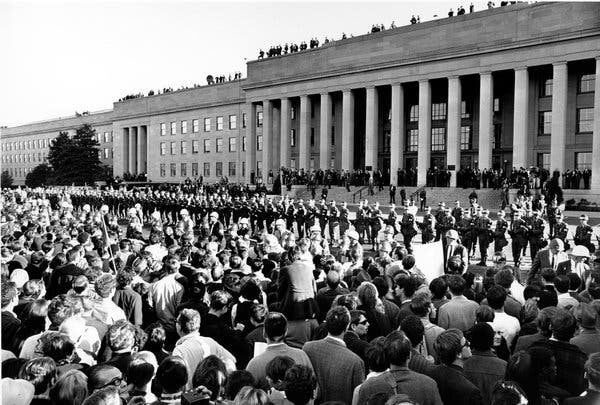 During the 1960s, many young people were involved in diverse movements that later merged into the anti-war movement. The student movement was led by Students for a Democratic Society, a group of radical young intellectuals who were dissatisfied with Cold War containment policy, the military-industrial complex, and corporate affluence and power. Many in the student movement participated in Freedom Summer and supported the Berkeley Free Speech Movement. Other young people embraced the counter-cultural lifestyle of the Beatniks and questioned social and cultural norms. They listened to folk and rock music, took drugs, wore their hair long, and dressed in “hippie” clothing to express their opposition to cultural norms. Some joined communes in bohemian neighborhoods in San Francisco, New York, and other cities. Some joined fringe groups such as the “Yippies,” or Youth International Party, which engaged in acts of absurd street theater with stunts such as nominating a pig for president and burning money to mock American society. Others supported movements such as those in favor of civil rights, women’s rights, or environmentalism. Millions of other students fell on a spectrum of political activism, and many may have joined a local anti-war protest. In particular, fear of being drafted spurred many young people to protest the war.

In 1967, a group of anti-war activists formed the National Mobilization Committee to End the War in Vietnam to organize large demonstrations in opposition to the war. Various groups collaborated with them to plan a demonstration in Washington, DC. Some protestors favored merely rallying peacefully on the National Mall to attract attention. Radical protestors such as Abbie Hoffman, one of the founders of the Yippies, used the event to critique the military, the war, and the status quo. Hoffman claimed that protestors would encircle and levitate the Pentagon, the headquarters of the U.S. Department of Defense, to perform an exorcism. More-serious protestors planned to go to the Pentagon because they wanted to apply pressure on military officials to end the war or express displeasure at this symbol of the military industrial complex. The demonstration began near the Lincoln Memorial, where approximately 75,000 protesters gathered for a traditional rally. When that concluded, an estimated 35,000 to 50,000 demonstrators crossed the Memorial Bridge to the Pentagon, located across the Potomac River in Northern Virginia. They were met with military police, federal marshals, and U.S. Army troops stationed in place with rifles and riot gear. Most of the protestors were cordoned off, but some broke through and entered the Pentagon. By the end of the march, nearly 700 had been arrested for various acts of civil disobedience. Young people continued to lead protests against the Vietnam War during the Nixon administration for controversial decisions during the de-escalation process.