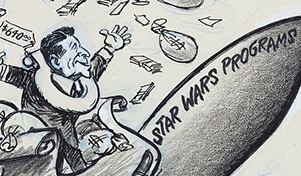 Herbert Block was an American cartoonist who created works from 1927 until his death in 2001 under the name Herblock. Throughout his career, Block lampooned figures such as Joseph McCarthy and Richard Nixon for their political beliefs and conduct while holding office. When Ronald Reagan took office, the liberal-leaning cartoonist found plenty that he disagreed with the new president on. Block developed a number of cartoons throughout Reagan’s tenure in which he criticized the president’s policies, proposals, and actions, including so-called Reaganomics, Star Wars, and the Iran-Contra Affair.

Figure 1: In this 1984 cartoon entitled “Strange How Some Choose to Live Like That Instead of Choosing to Be Rich Like Us,” President Ronald Reagan and counselor Edwin Meese ride in a limousine, commenting on the poor and homeless individuals they pass by in their car. (credit: A 1984 Herblock Cartoon, © The Herb Block Foundation)

Figure 2: This cartoon, entitled “Joy to the World,” was published on December 17, 1985, in the Washington Post. Herblock portrayed Secretary of Defense Caspar Weinberger as Santa Claus riding a rocket referencing Reagan’s “Star Wars” initiative. Weinberger drops money and contracts from his sleigh/rocket while wearing a toilet seat with a $640 price tag around this next—a reference to the 1985 discovery that the military paid $640 for airborne toilet-seat covers for C-5 cargo planes. (credit: A 1985 Herblock Cartoon, © The Herb Block Foundation)

Figure 3: In this 1987 cartoon entitled “It Didn’t Happen,” Herblock parodies the Iran-Contra affair by depicting Reagan’s responses to queries about the scandal as different takes on a movie set. (credit: A 1987 Herblock Cartoon, © The Herb Block Foundation)

Image 1 (“Strange How Some Choose to Live Like That”) http://www.loc.gov/exhibits/herblock/joy-to-the-world.html#obj0

Image 2 (“Joy to the World”) http://www.loc.gov/exhibits/herblock/joy-to-the-world.html#obj3