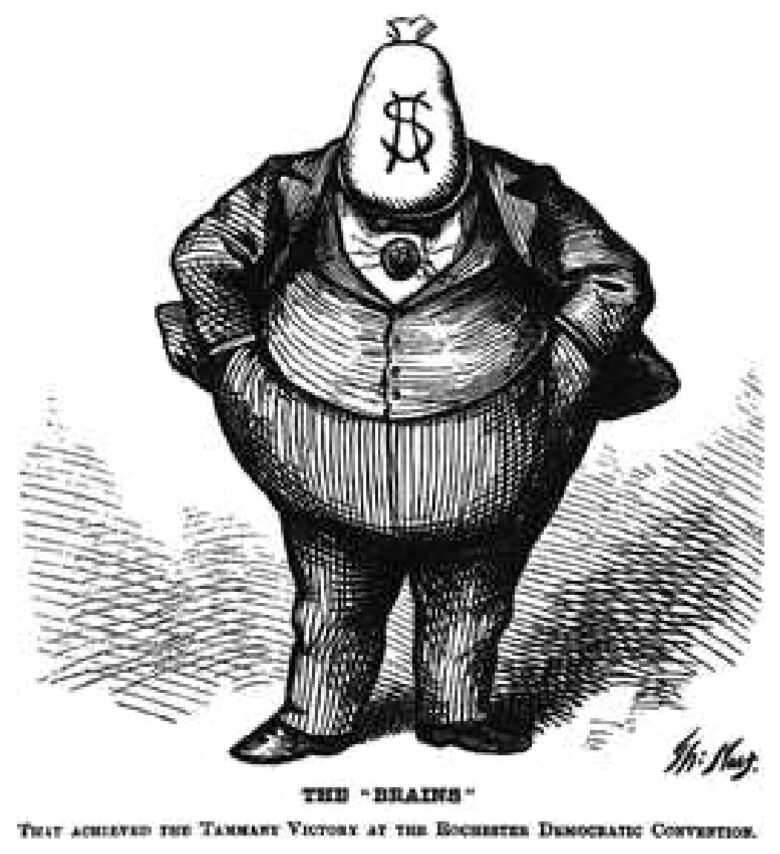 From an early age, William “Boss” Tweed discovered he had a knack for politics. His political career began in 1850, when he ran as an alderman from the Seventh Ward of New York City. He served a frustrating term in Congress during the divisive sectional tensions of the 1850s and then happily returned to local politics, where he believed the action was. He quickly became one of the leading, and most corrupt, politicians in New York City. Tweed and his cronies in Tammany Hall—the organization that controlled the Democratic Party and most of its votes—directed local services, controlled elections, and received millions of dollars in kickbacks, bribes, and other forms of brazen corruption.

Tweed’s greed drew the attention of Thomas Nast, a cartoonist for the periodical Harper’s Weekly. Nast’s cartoons drew attention to Tweed and his many illegal activities. Tweed feared Nast’s cartoons to a much greater extent than newspaper articles, because many of his constituents were illiterate, and he even offered Nast a bribe to stop these public criticisms. Tweed was right to fear this criticism because Nast’s cartoons helped lead to his downfall and arrest in 1876. Tweed died in jail in 1878, and Nast continued to draw for Harper’s Weekly until 1886.

1: In Counting there is Courage: https://en.wikipedia.org/wiki/William_M._Tweed#/media/File:Boss_Tweed,_Nast.jpg