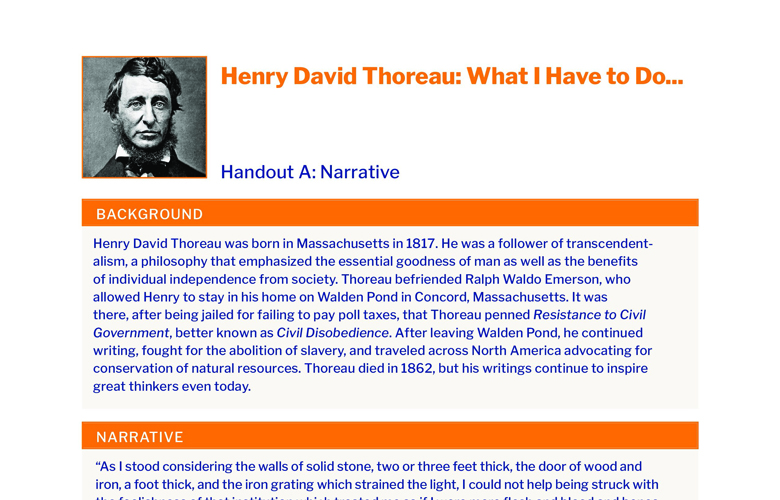 Henry David Thoreau was born in Massachusetts in 1817. He was a follower of transcendentalism, a philosophy that emphasized the essential goodness of man as well as the benefits of individual independence from society. Thoreau befriended Ralph Waldo Emerson, who allowed Henry to stay in his home on Walden Pond in Concord, Massachusetts. It was there, after being jailed for failing to pay poll taxes, that Thoreau penned Resistance to Civil Government, better known as Civil Disobedience. After leaving Walden Pond, he continued writing, fought for the abolition of slavery, and traveled across North America advocating for conservation of natural resources. Thoreau died in 1862, but his writings continue to inspire great thinkers even today.

“As I stood considering the walls of solid stone, two or three feet thick, the door of wood and iron, a foot thick, and the iron grating which strained the light, I could not help being struck with the foolishness of that institution which treated me as if I were mere flesh and blood and bones, to be locked up. . . . I did not for a moment feel confined, and the walls seemed a great waste of stone and mortar.” Locked in jail, Henry David Thoreau felt free.

For over a year, Thoreau had been living in a small, bare cabin near Walden Pond, Massachusetts, observing, admiring, and absorbing the natural world. In the middle of the Industrial Revolution of the late nineteenth century, he had decided to set himself apart and live according to transcendentalist principles: simplicity, economy, and moderation.

Now he found himself in an even more spartan environment—prison. He had known that he would end up there and made no attempts to deny that he committed a crime. He intended to make a point.

The state of Massachusetts, like a number of others, required that citizens pay a tax to vote (commonly called a “poll tax”). In 1846, the United States became heavily involved in a war with Mexico. As a staunch abolitionist, Thoreau strongly opposed to the war, as he believed that winning it would surely lead to an expansion of slavery throughout the West and South. He adamantly opposed the use of his tax money to support the government’s efforts, explaining, “What I have to do is to see that I do not lend myself to the wrong which I condemn.”

Thoreau’s opposition to slavery was not new. He had been raised in a home where slavery was regarded as evil. His mother was one of the early members of the Concord Woman’s AntiSlavery Society, which was founded in 1837. The Thoreaus also participated in the Underground Railroad, helping lead many escaped slaves to freedom. Raised in this environment, Thoreau was no stranger to the principle of civil disobedience. In fact, the founder of the Concord Woman’s Anti-Slavery Society remembered in 1851 that “Henry Thoreau more often than any other man in Concord” was involved with caring and providing for the “passengers” that came through at night on the Underground Railroad.

Unlike his mother, who was involved in abolitionist organizations, Thoreau placed more emphasis on the individual’s responsibility to live a life of integrity that did not support unjust enterprises. Thus, he refused to pay his poll tax and was arrested. His actions got the attention of the community, and he received some support for his protest. While incarcerated, Ralph Waldo Emerson visited Thoreau, asking, “Henry, what are you doing in here?” Thoreau quickly retorted, “What are you doing out there?” To follow an unjust law, according to Thoreau, was an immoral act. “Under a government which imprisons any unjustly, the true place for a just man is also a prison,” he reasoned. “If the alternative is to keep all just men in prison, or give up war and slavery, the State will not hesitate which to choose.”

Acting with such consistency and integrity was not easy. In his essay about the experience, Civil Disobedience, Thoreau reflected, “I felt as if I alone of all my townsmen had paid my tax.” His fellow citizens, he lamented, lacked the integrity to live up to their ideals. They talked but they would not act. “They hesitate, and they regret, and sometimes they petition; but they do nothing in earnest and with effect. They will wait, well disposed, for others to remedy the evil,” Thoreau bemoaned. By standing up for his beliefs, Thoreau paid his version of a “tax”—a night in jail—and fulfilled what he thought were his responsibilities as a citizen.

The seemingly small act was not simply symbolic. Thoreau hoped that his example might inspire others to act with integrity and stay true to their beliefs. “If one honest man, in this State of Massachusetts, ceasing to hold slaves, were actually to withdraw from this copartnership, and be locked up in the county jail, it would be the abolition of slavery in America,” Thoreau asserted.

The next day, however, Thoreau was a free man. His aunt paid the tax for him and he was released. Thoreau was not pleased. Nevertheless, he continued to protest slavery. He applauded the actions of abolitionist John Brown and his assault on the U.S. Arsenal at Harper’s Ferry. He also openly condemned the U.S. government for hanging Brown and for its support of the Fugitive Slave Law.

In a speech to the citizens of Concord, Massachusetts in 1859, Thoreau declared, “I would rather see the statue of Captain Brown in the Massachusetts State-House yard, than that of any other man whom I know. I rejoice that I live in this age, that I am his contemporary. What a contrast, when we turn to that political party which is so anxiously shuffling him and his plot out of its way, and looking around for . . . someone who will execute the Fugitive Slave Law, and all those other unjust laws which he took up arms to annul!”

Thoreau’s ideals of uncompromising honesty and integrity influenced many people even decades later. His words and actions inspired Americans opposed to McCarthyism in the 1950s, those fighting apartheid in South Africa in the 1960s, and the antiwar efforts of the 1970s. Mahatma Gandhi and Martin Luther King, Jr. embraced his ideals of passive resistance and civil disobedience. Henry David Thoreau understood that one person of integrity, who holds to his or her beliefs in action as well as word, can change the world. As he put it, “For it matters not how small the beginning may seem to be: what is once well done is done for ever.”