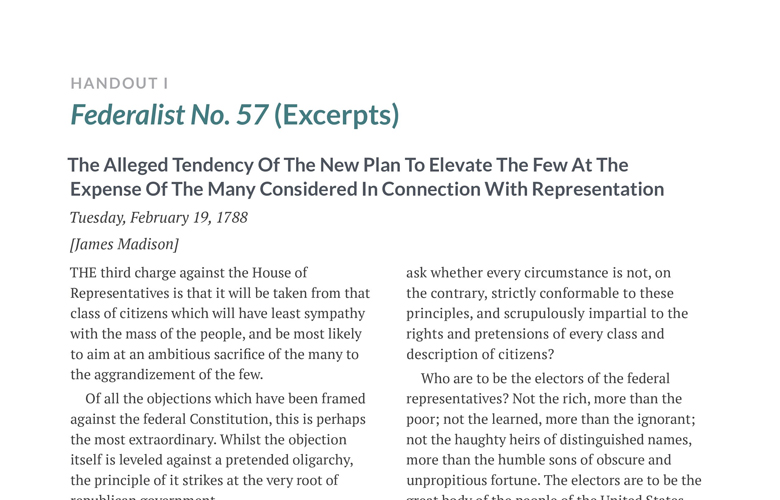 The Alleged Tendency Of The New Plan To Elevate The Few At The Expense Of The Many Considered In Connection With Representation
Tuesday, February 19, 1788
[James Madison]

THE third charge against the House of Representatives is that it will be taken from that class of citizens which will have least sympathy with the mass of the people, and be most likely to aim at an ambitious sacrifice of the many to the aggrandizement of the few.

Of all the objections which have been framed against the federal Constitution, this is perhaps the most extraordinary. Whilst the objection itself is leveled against a pretended oligarchy, the principle of it strikes at the very root of republican government.

The aim of every political constitution is, or ought to be, first to obtain for rulers men who possess most wisdom to discern, and most virtue to pursue, the common good of the society, and in the next place, to take the most effectual precautions for keeping them virtuous whilst they continue to hold their public trust. The elective mode of obtaining rulers is the characteristic policy of republican government. The means relied on in this form of government for preventing their degeneracy are numerous and various. The most effectual one is such a limitation of the term of appointments as will maintain a proper responsibility to the people.

Let me now ask what circumstance there is in the constitution of the House of Representatives that violates the principles of republican government, or favors the elevation of the few on the ruins of the many? Let me ask whether every circumstance is not, on the contrary, strictly conformable to these principles, and scrupulously impartial to the rights and pretensions of every class and description of citizens?

Who are to be the objects of popular choice? Every citizen whose merit may recommend him to the esteem and confidence of his country. No qualification of wealth, of birth, of religious faith, or of civil profession is permitted to fetter the judgement or disappoint the inclination of the people.

If we consider the situation of the men on whom the free suffrages of their fellow-citizens may confer the representative trust, we shall find it involving every security which can be devised or desired for their fidelity to their constituents.

In the first place, as they will have been distinguished by the preference of their fellow citizens, we are to presume that in general they will be somewhat distinguished also by those qualities which entitle them to it, and which promise a sincere and scrupulous regard to the nature of their engagements.

In the second place, they will enter into the public service under circumstances which cannot fail to produce a temporary affection at least to their constituents. There is in every breast a sensibility to marks of honor, of favor, of esteem, and of confidence, which, apart from all considerations of interest, is some pledge for grateful and benevolent returns. Ingratitude is a common topic of declamation against human nature; and it must be confessed that instances of it are but too frequent and flagrant, both in public and in private life. But the universal and extreme indignation which it inspires is itself a proof of the energy and prevalence of the contrary sentiment.

In the third place, those ties which bind the representative to his constituents are strengthened by motives of a more selfish nature. His pride and vanity attach him to a form of government which favors his pretensions and gives him a share in its honors and distinctions. Whatever hopes or projects might be entertained by a few aspiring characters, it must generally happen that a great proportion of the men deriving their advancement from their influence with the people would have more to hope from a preservation of the favor than from innovations in the government subversive of the authority of the people.

All these securities, however, would be found very insufficient without the restraint of frequent elections. Hence, in the fourth place, the House of Representatives is so constituted as to support in the members an habitual recollection of their dependence on the people.

Before the sentiments impressed on their minds by the mode of their elevation can be effaced by the exercise of power, they will be compelled to anticipate the moment when their power is to cease, when their exercise of it is to be reviewed, and when they must descend to the level from which they were raised; there forever to remain unless a faithful discharge of their trust shall have established their title to a renewal of it.

I will add, as a fifth circumstance in the situation of the House of Representatives, restraining them from oppressive measures, that they can make no law which will not have its full operation on themselves and their friends, as well as on the great mass of the society. This has always been deemed one of the strongest bonds by which human policy can connect the rulers and the people together. It creates between them that communion of interests and sympathy of sentiments of which few governments have furnished examples; but without which every government degenerates into tyranny. If it be asked, what is to restrain the House of Representatives from making legal discriminations in favor of themselves and a particular class of the society? I answer: the genius of the whole system; the nature of just and constitutional laws; and, above all, the vigilant and manly spirit which actuates the people of America—a spirit which nourishes freedom, and in return is nourished by it.

If this spirit shall ever be so far debased as to tolerate a law not obligatory on the legislature, as well as on the people, the people will be prepared to tolerate anything but liberty.

Such will be the relation between the House of Representatives and their constituents. Duty, gratitude, interest, ambition itself, are the cords by which they will be bound to fidelity and sympathy with the great mass of the people. It is possible that these may all be insufficient to control the caprice and wickedness of men. But are they not all that government will admit, and that human prudence can devise? Are they not the genuine and the characteristic means by which republican government provides for the liberty and happiness of the people? Are they not the identical means on which every State government in the Union relies for the attainment of these important ends? What, then, are we to understand by the objection which this paper has combated? What are we to say to the men who profess the most flaming zeal for republican government, yet boldly impeach the principle of it; who pretend to be champions for the right and the capacity of the people to choose their own rulers, yet maintain that they will prefer those only who will immediately and infallibly betray the trust committed to them? …