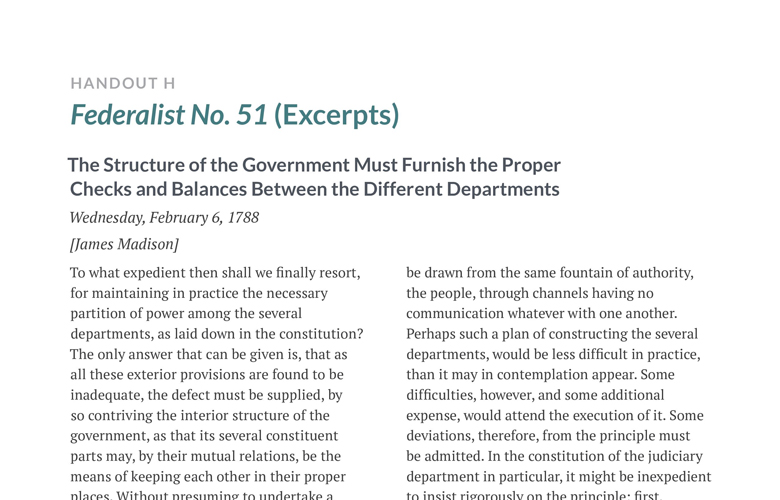 The Structure of the Government Must Furnish the Proper Checks and Balances Between the Different Departments
Wednesday, February 6, 1788
[James Madison]

To what expedient then shall we finally resort, for maintaining in practice the necessary partition of power among the several departments, as laid down in the constitution? The only answer that can be given is, that as all these exterior provisions are found to be inadequate, the defect must be supplied, by so contriving the interior structure of the government, as that its several constituent parts may, by their mutual relations, be the means of keeping each other in their proper places. Without presuming to undertake a full development of this important idea, I will hazard a few general observations, which may perhaps place it in a clearer light, and enable us to form a more correct judgment of the principles and structure of the government planned by the convention.

In order to lay a due foundation for that separate and distinct exercise of the different powers of government, which, to a certain extent, is admitted on all hands to be essential to the preservation of liberty, it is evident that each department should have a will of its own; and consequently should be so constituted, that the members of each should have as little agency as possible in the appointment of the members of the others. Were this principle rigorously adhered to, it would require that all the appointments for the supreme executive, legislative, and judiciary magistracies, should be drawn from the same fountain of authority, the people, through channels having no communication whatever with one another. Perhaps such a plan of constructing the several departments, would be less difficult in practice, than it may in contemplation appear. Some difficulties, however, and some additional expense, would attend the execution of it. Some deviations, therefore, from the principle must be admitted. In the constitution of the judiciary department in particular, it might be inexpedient to insist rigorously on the principle; first, because peculiar qualifications being essential in the members, the primary consideration ought to be to select that mode of choice which best secures these qualifications; secondly, because the permanent tenure by which the appointments are held in that department, must soon destroy all sense of dependence on the authority conferring them.

It is equally evident, that the members of each department should be as little dependent as possible on those of the others, for the emoluments annexed to their offices. Were the executive magistrate, or the judges, not independent of the legislature in this particular, their independence in every other, would be merely nominal.

But the great security against a gradual concentration of the several powers in the same department, consists in giving to those who administer each department, the necessary constitutional means, and personal motives, to resist encroachments of the others. The provision for defence must in this, as in all other cases, be made commensurate to the danger of attack. Ambition must be made to counteract ambition. The interest of the man, must be connected with the constitutional rights of the place. It may be a reflection on human nature, that such devices should be necessary to control the abuses of government. But what is government itself, but the greatest of all reflections on human nature? If men were angels, no government would be necessary. If angels were to govern men, neither external nor internal controls on government would be necessary. In framing a government which is to be administered by men over men, the great difficulty lies in this: you must first enable the government to control the governed; and in the next place oblige it to control itself. A dependence on the people is, no doubt, the primary control on the government; but experience has taught mankind the necessity of auxiliary precautions.

This policy of supplying, by opposite and rival interests, the defect of better motives, might be traced through the whole system of human affairs, private as well as public. We see it particularly displayed in all the subordinate distributions of power; where the constant aim is, to divide and arrange the several offices in such a manner as that each may be a check on the other; that the private interest of every individual may be a centinel over the public rights. These inventions of prudence cannot be less requisite in the distribution of the supreme powers of the state.

But it is not possible to give to each department an equal power of self-defence. In republican government, the legislative authority necessarily predominates. The remedy for this inconveniency is, to divide the legislature into different branches; and to render them, by different modes of election, and different principles of action, as little connected with each other, as the nature of their common functions, and their common dependence on the society, will admit. It may even be necessary to guard against dangerous encroachments by still further precautions. As the weight of the legislative authority requires that it should be thus divided, the weakness of the executive may require, on the other hand, that it should be fortified. An absolute negative on the legislature, appears, at first view, to be the natural defence with which the executive magistrate should be armed. But perhaps it would be neither altogether safe, nor alone sufficient. On ordinary occasions, it might not be exerted with the requisite firmness; and on extraordinary occasions, it might be perfidiously abused. May not this defect of an absolute negative be supplied by some qualified connexion between this weaker department, and the weaker branch of the stronger department, by which the latter may be led to support the constitutional rights of the former, without being too much detached from the rights of its own department? …