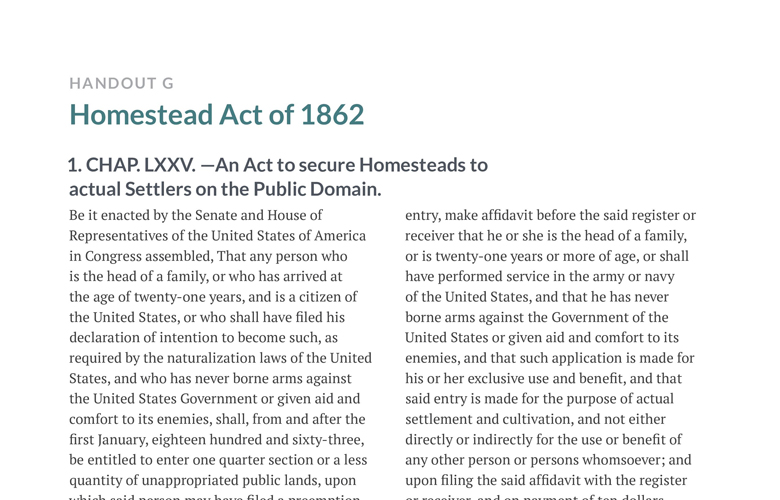 1. CHAP. LXXV. —An Act to secure Homesteads to actual Settlers on the Public Domain.

Be it enacted by the Senate and House of Representatives of the United States of America in Congress assembled, That any person who is the head of a family, or who has arrived at the age of twenty-one years, and is a citizen of the United States, or who shall have filed his declaration of intention to become such, as required by the naturalization laws of the United States, and who has never borne arms against the United States Government or given aid and comfort to its enemies, shall, from and after the first January, eighteen hundred and sixty-three, be entitled to enter one quarter section or a less quantity of unappropriated public lands, upon which said person may have filed a preemption claim, or which may, at the time the application is made, be subject to preemption at one dollar and twenty-five cents, or less, per acre; or eighty acres or less of such unappropriated lands, at two dollars and fifty cents per acre, to be located in a body, in conformity to the legal subdivisions of the public lands, and after the same shall have been surveyed: Provided, That any person owning and residing on land may, under the provisions of this act, enter other land lying contiguous to his or her said land, which shall not, with the land so already owned and occupied, exceed in the aggregate one hundred and sixty acres.

SEC. 2. And be it further enacted, That the person applying for the benefit of this act shall, upon application to the register of the land office in which he or she is about to make such entry, make affidavit before the said register or receiver that he or she is the head of a family, or is twenty-one years or more of age, or shall have performed service in the army or navy of the United States, and that he has never borne arms against the Government of the United States or given aid and comfort to its enemies, and that such application is made for his or her exclusive use and benefit, and that
said entry is made for the purpose of actual settlement and cultivation, and not either directly or indirectly for the use or benefit of any other person or persons whomsoever; and upon filing the said affidavit with the register or receiver, and on payment of ten dollars, he or she shall thereupon be permitted to enter the quantity of land specified: Provided, however, That no certificate shall be given or patent issued therefor until the expiration of five years from the date of such entry ; and if, at the expiration of such time, or at any time within two years thereafter, the person making such entry ; or, if he be dead, his widow; or in case of her death, his heirs or devisee; or in case of a widow making such entry, her heirs or devisee, in case of her death ; shall. prove by two credible witnesses that he, she, or they have resided upon or cultivated the same for the term of five years immediately  succeeding the time of filing the affidavit aforesaid, and shall make affidavit that no part of said land has been alienated, and that he has borne rue allegiance to the Government of the United States ; then, in such case, he, she, or they, if at that time a citizen of the United States, shall be entitled to a patent, as in other cases provided for by law: And provided, further, That in case of the death of both father and mother, leaving an Infant child, or children, under twenty-one years of age, the right and fee shall ensure to the benefit of said infant child or children ; and the executor, administrator, or guardian may, at any time within two years after the death of the surviving parent, and in accordance with the laws of the State in which such children for the time being have their domicile, sell said land for the benefit of said infants, but for no other purpose; and the purchaser shall acquire the absolute title by the purchase, and be entitled to a patent from the United States, on payment of the office fees and sum of money herein specified.

SEC. 3. And be it further enacted, That the register of the land office shall note all such applications on the tract books and plats of, his office, and keep a register of all such entries, and make return thereof to the General Land Office, together with the proof upon which they have been founded.

SEC. 4. And be it further enacted, That no lands acquired under the provisions of this act shall in any event become liable to the satisfaction of any debt or debts contracted prior to the issuing of the patent therefor.

SEC. 5. And be it further enacted, That if, at any time after the filing of the affidavit, as required in the second section of this act, and before the expiration of the five years aforesaid, it shall be proven, after due notice to the settler, to the satisfaction of the register of the land office, that the person having filed such affidavit shall have actually changed his or her residence, or abandoned the said land for more than six months at any time, then and in that event the land so entered shall revert to the government.

SEC. 6. And be it further enacted, That no individual shall be permitted to acquire title to more than one quarter section under the provisions of this act; and that the Commissioner of the General Land Office is hereby required to prepare and issue such rules and regulations, consistent with this act, as shall be necessary and proper to carry its provisions into effect; and that the registers and receivers of the several land offices shall be entitled to receive the same compensation for any lands entered under the provisions of this act that they are now entitled to receive when the same quantity of land is entered with money, one half to be paid by the person making the application at the time of so doing, and the other half on the issue of the certificate by the person to whom it may be issued; but this shall not be construed to enlarge the maximum of compensation now prescribed by law for any register or receiver: Provided, That nothing contained in this act shall be so construed as to impair or interfere in any manner whatever with existing preemption rights : And provided, further, That all persons who may have filed their applications for a preemption right prior to the passage of this act, shall be entitled to all privileges of this act: Provided, further, That no person who has served, or may hereafter serve, for a period of not less than fourteen days in the army or navy of the United States, either regular or volunteer, under the laws thereof, during the existence of an actual war, domestic or foreign, shall be deprived of the benefits of this act on account of not having attained the age of twenty-one years.

SEC. 7. And be it further enacted, That the fifth section of the act entitled “An act in addition to an act more effectually to provide for the punishment of certain crimes against the United States, and for other purposes,” approved the third of March, in the year eighteen hundred and fifty-seven, shall extend to all oaths, affirmations, and affidavits, required or authorized by this act.

SEC. 8. And be it further enacted, That nothing in this act shall be 80 construed as to prevent any person who has availed him or herself of the benefits of the fir8t section of this act, from paying the minimum price, or the price to which the same may have graduated, for the quantity of land so entered at any time before the expiration of the five years, and obtaining a patent therefor from the government, as in other cases provided by law, on making proof of settlement and cultivation as provided by existing laws granting preemption rights.