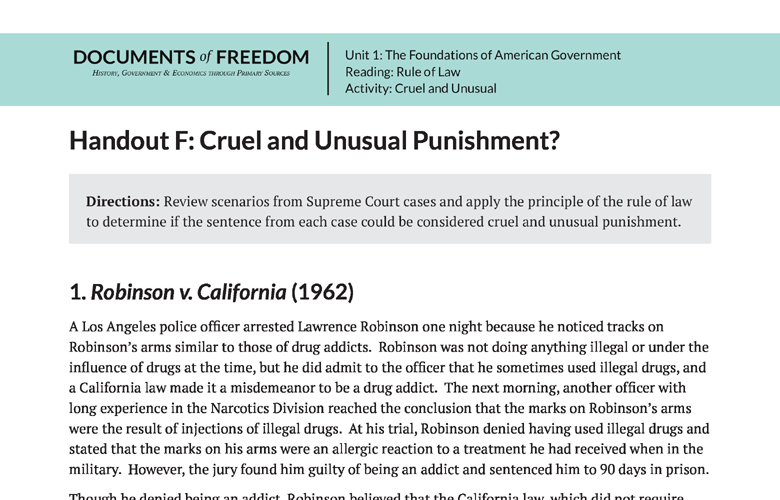 Directions: Review scenarios from Supreme Court cases and apply the principle of the rule of law to determine if the sentence from each case could be considered cruel and unusual punishment.

A Los Angeles police officer arrested Lawrence Robinson one night because he noticed tracks on Robinson’s arms similar to those of drug addicts. Robinson was not doing anything illegal or under the influence of drugs at the time, but he did admit to the officer that he sometimes used illegal drugs, and a California law made it a misdemeanor to be a drug addict. The next morning, another officer with long experience in the Narcotics Division reached the conclusion that the marks on Robinson’s arms were the result of injections of illegal drugs. At his trial, Robinson denied having used illegal drugs and stated that the marks on his arms were an allergic reaction to a treatment he had received when in the military. However, the jury found him guilty of being an addict and sentenced him to 90 days in prison.

Though he denied being an addict, Robinson believed that the California law, which did not require proof that the defendant bought or used illegal drugs in California, nor that he have any drugs in his possession, was a violation of his 8th and 14th Amendment protections against cruel and unusual punishment.

Given these circumstances, was Robinson’s imprisonment upon being convicted of the condition of drug addiction a violation of his Eighth and Fourteenth Amendment protections against cruel and unusual punishment? Why or why not?

In 1967, William Furman broke into a home during the night intending to carry out a burglary. The homeowner heard the noises from the kitchen and came to investigate. Furman turned to flee, and ran out the kitchen door. Furman said he tripped, dropping his gun, which accidentally discharged. Tragically, the shot struck the homeowner in the chest, killing him instantly. Since the murder took place during the commission of a felony, Furman was eligible to receive the death penalty under Georgia law, even though the shooting itself was an accident. Furman was poor, uneducated, and mentally ill, and the jury found him guilty and sentenced him to death in a one-day trial.

Given these circumstances, did the death penalty for Furman violate his Eighth Amendment protection against cruel and unusual punishment? Why or why not?

The Furman decision (1972) invalidated all previously enacted death penalty laws in the U.S. In its post-Furman statute, the Georgia legislature sought to correct the arbitrary, “freakish,” or “random” nature of the imposition of the death penalty in Georgia. This new law provided guidelines regarding the jury’s consideration of both aggravating and mitigating factors, and it required mandatory review by the Georgia Supreme Court of any death penalty sentence.

In 1974 Troy Leon Gregg was convicted of having committed armed robbery and murder of two men who had given him and a companion a ride when they were hitchhiking the previous year. The trial judge was careful to follow all the new law’s guidelines in conducting Gregg’s case. Before it could impose the death penalty, the jury must find at least one of 10 different aggravating circumstances in the crime. Gregg’s jury found that there were 2 aggravating circumstances: he had committed the murders during the commission of other capital crimes (armed robbery), and for the purpose of receiving the victims’ property. The Georgia Supreme Court found that the sentences for murder did not result from prejudice or other arbitrary factors, and upheld the jury’s verdict and sentence.

Given these circumstances, did the death penalty for Gregg violate his Eighth Amendment protection against cruel and unusual punishment? Why or why not?