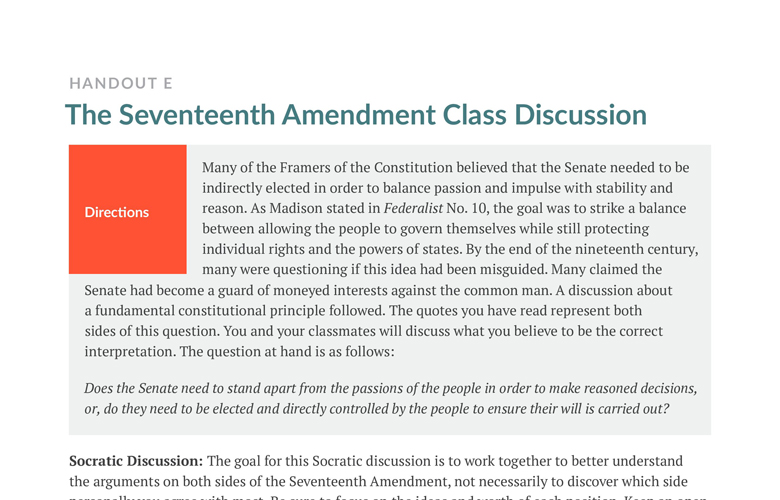 Directions: Many of the Framers of the Constitution believed that the Senate needed to be indirectly elected in order to balance passion and impulse with stability and reason. As Madison stated in Federalist No. 10, the goal was to strike a balance between allowing the people to govern themselves while still protecting individual rights and the powers of states. By the end of the nineteenth century, many were questioning if this idea had been misguided. Many claimed the Senate had become a guard of moneyed interests against the common man. A discussion about a fundamental constitutional principle followed. The quotes you have read represent both sides of this question. You and your classmates will discuss what you believe to be the correct interpretation. The question at hand is as follows:

Does the Senate need to stand apart from the passions of the people in order to make reasoned decisions, or, do they need to be elected and directly controlled by the people to ensure their will is carried out?

Socratic Discussion: The goal for this Socratic discussion is to work together to better understand the arguments on both sides of the Seventeenth Amendment, not necessarily to discover which side personally you agree with most. Be sure to focus on the ideas and worth of each position. Keep an open mind and try to get everyone involved in the discussion.

Discussion Directions: Divide the class in half and arrange the desks in your classroom so that there are two concentric circles (inner/outer) all facing the center. Have one half of the class sit in the inner circle, and the other half in the outer. The inner circle is the discussion panel. The outer circle may only ask questions to help move the discussion productively, but they are not able to actively participate or answer questions. Halfway through the period, the groups will switch places. It may be helpful to have outer circle students sit on the writing surface of their desks in order to more effectively observe the inner circle discussion panel and jot down notes. No question or comment should be disparaged. All responses must be courteous and thoughtful.

Possible discussion questions include the following: