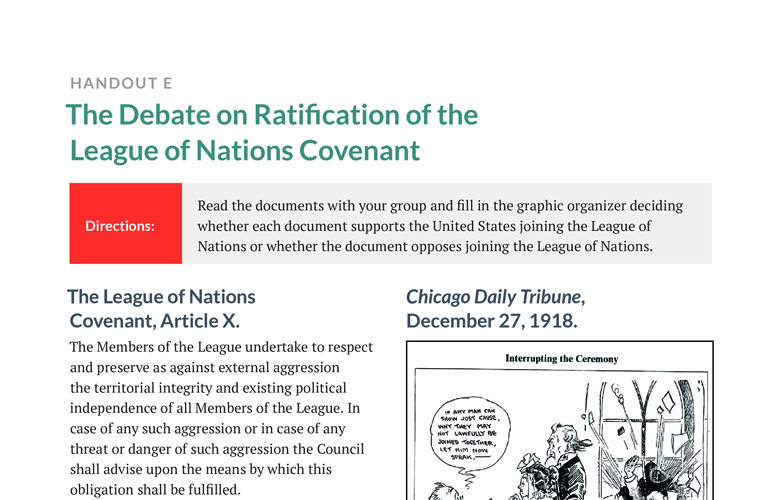 The Debate on Ratification of the League of Nations Covenant

If it is necessary for the security of Western Europe that we should agree to the support, say, of France if attacked, then let us agree to do that particular thing plainly, so that every man and woman in the country will understand the honorable obligation we are assuming. I am in favor of that. But let us not wrap up such a purpose in a vague universal obligation under the impression that it really does not mean anything likely to happen.

Our first ideal is our country, and we see her in the future, as in the past, giving service to all her people and to the world. Our ideal of the future is that she should continue to render that service of her own free will. She has great problems of her own to solve, very grim and perilous problems, and a right solution, if we can attain to it, would largely benefit mankind.

Our ideal is to make her ever stronger and better and finer, because in that way alone, as we believe, can she be of the greatest service to the world’s peace and to the welfare of mankind.

When you read Article X, therefore, you will see that it is nothing but the inevitable, logical center of the whole system of the Covenant of the League of Nations, and I stand for it absolutely. If it should ever in any important respect be impaired, I would feel like asking the Secretary of War to get the boys who went across the water to fight, […] and I would stand up before them and say, ‘Boys, I told you before you went across the seas that this was a war against wars, and I did my best to fulfill the promise, but I am obliged to come to you in mortification and shame and say I have not been able to fulfill the promise. You are betrayed. You have fought for something that you did not get.’

[…] We have got to do one or other of two things – we have got to adopt it or reject it. There is no middle course. You cannot go in on a special-privilege basis of your own. I take it that you are too proud to ask to be exempted from responsibilities which the other members of the League will carry. We go in upon equal terms or we do not go in at all; and if we do not go in, my fellow citizens, think of the tragedy of that result—the only sufficient guaranty to the peace of the world withheld!