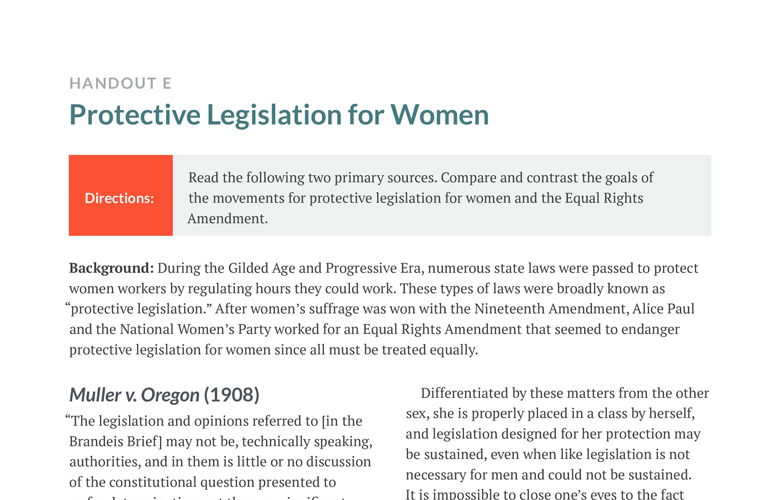 Directions: Read the following two primary sources. Compare and contrast the goals of the movements for protective legislation for women and the Equal Rights Amendment.

Background: During the Gilded Age and Progressive Era, numerous state laws were passed to protect women workers by regulating hours they could work. These types of laws were broadly known as “protective legislation.” After women’s suffrage was won with the Nineteenth Amendment, Alice Paul and the National Women’s Party worked for an Equal Rights Amendment that seemed to endanger protective legislation for women since all must be treated equally.

“The legislation and opinions referred to [in the Brandeis Brief] may not be, technically speaking, authorities, and in them is little or no discussion of the constitutional question presented to us for determination, yet they are significant of a widespread belief that woman’s physical structure, and the functions she performs in consequence thereof, justify special legislation restricting or qualifying the conditions under which she should be permitted to toil….

That woman’s physical structure and the performance of maternal functions place her at a disadvantage in the struggle for subsistence is obvious. This is especially true when the burdens of motherhood are upon her. Even when they are not, by abundant testimony of the medical fraternity continuance for a long time on her feet at work, repeating this from day to day, tends to injurious effects upon the body, and, as healthy mothers are essential to vigorous offspring, the physical wellbeing of woman becomes an object of public interest and care in order to preserve the strength and vigor of the race….

Differentiated by these matters from the other sex, she is properly placed in a class by herself, and legislation designed for her protection may be sustained, even when like legislation is not necessary for men and could not be sustained. It is impossible to close one’s eyes to the fact that she still looks to her brother and depends on him. Even though all restrictions on political, personal and contractual rights were taken away, and she stood, so far as statutes are concerned, upon an absolutely equal plane with him, it would still be true that she is so constituted that she will rest upon and look to him for protection; that her physical structure and a proper discharge of her maternal functions—having in view not merely her health, but the well-being of the race—justify legislation to protect her from the greed as well as the passion of man. The limitations which this statute places upon her contractual powers, upon her right to agree with her employer as to the time she shall labor, are not imposed solely for her benefit, but also largely for the benefit of all. Many words cannot make this plainer. The two sexes differ in structure of body, in the functions to be performed by each, in the amount of physical strength, in the capacity for long-continued labor, particularly when done standing, the influence of vigorous health upon the future well-being of the race, the self reliance which enables one to assert full rights, and in the capacity to maintain the struggle for subsistence. This difference justifies a difference in legislation and upholds that which is designed to compensate for some of the burdens which rest upon her.”

“Men and women shall have equal rights throughout the United States and every place subject to its jurisdiction.”

WRITING ASSIGNMENT: Write a 5-7 sentence response to the following question. Should women be protected by “protective legislation” or by an Equal Rights Amendment, or by some other method, or by no legal action at all?