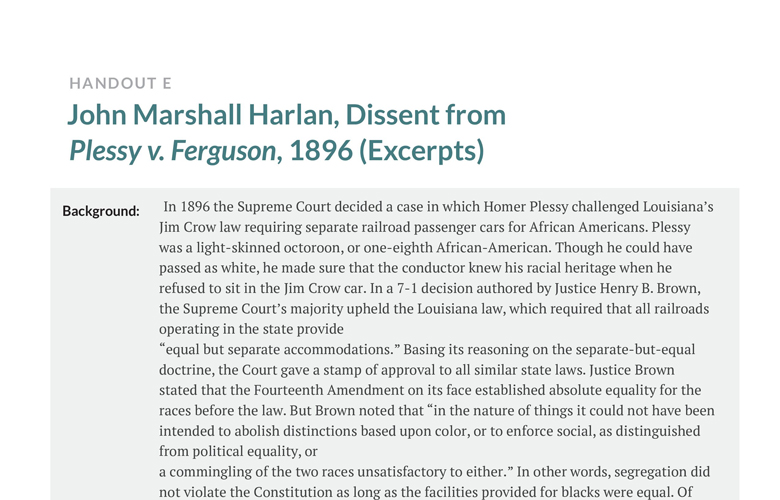 Background: In 1896 the Supreme Court decided a case in which Homer Plessy challenged Louisiana’s Jim Crow law requiring separate railroad passenger cars for African Americans. Plessy was a light-skinned octoroon, or one-eighth African-American. Though he could have passed as white, he made sure that the conductor knew his racial heritage when he refused to sit in the Jim Crow car. In a 7-1 decision authored by Justice Henry B. Brown, the Supreme Court’s majority upheld the Louisiana law, which required that all railroads operating in the state provide “equal but separate accommodations.” Basing its reasoning on the separate-but-equal doctrine, the Court gave a stamp of approval to all similar state laws. Justice Brown stated that the Fourteenth Amendment on its face established absolute equality for the races before the law. But Brown noted that “in the nature of things it could not have been intended to abolish distinctions based upon color, or to enforce social, as distinguished from political equality, or a commingling of the two races unsatisfactory to either.” In other words, segregation did not violate the Constitution as long as the facilities provided for blacks were equal. Of course, they were rarely equal, but the courts were oblivious to such details during the Jim Crow years. Justice John Marshall Harlan was the lone dissenter in Plessy’s case, offering forceful and principled opposition.

…In respect of civil rights common to all citizens, the Constitution of the United States does not, I think, permit any public authority to know the race of those entitled to be protected in the enjoyment of such rights… I deny that any legislative body or judicial tribunal may have regard to the race of citizens when the civil rights of those citizens are involved. Indeed, such legislation as that here in question is inconsistent not only with that equality of rights which pertains to citizenship, National and State, but with the personal liberty enjoyed by everyone within the United States…

The white race deems itself to be the dominant race in this country. And so it is in prestige, in achievements, in education, in wealth and in power. So, I doubt not, it will continue to be for all time if it remains true to its great heritage and holds fast to the principles of constitutional liberty. But in view of the Constitution, in the eye of the law, there is in this country no superior, dominant, ruling class of citizens. There is no caste here. Our Constitution is color-blind, and neither knows nor tolerates classes among citizens. In respect of civil rights, all citizens are equal before the law. The humblest is the peer of the most powerful. The law regards man as man, and takes no account of his surroundings or of his color when his civil rights as guaranteed by the supreme law of the land are involved. It is therefore to be regretted that this high tribunal, the final expositor of the fundamental law of the land, has reached the conclusion that it is competent for a State to regulate the enjoyment by citizens of their civil rights solely upon the basis of race…

In my opinion, the judgment this day rendered will, in time, prove to be quite as pernicious as the decision made by this tribunal in the Dred Scott Case. It was adjudged in that case that the descendants of Africans who were imported into this country and sold as slaves were not included nor intended to be included under the word “citizens” in the Constitution, and could not claim any of the rights and privileges which that instrument provided for and secured to citizens of the United States; that, at the time of the adoption of the Constitution, they were considered as a subordinate and inferior class of beings, who had been subjugated by the dominant race, and, whether emancipated or not, yet remained subject to their authority, and had no rights or privileges but such as those who held the power and the government might choose to grant them…

The arbitrary separation of citizens on the basis of race while they are on a public highway is a badge of servitude wholly inconsistent with the civil freedom and the equality before the law established by the Constitution. It cannot be justified upon any legal grounds.

If evils will result from the commingling of the two races upon public highways established for the benefit of all, they will be infinitely less than those that will surely come from state legislation regulating the enjoyment of civil rights upon the basis of race. We boast of the freedom enjoyed by our people above all other peoples. But it is difficult to reconcile that boast with a state of the law which, practically, puts the brand of servitude and degradation upon a large class of our fellow citizens, our equals before the law. The thin disguise of “equal” accommodations for passengers in railroad coaches will not mislead anyone, nor atone for the wrong this day done.