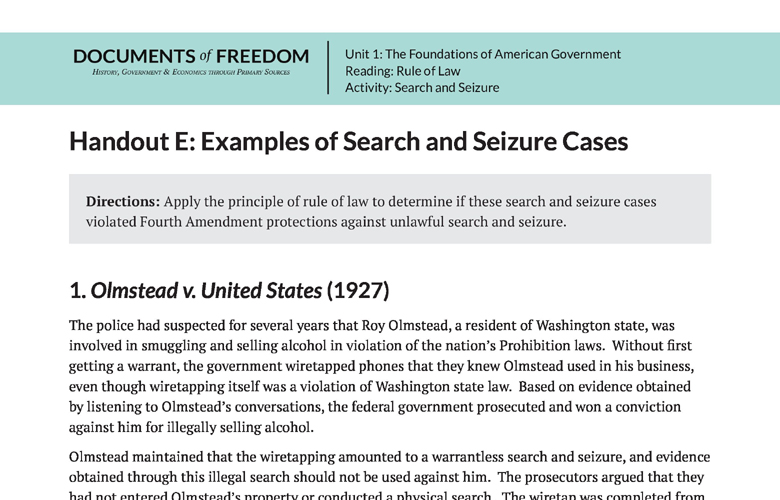 The police had suspected for several years that Roy Olmstead, a resident of Washington state, was involved in smuggling and selling alcohol in violation of the nation’s Prohibition laws. Without first getting a warrant, the government wiretapped phones that they knew Olmstead used in his business, even though wiretapping itself was a violation of Washington state law. Based on evidence obtained by listening to Olmstead’s conversations, the federal government prosecuted and won a conviction against him for illegally selling alcohol.

Olmstead maintained that the wiretapping amounted to a warrantless search and seizure, and evidence obtained through this illegal search should not be used against him. The prosecutors argued that they had not entered Olmstead’s property or conducted a physical search. The wiretap was completed from the outside of his property by accessing telephone lines that were freely available.

Cleveland police, acting on a tip that a bombing suspect had been hiding in the home of Dollree Mapp, demanded entrance. She asked for their warrant and called her lawyer. After several hours and the arrival of additional officers, police claimed to have a warrant, and officers forced their way into the house.

Mapp still demanded to see the warrant. One officer held up a piece of paper, claiming it was a warrant. She grabbed it and put it inside her clothing. An officer recovered it and they carried out a complete search of the house.

The officers found a trunk of “lewd and lascivious” books, pictures, and photographs in Mapp’s basement, along with documentation related to illegal gambling. Mapp was arrested for violating Ohio’s criminal law prohibiting the possession of obscene materials.

At trial, the court found her guilty of possessing the obscene materials based on the evidence presented by police. No warrant was ever produced.

Was this warrantless search of Mapp’s house a violation of her Fourth Amendment protection against unreasonable search and seizure? Why or why not?

Albert Florence was arrested on a warrant for a traffic violation, even though he had already paid the fine. In jail, he was strip searched twice in seven days. Florence filed a lawsuit against jailers, maintaining that the jailhouse searches were unreasonable because he was being held for failure to pay a fine, which is not a crime in New Jersey. Jail officials argued that it was reasonable to search everyone being jailed, even for minor offenses, and even if there is no suspicion that the person may be concealing drugs or a weapon. The need for jailhouse security, they claimed, outweighed any prisoner’s rights against unreasonable search and seizure.

Did these suspicionless searches violate Florence’s Fourth Amendment protection against unreasonable search and seizure? Why or why not?