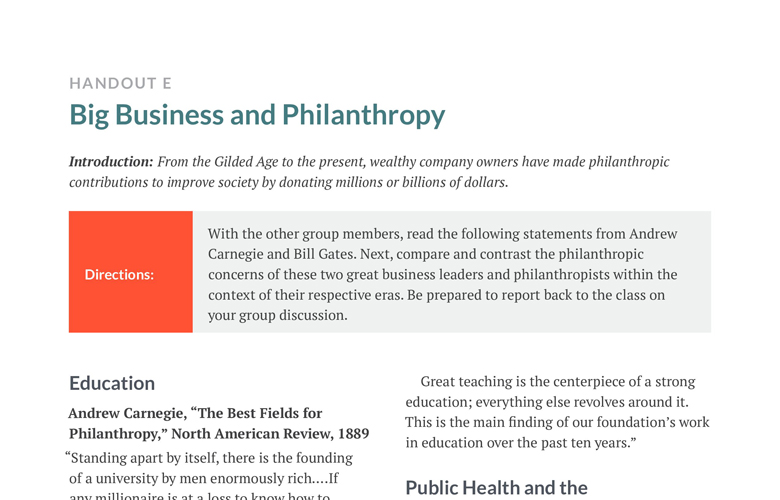 From the Gilded Age to the present, wealthy company owners have made philanthropic
contributions to improve society by donating millions or billions of dollars.

With the other group members, read the following statements from Andrew Carnegie and Bill Gates. Next, compare and contrast the philanthropic concerns of these two great business leaders and philanthropists within the context of their respective eras. Be prepared to report back to the class on your group discussion.

Andrew Carnegie, “The Best Fields for Philanthropy,” North American Review, 1889
“Standing apart by itself, there is the founding of a university by men enormously rich….If any millionaire is at a loss to know how to accomplish great and indisputable good with his surplus, here is a field which can never be fully occupied, for the wants of our universities increase with the development of the country.”

Bill Gates, speech to the American Federation of Teachers, July 10, 2010
We have made public schools our top priority in the United States, because we believe — as you do – that nothing is more important for America’s youth, and nothing means more for the future of the country….
There is a new understanding that school reform must include teacher partnership. If reforms aren’t shaped by teachers’ knowledge and experience, they’re not going to succeed….
There is an expanding body of evidence that says the single most decisive factor in student achievement is excellent teaching….
Great teaching is the centerpiece of a strong education; everything else revolves around it. This is the main finding of our foundation’s work in education over the past ten years.”

Public Health and the Eradication of Disease

Andrew Carnegie, “The Best Fields for Philanthropy,” North American Review, 1889
“We have another most important department in which great sums can be worthily used—the founding or extension of hospitals, medical colleges, laboratories, and other institutions connected with the alleviation of human suffering, and especially with the prevention rather than the cure of human ills.”

Bill Gates, 2010 International AIDS Conference
“This is a challenge we all face. But it does not need to define our time. I am here today because,when it comes to the fight against AIDS, I am still an optimist.
The past 10 years are a time of remarkable progress. Today more than 5 million people are receiving anti retro viral treatment, up from fewer than half a million just six years ago. Since 2001, the rate of new HIV infections has fallen 17 percent.

Those of you in this room helped make this progress possible. The scientists made progress on new tools to fight the disease. The community workers and clinicians drove prevention campaigns. The advocates argued for more funding – and the world responded by adding money for this cause faster than any other health problem in history. The Global Fund has been a fantastic vehicle for making sure this funding helps the people who have the greatest need.”

Andrew Carnegie, “The Best Fields for Philanthropy,” North American Review, 1889
“The result of my own study of the question,What is the best gift which can be given to a community? Is that a free library occupies the first place, provided the community will accept and maintain it as a public institution, as much a part of the city property as its public schools,and, indeed, an adjunct to these….We shall have no antagonism between classes when that day comes, for the high and the low, the rich and the poor, shall then indeed be brothers.”

Bill Gates, speech to the National Urban League, July 27, 2011
“If some people have the latest advances others don’t, it aggravates inequality, and makes things worse. When Melinda and I started to see the outlines of the digital divide, we established a library program to help confront it. We worked with all 50 states and wired 11,000 public libraries with computers and internet access. By the time we were done – if you could get to a public library in America, you could get on the Internet.”