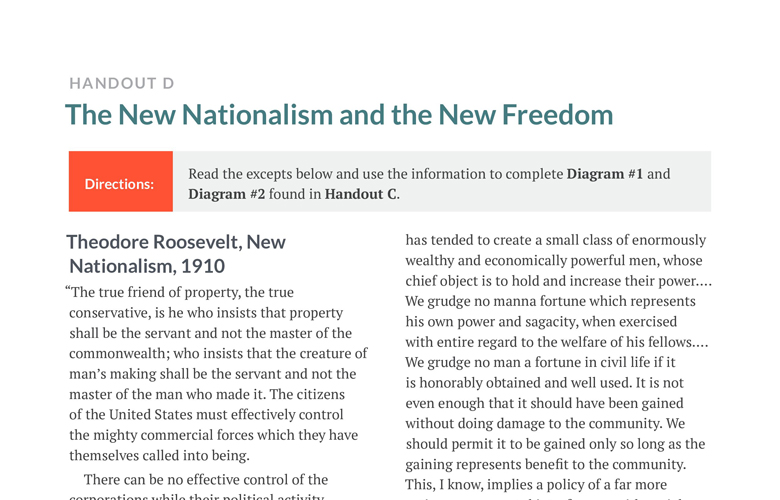 Read the excepts below and use the information to complete Diagram #1 and Diagram #2 found in Handout E.

There can be no effective control of the corporations while their political activity remains. To put an end to it will be neither a short nor an easy task, but it can be done.

We must have complete and effective publicity of corporate affairs, so that the people may know beyond peradventure whether the corporations obey the law and whether their management
entitles them to the confidence of the public….

It has become entirely clear that we must have government supervision of the capitalization, not only of public service corporations, including, particularly, the railways, but of all corporations doing an interstate business. I do not wish to see the nation forced into the ownership of the railways if it can possibly be avoided, and the only alternative is thoroughgoing and effective regulation….

The absence of effective state, and, especially, national, restraint upon unfair money getting has tended to create a small class of enormously wealthy and economically powerful men, whose chief object is to hold and increase their power…. We grudge no manna fortune which represents his own power and sagacity, when exercised with entire regard to the welfare of his fellows…. We grudge no man a fortune in civil life if it is honorably obtained and well used. It is not even enough that it should have been gained without doing damage to the community. We should permit it to be gained only so long as the gaining represents benefit to the community. This, I know, implies a policy of a far more active governmental interference with social and economic conditions in this country than we have yet had, but I think we have got to face the fact that such an increase in governmental control is now necessary….

The American people are right in demanding that New Nationalism, without which we cannot hope to deal with new problems. The New Nationalism puts the national need before sectional or personal  advantage. It is impatient of the utter confusion that results from local legislatures attempting to treat national issues as local issues….This New Nationalism regards the executive power as the steward of the public welfare. It demands of the judiciary that it shall be interested primarily in human welfare
rather than in property, just as it demands that the representative body shall represent all the people rather than any one class or section of the people.”

“We have come upon a very different age from any that preceded us. We have come upon an age when we do not do business in the way in which we used to do business…There is a sense in which in our day the individual has been submerged. In most parts of our country men work, not for themselves, not as partners in the old way in which they used to work, but generally as employees—in a higher or lower grade—of great corporations. There was a time when corporations played a very minor part of our business affairs, but now they play the chief part, and most men are the servants of the corporation…..

Your individuality is swallowed up in the individuality and purpose of a great organization. It is true that, while most men are thus submerged in the corporation, a few, a very few, are exalted to a power which as individuals they could never have wielded. Through the great organizations of which they are the heads, a few are enabled to play a part unprecedented by anything in history in the control of the business operations of the country and in the determination of the happiness of great numbers of people.

Yesterday and ever since history began, men were related to one another as individuals. To be sure there were the family, the Church, and the State, institutions which associated men in certain wide circles of relationship. But in the ordinary concerns of life, in the ordinary work, in the daily round, men dealt freely and directly with one another. Today, the everyday relationships of men are largely with great impersonal concerns, with organizations, not with other individual men. Now this is nothing short of a new social age, a new era of human relationships, a new stage-setting for the drama of life….

They know that America is not a place of which it can be said, as it used to be, that a man may choose his own calling and pursue it just as far as his abilities enable him to pursue it; because today, if he enters certain fields, there are organizations which will use means against him that will prevent his building up a business which they do not want to have built up; organizations will see to it that the ground is cut from under him and the markets shut against him.

American industry is not free, as once it was free; American enterprise is not free; the man with only a little capital is finding it harder to get into the field, more and more impossible to compete with the big fellow. Why? Because the laws of this country do not prevent the strong from crushing the weak. That is the reason, and because the strong have crushed the weak the strong dominate the industry  and the economic life of this country….

No country can afford to have its prosperity originated by a small controlling class….

We used to think in the old-fashioned days when life was simple that all that government had to do was to put on a policeman’s uniform, and say, ‘Now don’t anybody hurt anybody else.’ We used to say that the ideal of government was for every man to be left alone and not interfered with, except when he interfered with somebody else; and that the best government was the government that did as little governing as possible. That was the ideal that obtained in Jefferson’s time. But we are coming now to realize that life is so complicated that we are not dealing with the old conditions, and that the law has to step in and create new conditions under which we may live….

Shall we withhold our hand and say monopoly is inevitable, that all that we can do is to regulate it?….

I don’t care how benevolent the master is going to be. I will not live under a master. That is not what America was created for. America was created in order that every man should have the same chance as every other man to exercise mastery over his own fortunes.”

Handout E: Comparing the New Nationalism and the New Freedom