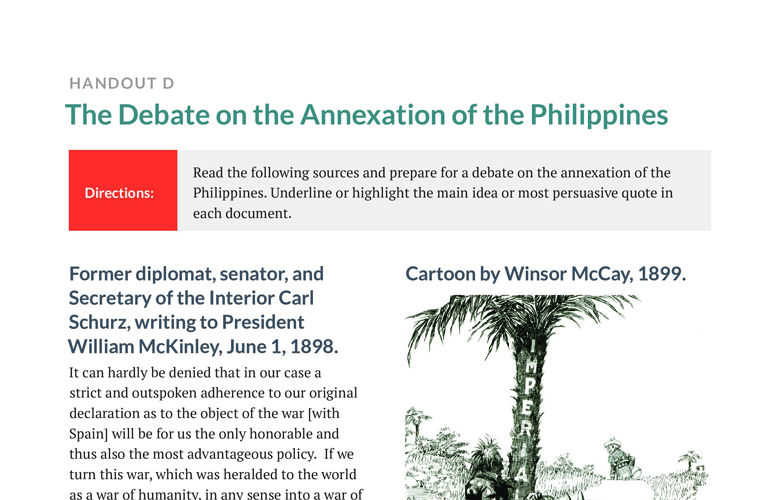 Read the following sources and prepare for a debate on the annexation of the Philippines. Underline or highlight the main idea or most persuasive quote in each document.

It can hardly be denied that in our case a strict and outspoken adherence to our original declaration as to the object of the war [with Spain] will be for us the only honorable and thus also the most advantageous policy. If we turn this war, which was heralded to the world as a war of humanity, in any sense into a war of conquest, we shall forever forfeit the confidence of mankind, and we shall be met with general distrust in our international relations under circumstances which will make that distrust especially troublesome and dangerous. 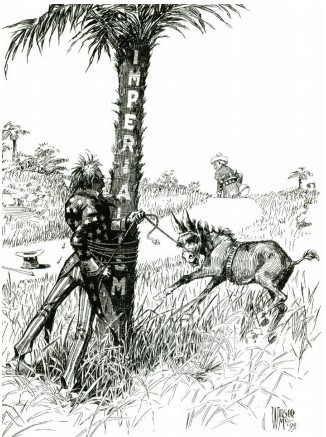 The Filipinos do not need any encouragement from Americans now living. Our whole history has been an encouragement not only to the Filipinos, but to all who are denied a voice in their own government. If the Republicans are prepared to censure all who have used language calculated to make the Filipinos hate foreign domination, let them condemn the speech of Patrick Henry. When he uttered that passionate appeal, ‘Give me liberty or give me death,’ he expressed a sentiment which still echoes in the hearts of men. […] Those who would have this nation enter upon a career of empire must consider not only the effect of imperialism on the Filipinos, but they must also calculate its effects upon our own nation. We cannot repudiate the principle of self-government in the Philippines without weakening that principle here.

I said to myself, here are [the Filipinos] who have suffered for three centuries. We can make them as free as ourselves, give them a government and country of their own, put a miniature of the American constitution afloat in the Pacific, start a brand new republic to take its place among the free nations of the world. It seemed to me a great task to which had addressed ourselves.

But I have thought some more, since then, and I have read carefully the treaty of Paris, and I have seen that we do not intend to free, but to subjugate the people of the Philippines. We have gone there to conquer, not to redeem. . .

It should, it seems to me, be our pleasure and duty to make those people free, and let them deal with their own domestic questions in their own way. And so I am an anti-imperialist.

When I next realized that the Philippines had dropped into our laps I confess I did not know what to do with them. […] I am not ashamed to tell you, gentlemen that I went down on my knees and prayed Almighty God for light and guidance more than one night. And one night late it came to me this way—I don’t know how it was, but it came: (1) That we could not give them back to Spain—that would be cowardly and dishonorable; (2) that we could not turn them over to France and Germany—our commercial rivals in the Orient—that would be bad business and discreditable; (3) that we could not  leave them to themselves—they were unfit for selfgovernment—and they would soon have anarchy and misrule over there worse than Spain’s was; and (4) that there was nothing left for us to do but to take them all, and to educate the Filipinos, and uplift and civilize and Christianize them, and by God’s grace do the very best we could by them, as our fellow-men for whom Christ also died.

Mr. President, the times call for candor. The Philippines are ours forever, ‘territory belonging to the United States,’ as the Constitution calls them. And just beyond the Philippines are China’s illimitable markets. We will not retreat from either. […] The Philippines give us a base at the door of all the East. Lines of navigation from our ports to the Orient and Australia, from the Isthmian Canal to Asia, from all Oriental ports to Australia converge at and separate from the Philippines. They are a self-supporting, dividend-paying fleet, permanently anchored at a spot selected by the strategy of Providence, commanding the Pacific. And the Pacific is the ocean of the commerce of the future. Most future wars will be conflicts for commerce. The power that rules the Pacific, therefore, is the power that rules the world. And, with the Philippines, that power is and will forever be the American Republic.