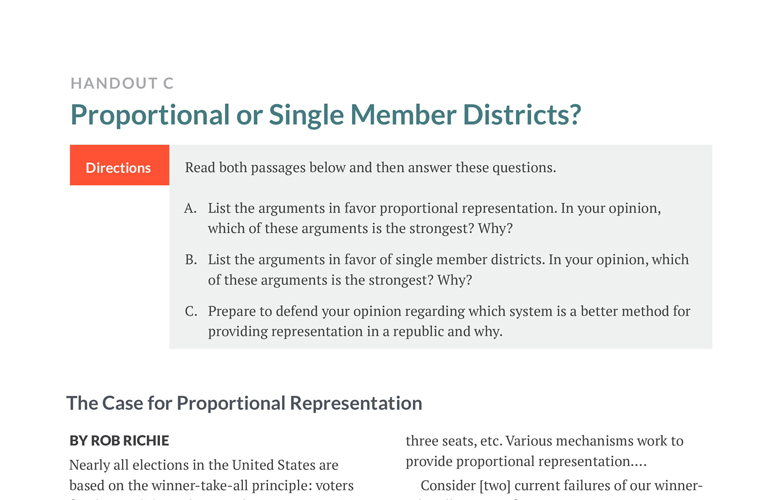 Read both passages below and then answer these questions.

The Case for Proportional Representation

How does this work? A typical winnertake-all system divides voters into “one-seat districts,”  represented by one person. With PR, voters in a constituency instead have several representatives: ten one-seat districts might, for example, be combined into a single ten-seat district. A party or group of voters that wins 10 percent of the popular vote in this district, then, would win one of the ten seats; a party or slate of candidates with 30 percent of votes would win three seats, etc. Various mechanisms work to provide proportional representation….

Consider [two] current failures of our winnertake-all system of representation:

Representation of Racial Minorities. At every level of government, the proportion of black, Latino, and Asian-American elected officials lags far behind these groups’ share of the electorate. When members of a racial or ethnic group make up a majority of the electorate in a winner-takeall election, they tend to elect a member of their racial or ethnic group. Every majority-black U.S. House district has a black representative; and in the 49 white-majority states, 144 of 147 U.S. senators and governors are white. Most racial minorities clearly prefer representatives of their race, but winner-take-all elections often deny them a realistic opportunity to elect candidates of their choice. A quarter of our population is black or Latino, but these groups are in the minority in every state and as a consequence hold only one of 100 U.S. Senate seats. The fact of such under-representation throughout our legislatures undercuts their legitimacy and effectiveness in addressing issues of concern to racial and ethnic minorities.

Two Parties. Winner-take-all elections prop up our two-party monopoly. Since 1960, new parties have formed at comparable rates in the United States and in European democracies using PR. But new parties in the United States are almost completely shut out of representation, whereas half the new parties in the European systems eventually have won seats–and the influence and organizing ability that comes from electoral viability. Polls show most Americans would like to see a third party electing candidates at every level of government, but only three of our nearly eight thousand state and congressional legislators were elected on a minor party ticket– all of them in Burlington, Vermont.

Minor parties by definition begin with minority support, which wins nothing in winnertake-all elections unless it is geographically concentrated. With little chance to win, minority party candidates cannot build or sustain support. Ross Perot’s well-financed independent candidacy in 1992 won 19 percent of the vote, but he did not finish first in any congressional district. In 1996, his vote was reduced by more than half, although one voter in ten still voted for minor-party presidential candidates, and half of all eligible voters saw no reason to participate.

Source: Fair Vote: The Center for Voting and Democracy “The Case for Proportional Representation” (www.fairvote.org) Excerpt from 1998 article used by permission of author

The Case for Single Member Districts (the U.S. System)

The first major advantage for the single member district system that the U.S. uses is strong  accountability. Voters know for whom they voted, and they know whom they can hold accountable if they do not like his votes in Congress. Furthermore, they can also hold the individual member accountable for issues around corruption. Sometimes members of Congress may do things that, while not illegal in a strict sense, are nevertheless troubling. Voters in the U.S. can hold an individual member accountable. In a proportional representation system, voters can only hold the entire party
responsible. In the U.S. system, a voter can use party membership as one criterion for evaluating a member of Congress, but can use others as well. In a proportional system, voters can only select a party, not an individual man or woman. Furthermore, if a constituent has a specific problem with a government agency, they have a person to whom they can turn for help—an ombudsman who can advocate for their individual interests against a faceless executive bureaucracy.

Supporters of proportional representation will point out that there are systems which allow voters to select not only the party they wish to support, but also an individual candidate (the list system), but such systems tend to be extremely confusing to voters, and have the potential to have elections decided by the courts over questions of ballot complexity, rather than by the voters. An example of this type of complexity in Florida’s ballots for the 2000 U.S. presidential election resulted in the Supreme Court decision in Bush v. Gore.

Those who support proportional representation correctly point out that it allows a larger number of parties to have representation in Congress. But this supposed advantage is really a weakness. Under the U.S. system of two broad political parties, the party of the president generally promotes a vision for the role of government in the U.S. The other party can then present an alternative vision, and voters can chose between them. In a proportional system, the governing party will still promote its vision, but instead of a single alternative, voters will be faced with many different visions, and it may not be clear to a voter which alternative will prevail. With confusion over a plethora of alternatives, instability and chaos may reign.

Furthermore, under a proportional system, small parties sometimes gain an influence larger than expected. If there are several parties, and no single party can form a majority in Congress, the larger parties are forced to negotiate with the small parties to accomplish anything. Small parties can then essentially veto legislation of larger parties.