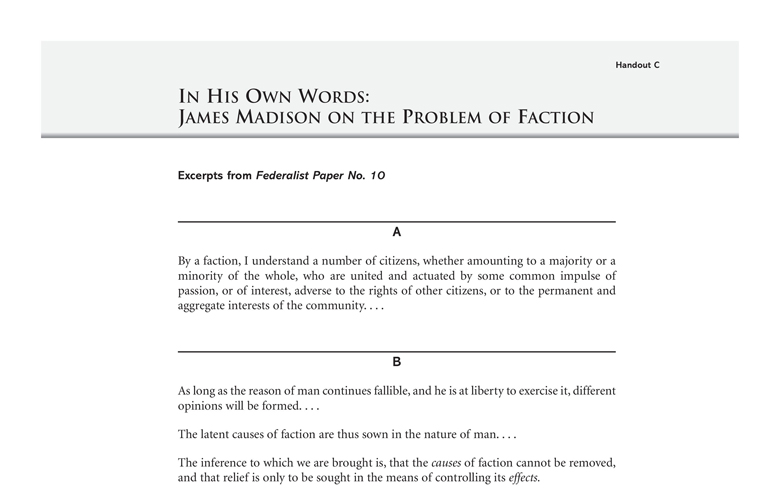 IN HIS OWN WORDS: JAMES MADISON ON THE PROBLEM OF FACTION

Excerpts from Federalist Paper No. 10

By a faction, I understand a number of citizens, whether amounting to a majority or a minority of the whole, who are united and actuated by some common impulse of passion, or of interest, adverse to the rights of other citizens, or to the permanent and aggregate interests of the community….

As long as the reason of man continues fallible, and he is at liberty to exercise it, different opinions will be formed…. The latent causes of faction are thus sown in the nature of man…. The inference to which we are brought is, that the causes of faction cannot be removed, and that relief is only to be sought in the means of controlling its effects.

If a faction consists of less than a majority, relief is supplied by the republican principle, which enables the majority to defeat its sinister views by regular vote….

When a majority is included in a faction, the form of popular government, on the other hand, enables it to sacrifice to its ruling passion or interest both the public good and the rights of other citizens.

To secure the public good and private rights against the danger of such a faction, and at the same time to preserve the spirit and the form of popular government, is then the great object to which our inquiries are directed….

The smaller the society, the fewer probably will be the distinct parties and interests composing it; the fewer the distinct parties and interests, the more frequently will a majority be found of the same party; and the smaller the number of individuals composing a majority, and the smaller the compass within which they are placed, the more easily will they concert and execute their plans of oppression. Extend the sphere, and you take in a greater variety of parties and interests; you make it less probable that a majority of the whole will have a common motive to invade the rights of other citizens; or if such a common motive exists, it will be more difficult for all who feel it to discover their own strength, and to act in unison with each other….