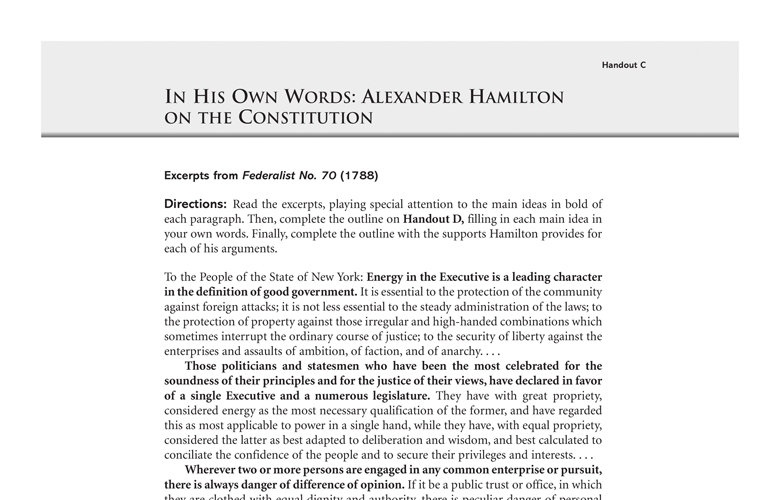 IN HIS OWN WORDS: ALEXANDER HAMILTON ON THE CONSTITUTION

To the People of the State of New York: Energy in the Executive is a leading character in the definition of good government. It is essential to the protection of the community against foreign attacks; it is not less essential to the steady administration of the laws; to the protection of property against those irregular and high-handed combinations which sometimes interrupt the ordinary course of justice; to the security of liberty against the enterprises and assaults of ambition, of faction, and of anarchy….

Those politicians and statesmen who have been the most celebrated for the soundness of their principles and for the justice of their views, have declared in favor of a single Executive and a numerous legislature. They have with great propriety, considered energy as the most necessary qualification of the former, and have regarded this as most applicable to power in a single hand, while they have, with equal propriety, considered the latter as best adapted to deliberation and wisdom, and best calculated to conciliate the confidence of the people and to secure their privileges and interests….

Wherever two or more persons are engaged in any common enterprise or pursuit, there is always danger of difference of opinion. If it be a public trust or office, in which they are clothed with equal dignity and authority, there is peculiar danger of personal emulation and even animosity. From either, and especially from all these causes, the most bitter dissensions are apt to spring. Whenever these happen, they lessen the respectability, weaken the authority. And what is still worse, they could split the community into the most violent and irreconcilable factions….

It is far more safe there should be a single object for the jealousy and watchfulness of the people; and, in a word, that all multiplication of the Executive is rather dangerous than friendly to liberty. . . . The united credit and influence of several individuals must be more formidable to liberty, than the credit and influence of either of them separately. When power, therefore, is placed in the hands of so small a number of men, as to admit of their interests and views being easily combined in a common enterprise, by an artful leader, it becomes more liable to abuse, and more dangerous when abused, than if it be lodged in the hands of one man; who, from the very circumstance of his being alone, will be more narrowly watched and more readily suspected, and who cannot unite so great a mass of influence as when he is associated with others.