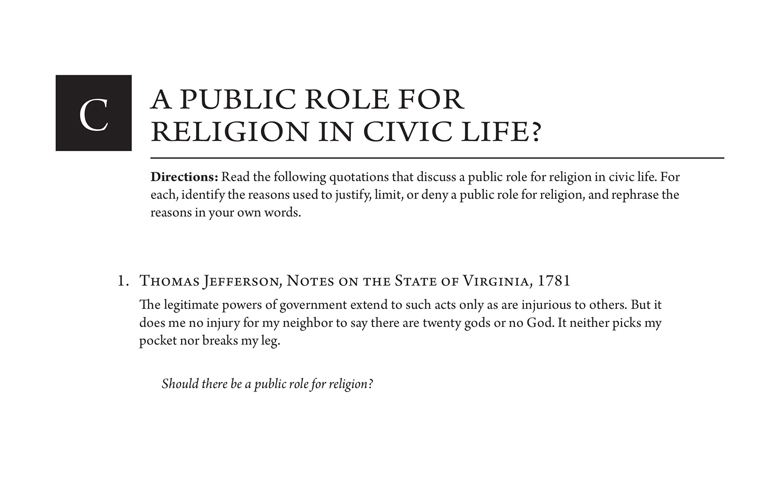 A Public Role for Religion in Civic Life?

1. Thomas Jefferson, Notes on the State of Virginia, 1781

The legitimate powers of government extend to such acts only as are injurious to others. But it does me no injury for my neighbor to say there are twenty gods or no God. It neither picks my pocket nor breaks my leg.

Art. 1: No person, demeaning himself in a peaceable and orderly manner, shall ever be molested on account of his mode of worship or religious sentiments, in the said territory. . . .

Art. 3: Religion, morality, and knowledge, being necessary to good government and the happiness of mankind, schools and the means of education shall forever be encouraged. . . .

3. John Leland, “Right of Conscience Inalienable, and Therefore, Religious Opinions Not Cognizable By The Law,” 1791

Is conformity of sentiments in matters of religion essential to the happiness of civil government? Not at all. Government has no more to do with the religious opinions of men than it has with the principles of the mathematics.

Of all the dispositions and habits which lead to political prosperity, Religion and morality are indispensable supports.… And let us with caution indulge the supposition, that morality can be maintained without religion. Whatever may be conceded to the influence of refined education on minds of peculiar structure, reason and experience both forbid us to expect that National morality can prevail in exclusion of religious principle.