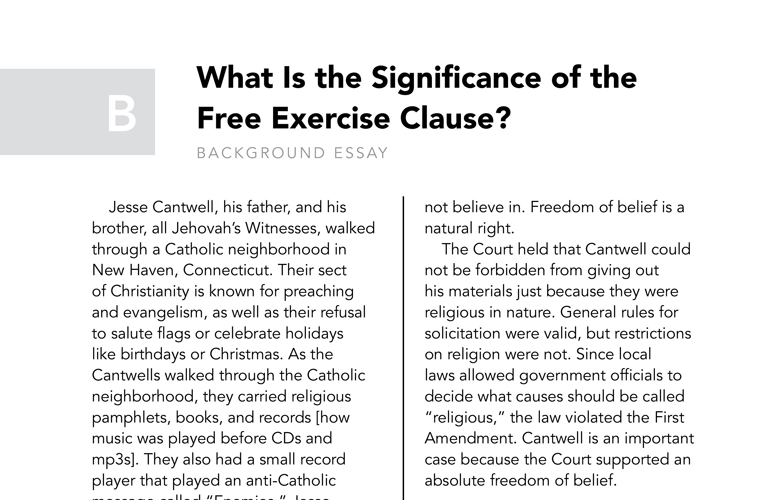 Jesse Cantwell, his father, and his brother, all Jehovah’s Witnesses, walked through a Catholic neighborhood in New Haven, Connecticut. Their sect of Christianity is known for preaching and evangelism, as well as their refusal to salute flags or celebrate holidays like birthdays or Christmas. As the Cantwells walked through the Catholic neighborhood, they carried religious pamphlets, books, and records [how music was played before CDs and mp3s]. They also had a small record player that played an anti-Catholic message called “Enemies.” Jesse Cantwell stopped two men on the street, and the men agreed to listen to the record. The two men were Catholic and were angry when they heard the anti-Catholic record. The Cantwells were later arrested. This led to the landmark decision Cantwell v. Connecticut (1940).

Why is Cantwell an Important Case?

The Court held that Cantwell could not be forbidden from giving out his materials just because they were religious in nature. General rules for solicitation were valid, but restrictions on religion were not. Since local laws allowed government officials to decide what causes should be called “religious,” the law violated the First Amendment. Cantwell is an important case because the Court supported an absolute freedom of belief.

What Are Most Free Exercise Cases About?

Many free exercise cases involve people who believe they have been treated unfairly for practicing their religion. For example, some religions do not permit work on the Sabbath day [a day of the week dedicated to rest or prayer]. The Supreme Court has ruled that states cannot deny unemployment benefits to citizens for turning down a job because it would require work on the Sabbath (Sherbert v. Verner, 1963). In 1985, however, the Court concluded that the First Amendment permitted private employers to fire employees who refused to work on their Sabbath day (Thornton v. Calder, Inc., 1985).

In a famous case (Employment Division v. Smith, 1990), a person was fired for using peyote, an illegal drug. The drugs were used as part of a Native American religious service. The Court ruled that the state government did not have to pay unemployment benefits to the person who lost his job. The state could refuse to give benefits to people who lost their jobs because of illegal activity.

In 2004, a university student was denied a state scholarship because he planned to study theology. In Locke v. Davey (2004), the Supreme Court ruled 7-2 that he was treated fairly since the Free Exercise clause did not require the government to fund religious studies. The two dissenting justices argued that Davey had been targeted for his religious beliefs and therefore had been treated unfairly.

Are Laws About Religious Practices Unconstitutional?

Laws that target one religion or person are always unconstitutional. Laws that apply to all religions are usually constitutional. In Braunfeld v. Brown (1961), the Court approved a Pennsylvania law that said stores must close on Sundays. Orthodox Jews, whose Sabbath is Saturday, claimed the law was unfair to them since their religion required them to also close their stores on Sundays. The Court said that because the law did not target Jews specifically as a group, the law was constitutional.

On the other hand, the Court struck down a Tennessee law that did not allow clergy members to hold public office. In that case (McDaniel v. Paty, 1975), the law targeted people because of their religious line of work.

In 1993, the Court applied the “general law” test to laws passed by four Florida cities. The cities banned animal sacrifice (Church of the Lukumi Babalu Aye v. City of Hialeah). The Court said that these laws actually targeted the Santeria religion, which uses animal sacrifice in prayer. Since they targeted a specific religious group, the laws were unconstitutional.

What About Exceptions within General Laws?

Sometimes, general laws affect religious beliefs and practices. The courts then ask whether or not a reasonable exception [a change to a rule for a person, group, or circumstance] can be made. A famous 1972 ruling (Wisconsin v. Yoder), concluded that Amish teens could be excused from mandatory school attendance laws since their religion says they must live apart from the world and worldly influence.

During the 1980’s, however, the Court ruled that the Amish must pay Social Security taxes (United States v. Lee, 1982). The Air Force could ban Jewish head coverings called yarmulkes (Goldman v. Weinberger, 1986). However, the government must stay out of hiring and firing decisions within a religious organization (Hosanna-Tabor v. EEOC, 2012).

The Affordable Care Act of 2010 [health care legislation] raises many questions about religious exceptions. The Act requires all “non-religious employers” to pay for employee insurance policies. These policies must provide coverage for birth control as well as abortion-inducing drugs even though certain religions forbid some forms of birth control and abortion. Soon after the law was passed, 40 organizations challenged the Act. These organizations say that the government cannot define what is—or is not—a religious employer. These groups also claim that paying for these services would violate their religious beliefs.

People of many different religions live side by side in our free society. Free Exercise cases raise important questions about how the government can treat everyone fairly, yet respect everyone’s right to freely exercise their religion. Can churches make their own decisions about the kinds of weddings they conduct? Can military chaplains preach about their concept of sin? Can organizations at universities receiving public funds limit membership to those who share their belief system? The Supreme Court answered this last question in Christian Legal Society v. Martinez (2010)—and the Court said no. These and similar questions continue to cause debate.