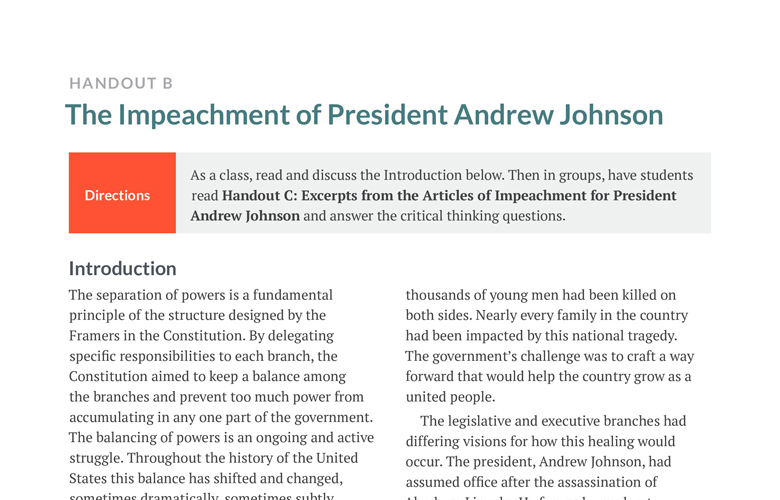 As a class, read and discuss the Introduction below. Then in groups, have students read Handout C: Excerpts from the Articles of Impeachment for President Andrew Johnson and answer the critical thinking questions.

The separation of powers is a fundamental principle of the structure designed by the Framers in the Constitution. By delegating specific responsibilities to each branch, the Constitution aimed to keep a balance among the branches and prevent too much power from accumulating in any one part of the government. The balancing of powers is an ongoing and active struggle. Throughout the history of the United States this balance has shifted and changed, sometimes dramatically, sometimes subtly.

The impeachment power was one tool the Framers designed as a legislative check against executive authority. Article II Section 4 of the Constitution states that, “The President, Vice President and civil officers of the United States, shall be removed from office on impeachment for, and conviction of, treason, bribery, or other high crimes and misdemeanors.” The House of Representatives has the power to bring articles of impeachment, while the Senate has the power to try all impeachments.

In the wake of the Civil War, Congress, feeling its power was being undermined, used the power of impeachment to attempt to remove the President from office.

With the conclusion of hostilities in the Civil War, the nation was left needing to bind up the wounds suffered during the war. Hundreds of thousands of young men had been killed on both sides. Nearly every family in the country had been impacted by this national tragedy. The government’s challenge was to craft a way forward that would help the country grow as a united people.

The legislative and executive branches had differing visions for how this healing would occur. The president, Andrew Johnson, had assumed office after the assassination of Abraham Lincoln. He favored a moderate approach to Reconstruction, calling for leniency for the South. Congress, particularly a group called Radical Republicans, called for a more aggressive plan. Johnson and Congress clashed from the beginning. Exercising his privilege as the executive, he vetoed several major pieces of legislation reasoning, among other things, that they were unconstitutional. In the midterm election of 1867, more Radical Republicans were elected, giving them a veto proof majority in both houses.

After another year of conflict, Congress voted to impeach Johnson. They brought impeachment on the grounds that Johnson violated an act specifically designed to entrap him, and passed over his veto. The act stated the president could not remove anyone from his Cabinet without the consent of the Senate. Johnson believed this law intruded on his privileges as the executive and so he ignored the law, firing Secretary of War Edwin Stanton and replacing him with Major General Lorenzo Thomas. Though Johnson eventually was acquitted, the impeachment trial rocked the nation and raised fundamental questions regarding the roles and constitutional powers of the executive and the legislature.

Below are the formal Articles of Impeachment against President Andrew Johnson. Read them carefully, noting their format and what they say about Congress’s motivations for the impeachment.

Handout C: Excerpts from the Articles of Impeachment of Andrew Johnson