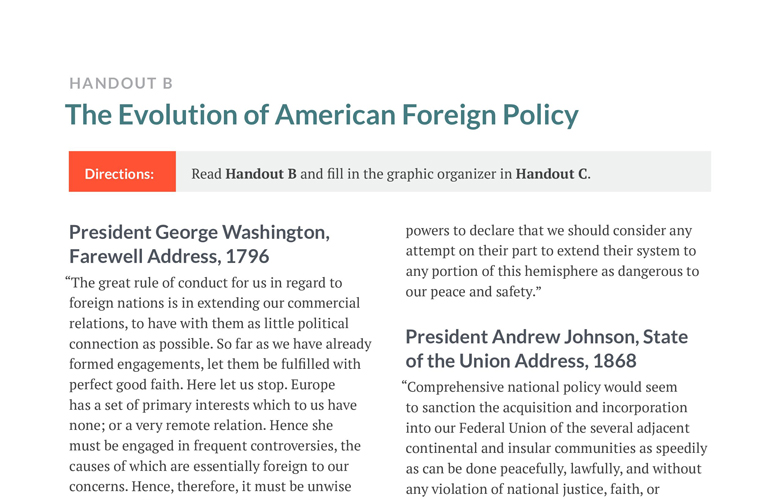 Read Handout B and fill in the graphic organizer in Handout C.

“The great rule of conduct for us in regard to foreign nations is in extending our commercial relations, to have with them as little political connection as possible. So far as we have already formed engagements, let them be fulfilled with perfect good faith. Here let us stop. Europe has a set of primary interests which to us have none; or a very remote relation. Hence she must be engaged in frequent controversies, the causes of which are essentially foreign to our concerns. Hence, therefore, it must be unwise in us to implicate ourselves by artificial ties in the ordinary vicissitudes of her politics, or the ordinary combinations and collisions of her friendships or enmities. […]Why, by interweaving our destiny with that of any part of Europe, entangle our peace and prosperity in the toils of European ambition, rivalship, interest, humor or caprice?”

“As a principle in which the rights and interests of the United States are involved, that the American continents, by the free and independent condition which they have assumed and maintain, are henceforth not to be considered as subjects for future colonization by any European powers[.] …We owe it, therefore, to candor and to the amicable relations existing between the United States and [European] powers to declare that we should consider any attempt on their part to extend their  system to any portion of this hemisphere as dangerous to our peace and safety.”

“Comprehensive national policy would seem to sanction the acquisition and incorporation into our Federal Union of the several adjacent continental and insular communities as speedily as can be done peacefully, lawfully, and without any violation of national justice, faith, or honor. Foreign possession or control of those communities has hitherto hindered the growth and impaired the influence of the United States. Chronic revolution and anarchy there would be equally injurious. Each one of them, when firmly established as an independent republic, or when incorporated into the United States, would be a new source of strength and power.”

“The forcible intervention of the United States as a neutral to stop the war, according to the large dictates of humanity and following many historical precedents where neighboring states have interfered to check the hopeless sacrifices of life by internecine conflicts beyond their borders, is justifiable on rational grounds.”

“Right here let me make as vigorous a plea as I know how in favor of saying nothing that we do not mean, and of acting without hesitation up to whatever we say. A good many of you are probably acquainted with the old proverb: ‘Speak softly and carry a big stick—you will go far.’ If a man continually blusters, if he lacks civility, a big stick will not save him from trouble; and neither will speaking softly avail, if back of the softness there does not lie strength, power. […] Barbarism has, and can have, no place in a civilized world. It is our duty toward the people living in barbarism to see that they are freed from their chains, and we can free them only by destroying barbarism itself. The missionary, the merchant, and the soldier may each have to play a part in this destruction, and in the consequent uplifting of the people. Exactly as it is the duty of a civilized power scrupulously to respect the rights of all weaker civilized powers and gladly to help those who are struggling toward civilization, so it is its duty to put down savagery and barbarism.”

“Our object now, as then, is to vindicate the principles of peace and justice in the life of the world against selfish and autocratic power and to set up amongst the really free and selfgoverned peoples of the world such a concert of purpose and of action as will henceforth insure the observance of those principles. Neutrality is no longer feasible or desirable where the peace of the world is involved and the freedom of its peoples, and the menace to that peace and freedom lies in the existence of autocratic governments backed by organized force which is controlled wholly by their will, not by the will of their people. […] The world must be made safe for democracy. Its peace must be planted upon the tested foundations of political liberty. […] We are but one of the champions of the rights of mankind. We shall be satisfied when those rights have been made as secure as the faith and the freedom of nations can make them.”