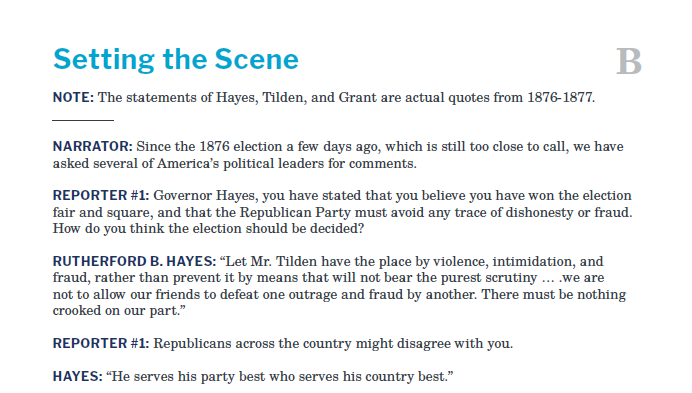 Note: The statements of Hayes, Tilden, and Grant are actual quotes from 1876-1877

NARRATOR: Since the 1876 election a few days ago, which is still too close to call, we have asked several of America’s political leaders for comments.

REPORTER #1: Governor Hayes, you have stated that you believe you have won the election fair and square, and that the Republican Party must avoid any trace of dishonesty or fraud. How do you think the election should be decided?

RUTHERFORD B. HAYES: “Let Mr. Tilden have the place by violence, intimidation, and fraud, rather than prevent it by means that will not bear the purest scrutiny … .we are not to allow our friends to defeat one outrage and fraud by another. There must be nothing crooked on our part.”

REPORTER #1: Republicans across the country might disagree with you.

REPORTER #2: President Grant, you have also expressed an opinion about the possibility of fraud in the recent election.

PRESIDENT ULYSSES S. GRANT: “No man worthy of the office of President should be willing to hold it if counted in or placed there by fraud. Either party can afford to be disappointed in the result, but the country can not afford to have the result tainted by the suspicion of illegal or false returns.”

REPORTER #3: Governor Tilden, you have avoided making public comments about the election. It appears that you have won the popular vote and your supporters are threatening violence if the election is stolen from you. Do you have a statement for us?

SAMUEL TILDEN: “Be satisfied with the reflection that the people are too patriotic, too intelligent, too self-poised, to allow anything perilous to be done that may disturb or destroy our peculiar form of government. Don’t be alarmed.”

REPORTER #3: What do you say to your supporters who shout, “Tilden or Blood!”?

TILDEN: “It will not do to fight. We have just emerged from one Civil War, and it will never do to engage in another; it would end in the destruction of free government. We cannot back down. We can, therefore, only arbitrate.”

NARRATOR: The election’s outcome was settled by a special electoral commission in a process completely outside the provisions of the US Constitution. Hayes became President, but he was called, “Rutherfraud B. Hayes” and “His Fraudulency,” in spite of the fact that he took no part in the process that sent him to the White House.