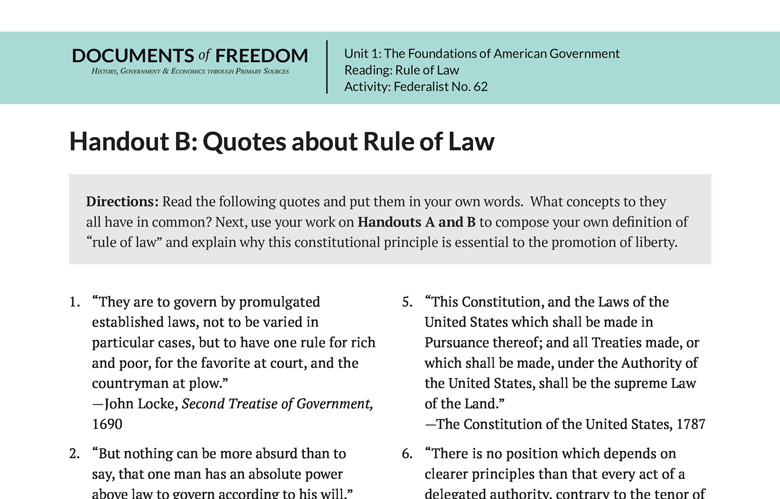 Handout B: Quotes about Rule of Law

Directions: Read the following quotes and put them in your own words. What concepts to they all have in common? Next, use your work on Handouts A and B to compose your own definition of “rule of law” and explain why this constitutional principle is essential to the promotion of liberty.

1. “They are to govern by promulgated established laws, not to be varied in particular cases, but to have one rule for rich and poor, for the favorite at court, and the countryman at plow.”
—John Locke, Second Treatise of Government, 1690

2. “But nothing can be more absurd than to say, that one man has an absolute power above law to govern according to his will.”
—Algernon Sidney, Discourses Concerning Government, 1698

3. “No legislative, supreme or subordinate, has a right to make itself arbitrary.”
—James Otis, “Rights of the British Colonies Asserted and Proved,” 1764

4. “But can his majesty thus put down all law under his feet? Can he erect a power superior to that which erected himself? He has done it indeed by force; but let him remember that force cannot give right.”
—Thomas Jefferson, “A Summary View of the Rights of British America,” 1774

6. “There is no position which depends on clearer principles than that every act of a delegated authority, contrary to the tenor of the commission under which it is exercised, is void.”
—Alexander Hamilton, Federalist No. 78, 1788

7. “No legislative act, therefore, contrary to the Constitution, can be valid.”
—Alexander Hamilton, Federalist No. 78, 1788

8. “To what purpose are powers limited, and to what purpose is that limitation committed to writing, if these limits may, at any time, be passed by those intended to be restrained?”
—John Marshall, Marbury v. Madison, 1803

Write your own definition of “rule of law,” and explain why it is essential to the promotion of liberty.