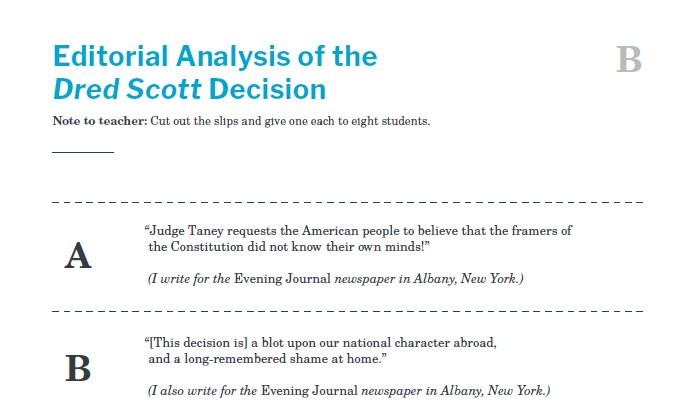 Note to teacher: Cut out the slips and give one to each of eight students

“Judge Taney requests the American people to believe that the framers of the Constitution did not know their own minds!”

(I write for the Evening Journal newspaper in Albany, New York.)

“[This decision is] a blot upon our national character abroad, and a long-remembered shame at home.”

(I also write for the Evening Journal newspaper in Albany, New York.)

“If they would let us alone and leave slavery to the states, and to the same protection and privileges enjoyed by all other property under the Constitution, the agitation of the question would come to an end on the instant.”

(I write for the Enquirer in Richmond, Virginia.)

“Slavery is guaranteed by the constitutional compact!”

(I write for the Mercury newspaper in Charleston, South Carolina.)

“We shall acquire, by the decision of the Supreme Court, not one right more than they granted to us before—not one foot of slave territory more than we would have acquired without it.”

(I also write for the Mercury newspaper in Charleston, South Carolina.)

“The late decision of the Supreme Court of the United States, in the Dred Scott case, will bring the enemies of the South face to face with the Constitution of their country.”

(I write for the Federal Union newspaper in Milledgeville, Georgia.)

“Our liberties may be subverted, our rights trampled upon; the spirit of our institutions utterly disregarded.”

(I write for the Tribune newspaper in New York, New York.)

“It strikes at the very vitals of our free institutions.”

(I write for the Republican Journal newspaper in Columbus, Wisconsin.)