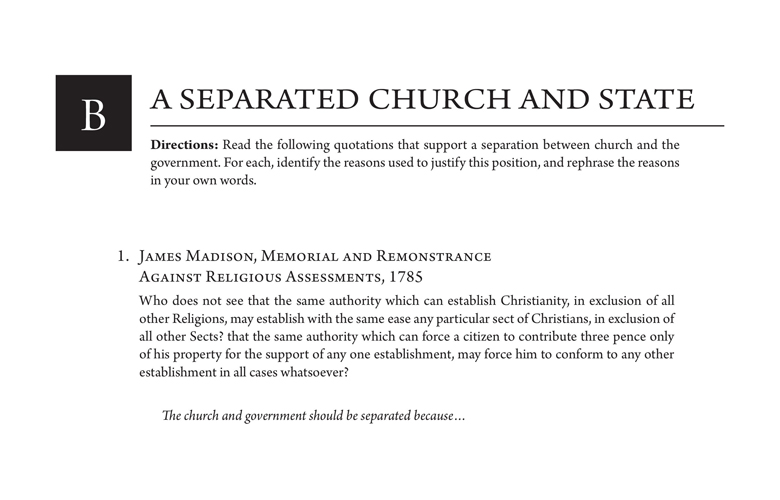 A Separated Church and State

Directions: Read the following quotations that support a separation between church and the government. For each, identify the reasons used to justify this position, and rephrase the reasons in your own words.

Who does not see that the same authority which can establish Christianity, in exclusion of all other Religions, may establish with the same ease any particular sect of Christians, in exclusion of all other Sects? that the same authority which can force a citizen to contribute three pence only of his property for the support of any one establishment, may force him to conform to any other establishment in all cases whatsoever?

During almost fifteen centuries has the legal establishment of Christianity been on trial. What have been its fruits? More or less in all places, pride and indolence in the Clergy, ignorance and servility in the laity, in both, superstition, bigotry and persecution.

When a Religion is good, I conceive that it will support itself; and, when it cannot support itself, and God does not take care to support, so that its Professors are oblig’d to call for the help of the Civil Power, it is a sign, I apprehend, of its being a bad one.

A test [requirement] in favour of any one denomination of Christians would be to the last degree absurd in the United States. If it were in favour of either Congregationalists, Presbyterians, Episcopalians, Baptists, or Quakers, it would incapacitate more than three-fourths of the American citizens for any public office; and thus degrade them from the rank of freemen.

Handout A: A Connected Church and State