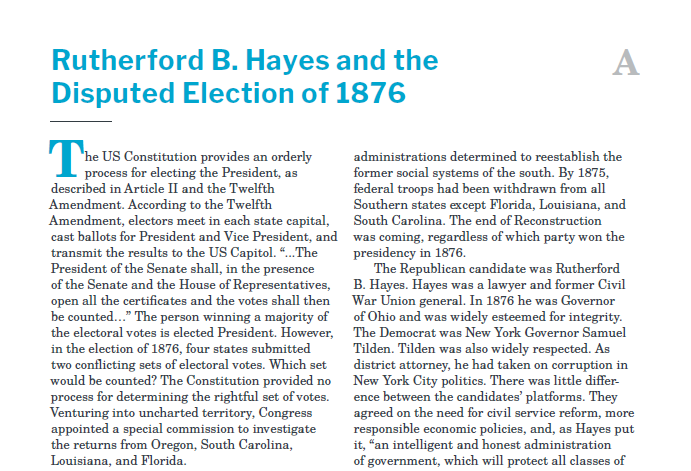 The US Constitution provides an orderly process for electing the President, as described in Article II and the Twelfth Amendment. According to the Twelfth Amendment, electors meet in each state capital, cast ballots for President and Vice President, and transmit the results to the US Capitol. “…The President of the Senate shall, in the presence of the Senate and the House of Representatives, open all the certificates and the votes shall then be counted…” The person winning a majority of the electoral votes is elected President. However, in the election of 1876, four states submitted two conflicting sets of electoral votes. Which set would be counted? The Constitution provided no process for determining the rightful set of votes. Venturing into uncharted territory, Congress appointed a special commission to investigate the returns from Oregon, South Carolina, Louisiana, and Florida.

The “Last Battle of the Civil War”

The election of 1876 has been called the “last battle of the Civil War.” The entire nation was weary of Reconstruction. Northerners, concerned about economic depression and corruption in their own states, no longer worried about the civil rights of Southern blacks.

Southerners were tired of federal interference in their politics. After the Civil War, federal troops had been stationed throughout the South in order to keep the peace and protect the rights of former slaves. As the troops left, the Republican state governments established under Reconstruction were replaced by all-white, Democratic administrations determined to reestablish the former social systems of the south. By 1875, federal troops had been withdrawn from all Southern states except Florida, Louisiana, and South Carolina. The end of Reconstruction was coming, regardless of which party won the presidency in 1876.

The Republican candidate was Rutherford B. Hayes. Hayes was a lawyer and former Civil War Union general. In 1876 he was Governor of Ohio and was widely esteemed for integrity. The Democrat was New York Governor Samuel Tilden. Tilden was also widely respected. As district attorney, he had taken on corruption in New York City politics. There was little difference between the candidates’ platforms. They agreed on the need for civil service reform, more responsible economic policies, and, as Hayes put it, “an intelligent and honest administration of government, which will protect all classes of citizens…” in the South.

In South Carolina, Louisiana, Florida, and Oregon, each party claimed victory and charged the opponent with fraud. In Oregon, a single elector was challenged as being ineligible.

In the three Southern states, Reconstruction Republican governments were still in control. In South Carolina, Louisiana, and Florida, each state had a “returning board” whose task was to throw out fraudulent votes. The Republican-controlled boards identified widespread Democratic fraud. In reality, both parties used violence and intimidation: Democrats to prevent blacks from voting, and Republicans to ensure that blacks voted Republican. Both sides bought votes.

The state returning boards determined that Hayes had won the decision—and the electoral vote—in each case. However, Democratic electors met and voted in these state capitals anyway. The result was that two sets of electoral votes were sent to Washington, D.C. from each of these Southern states.

The Constitution does not address a situation where states submit conflicting sets of electoral votes. Congress created its own solution: a special electoral commission to investigate the disputed results. The commission included Senators, Representatives, and Supreme Court Justices—seven Democrats and eight Republicans.

Beginning Feb. 1, 1877, before a joint session of the House and Senate, electoral reports from the states were opened in alphabetical order. For the next few weeks, the electoral commission listened to testimony from lawyers on both sides as each disputed state’s turn came. Each time the vote was eight to seven to award the state to Hayes. The Democrats in Congress tried various stalling strategies, but when the last of the electoral votes was counted on March 2, Hayes had received all twenty of the disputed electoral votes and won the election by 185 – 184.

On Monday, March 5, 1877, Rutherford B. Hayes was sworn in as the nineteenth President of the United States, and soon the last of the federal troops were removed from the South. The closest election in our history up to that point had been settled in a manner not provided by the Constitution.