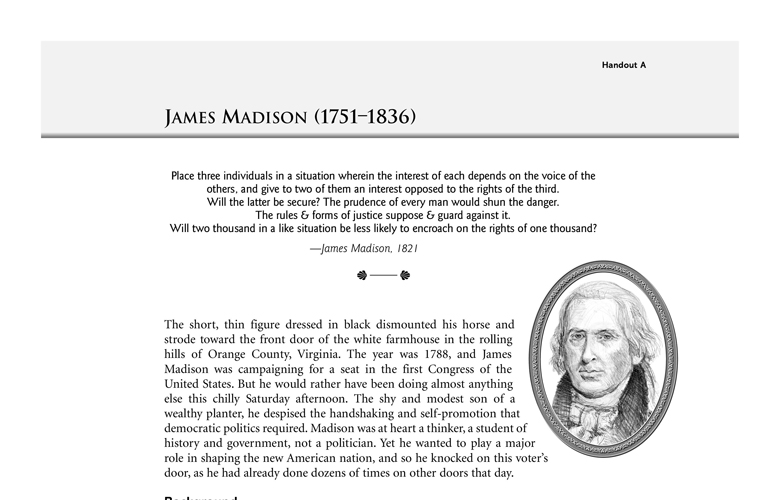 Place three individuals in a situation wherein the interest of each depends on the voice of the others, and give to two of them an interest opposed to the rights of the third. Will the latter be secure? The prudence of every man would shun the danger. The rules & forms of justice suppose & guard against it. Will two thousand in a like situation be less likely to encroach on the rights of one thousand? – James Madison (1821)

The short, thin figure dressed in black dismounted his horse and strode toward the front door of the white farmhouse in the rolling hills of Orange County, Virginia. The year was 1788, and James Madison was campaigning for a seat in the first Congress of the United States. But he would rather have been doing almost anything else this chilly Saturday afternoon. The shy and modest son of a wealthy planter, he despised the handshaking and self-promotion that democratic politics required. Madison was at heart a thinker, a student of history and government, not a politician. Yet he wanted to play a major role in shaping the new American nation, and so he knocked on this voter’s door, as he had already done dozens of times on other doors that day.

James Madison did not look the part of a nation builder. He was short (only five feet, six inches in height), thin, and introverted. In poor health throughout his life, he often believed that death was near. His favorite attire was black clothing, a fitting sign of his usual dark mood. But Madison’s slight appearance and somber demeanor masked a brilliant and determined man.

Born on March 16, 1751, Madison was raised on his father’s plantation, Montpelier, in Orange County, Virginia. At the age of nineteen, he entered the College of New Jersey (later Princeton University), graduating two years later. Madison then began studies for the Christian ministry.

In 1772, Madison returned to Virginia. Rejecting the idea of the ministry, he turned his attention to politics and embraced the patriot cause. In 1775, he was appointed to the Orange County Committee of Safety. Later he was elected to the Virginia convention.

Because of his poor health, Madison did not fight in the American Revolution. Instead, he continued his political career. During the 1780s, he served in the Virginia House of Delegates and the Continental Congress. As a member of Congress, he witnessed firsthand the inability of the government under the Articles of Confederation to address many of the problems among the states. Convinced that the Articles were too weak and needed to be altered or replaced, Madison set out on a determined campaign to organize a meeting of the states to discuss amending the Articles. He met with some success in regional meetings: the Mount Vernon Conference of 1785 and the Annapolis Convention of 1786. At Annapolis, Madison and other delegates began to organize a general meeting of all the states.

In 1786 and 1787, Madison began planning for this national convention by writing out his thoughts on government. He explored how nations with weak central governments tended to fall apart. He explained why the central government created by the Articles of Confederation was too weak to solve problems among and within the states.

Central to Madison’s political theory was the idea that people tend to be guided by their “passions,” defined as feelings of self-interest. People usually seek to advance their own interests at the expense of others. They then form groups with others who have the same goals. Madison called these groups “factions” and feared that in a democratic society a majority faction would oppress the minority.

“Father of the Constitution”

Madison was pleased when a meeting of all the states was set for the summer of 1787 in Philadelphia. (Rhode Island was the only state that failed to attend.) So eager was he that he arrived in the city eleven days early to prepare his plans.

Many of Madison’s ideas were embodied in the Virginia Plan, which was proposed by the Virginia delegation early in the convention. This plan called for a national government with powers separated among the legislative, executive, and judicial branches. The legislature would be split into two houses, a concept called bicameralism. The executive and judicial branches would constitute a council of revision, which could veto acts passed by the legislature. Madison also included in the Virginia Plan a provision giving the federal government the power to veto state laws.

Madison played a major role in the debates as the convention proceeded. He spoke often in support of his ideas and designed compromises to break gridlocks. He also took detailed notes on the debates at the end of each day. Because the debates were secret, Madison’s notes provide a valuable record of what happened during the convention.

On September 17, 1787, after weeks of debate, the delegates approved the Constitution. This final version closely resembled the main outlines of the Virginia Plan.

The Constitution was then sent to the states for ratification. But there was significant opposition to the document throughout the nation. Therefore, Madison joined with Alexander Hamilton and John Jay in composing a series of newspaper essays that defended the Constitution. Though intended for New York newspaper readers, the essays were also read in other states and helped to convince many to support the Constitution. They became known as the Federalist Papers. Madison wrote twenty-nine of the eighty-five essays, including two of the most famous, Nos. 10 and 51.

Madison attended the ratification convention in his home state of Virginia. There he battled Anti-Federalist forces led by Patrick Henry, whose main objection to the Constitution was that it lacked a bill of rights. Madison at first opposed a bill of rights for several reasons: first, he argued that the rights of the people were already implied in the Constitution; second, he worried that any such listing of rights would surely omit some rights held by the people; and third, he believed that written lists of rights were not effective in protecting the liberty of the people. But Madison finally promised the Anti-Federalists that a bill of rights would be adopted after the new government went into effect.

During the debate, the Constitution went into effect when New Hampshire became the ninth state to ratify it on June 21, 1788. Four days later, Virginia also approved the Constitution, and New York did so on July 26.

Madison was elected to the United States House of Representatives in 1789. One of his first actions was to guide a bill of rights through Congress. Madison proposed a list of seventeen amendments, of which Congress approved twelve. Ten of the twelve were ratified by the states, and in 1791 the ten amendments known as the Bill of Rights were added to the Constitution.

Madison served eight years in the House of Representatives. During this time, he helped Thomas Jefferson organize the Democratic-Republican Party, which was formed to oppose the nationalist policies of Secretary of State Alexander Hamilton. Once in favor of a stronger central government, Madison now worried that the states could become the only strongholds against tyrannical federal power. In 1798, Madison wrote the Virginia Resolutions, which suggested that states could block unconstitutional federal laws.

In 1801, Thomas Jefferson became president. He appointed Madison as secretary of state. Madison succeeded Jefferson as president in 1809. His eight years as chief executive were troubled. The country sank into an economic depression. In 1812, the United States and Britain went to war. The United States was ill prepared. The White House itself was burned by British troops, and Madison and his wife, Dolley, were forced to flee the capital. In 1815, Britain and the United States signed the Treaty of Ghent, ending the war.

After serving as president for two terms, Madison retired to his Montpelier home. At his estate, some 100 slaves continued to toil. Despite his opposition to slavery, Madison never freed any of his slaves, not even upon his death. He knew that blacks could not immediately prosper in American society and that, therefore, sudden emancipation would be a disaster for all.

Madison stayed involved with public life by helping President James Monroe with foreign policy. He also helped Jefferson found the University of Virginia and served as its rector from 1826–1836.

Several years after the states ratified the U.S. Constitution, an admirer of James Madison labeled him “the Father of the Constitution.” Madison rejected the title, rightly claiming that the document was “the work of many heads & many hands.” He died at his home on June 28, 1836, at the age of eighty-five, the last of the Founders to die. Madison himself was surely surprised to have lived so long.